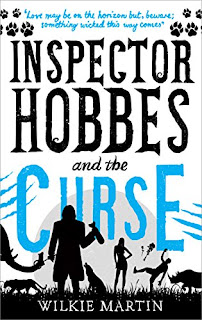 Someone – or something – has just killed a sheep.  It sounds like a pretty small, dull crime to investigate, but Andy Caplet tags along with Inspector Hobbes anyway.

Someone – or something – has been killing pheasants.  Maybe the sheep-killer likes to vary its source of nourishment.  Or maybe the two cases are completely unrelated.  That seems like something that Hobbes should be able to figure out without too much difficulty.

Skeleton Bob says he saw a huge cat prowling around the countryside last night.  Maybe that’s what’s been killing the critters.  Or maybe Skeleton Bob is trying to throw Hobbes off the track, since he's known to occasionally partake in poaching.  That makes him a prime suspect in all of this.

There is one very strange facet to the investigation though.  Inspector Hobbes has a nose that’s as good as a bloodhound’s..  No one is quite sure why, and no one wants to ask him about it.  Yet in sniffing around while looking for clues in these killings, Hobbes keeps finding, then losing, the scents.

What’s To Like...
Inspector Hobbes and the Curse is the second novel in a (completed?) four-book “paranormal sleuthing” series with Andy playing Dr. Watson to Inspector Hobbes’s Sherlock Holmes.  It is written in the first-person point-of-view, Andy’s, which is entertaining since he’s subject to more pratfalls than a Chevy Chase routine.

Wilkie Martin neatly weaves a slew of plotlines together, namely:
a.) Who’s killing the sheep and pheasants?
b.) Did Skeleton Bob really see a big cat?
c.) What’s behind the hidden door in Inspector Hobbes’s basement?
d.) Who, or what, are Violet and Felix?
e.) Why would someone want an elephant transported to Brighton?
f.) Who killed the hot-headed neighbor, and why?
g.) Who killed the thug, and why?
h.) Who, or what, is Hobbes?
I’m happy to say that you'll find all these questions answered in this book, save one.

The story is set in the present-day greater London area.  There’s a nice variety of critters to meet and flee from, including (but not limited to) werewolves, vampires, troglodytes (huh?) and even a muppet (double-huh?).  Wilkie Martin is British, and it was fun to be “immersed” in English daily life, such as ginger beer, pork rolls with apple sauce, Sugar Puffs, and calling “999” for an emergency instead of “9-1-1”.

I enjoyed attending the First Annual Grand Sorenchester Music Festival, even if things did get out of hand.  Hobbes and Mrs. Goodfellow say they attended the 1967 Monterrey Festival and hung out with the hippies, so I wonder how the two festivals compare to each other.  And I’m almost tempted to get the audiobook version of this book just  to hear Hobbes do his rendition of Puff, The Magic Dragon.  Amid all the craziness, Wilkie Martin subtly examines some more-serious themes, namely spousal abuse and the manliness of hunting.

Inspector Hobbes and the Curse is written in English, not American, and there are a slew of new terms for common items to suss out, including: doddle, moggy, jacket potato, pong, fly sheet, footwell, settles, bin liner, skint, bleeper, scarper, AGM, spotty herbert, dust-dancers, cutlery draw, shufti, picnic hamper, stodge, going to the Casualty, skip, ‘having me on’, pebble-dashed, top up, nutters, lay-by, slowcoach, selvedge, tosser, punters, dozy, bacon-butties, and ‘trying it on’.

The ending is decent, with an fair amount of excitement mixed with a twist or two to keep everyone on their toes.  A good bottle of wine gets wasted, and some of the baddies get away, but that’s the way the biscuit crumbles, and perhaps those evildoers might appear in the subsequent books.

A tongue of hot red flame hurled him and the door across the cellar and, though it all happened so fast, I’m sure he whooped just before he slammed into the back wall.  There was a deafening roar, a flash of heat and a rumble.
I picked myself up, coughing in the dust haze.
“Well,” said Hobbes, standing up, rubbing his elbow, “that would have been more fun if the wall hadn’t got in the way.”  (loc. 10318)

“Hanging round crematoriums always gives me an appetite.”  (loc. 7648 )
There’s nothing major to quibble about in Inspector Hobbes and the Curse.  Wilkie Martin calls this a “Humorous British Detective Cozy Mystery Fantasy” and who am I to argue with him?  Still, if you’re a “cozy” enthusiast, you may find the cussing, which albeit is minimal in quantity, to be out-of-place.

Also, if you’re reading this book for its mystery element, you may be disappointed.  I figured out the “who did what and how and why” early on.  Andy Caplet is not the brightest bulb in the chandelier, but I found it hard to believe that Inspector Hobbes took so long to figure things out.

However, all this is nitpicking.  I think it’s better to read Inspector Hobbes and the Curse for its zany “Jeeves-like” humor, not its whodunit.  When you take that approach, you’ll likely find this to be an excellent read.

7½ Stars.  Subtract ½ Star if you don’t like books written in “English”.  I happen to think it’s a delightful way to learn a "foreign" language.
Posted by Hamilcar Barca at 6:46 PM