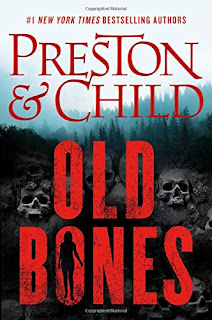 The ill-fated Donner expedition achieved dubious but lasting fame when they became stranded in the high Sierra Nevada mountains during the brutal winter of 1846-47 and had to resort to cannibalism to keep from starving.

Based on information supplied by a direct descendant of one of those pioneers, archaeologist Dr. Nora Kelly has applied for a grant to search for the campsite of a small group of the Donner party that splintered off.  Grants are generally hard to get, but Nora is optimistic since there are  rumors that one of the settlers was carrying a chest of gold coins on the trip, with a present-day worth of twenty million dollars.  Greed creates grant money.

Meanwhile, newly-graduated FBI Agent Corrie Swanson grows weary of her agency apprenticeship, and has finally been given an investigation of her own to pursue.  Someone has dug up an old historical grave and made off with the upper half of the corpse.  The graveyard is on Federal land, and that means the FBI has jurisdiction.

Nora and Corrie don’t know it, but they’ve both worked in the past with another FBI guy – Special Agent Aloysius Pendergast.  That might be an ice-breaker when the two of them cross paths in the Sierra Nevada wilderness and are forced to team up.

But both have headstrong personalities and they might find each other to be uncooperative and arrogant. I wonder how Aloysius would handle this.

What’s To Like...
Both Nora Kelly and Corrie Swanson have previously been protagonists in Douglas Preston & Lincoln Child novels, Nora in Thunderhead (reviewed here), and Corrie in White Fire (reviewed here).  In Old Bones they now seem to be “promoted” to a series of their own, one that will presumably have a heavy emphasis on archaeology, which I count as a plus.  It will be interesting to see how Preston and Child come up with enough old ruins and baddies to keep our two protagonists busy.

There's a bunch of mysteries and intrigue here to keep your interest.  Will the “Lost Camp” of the Donner party be found?  Was there really a chest of gold, and if so, will it be found?  What does a murder in Paris in the prologue have to do with anything?  Who’s stealing the corpses, and why?  And finally, why are people in Nora’s archaeological expedition turning up dead?

I like the initial interplay between Nora and Corrie when they meet.  You’d expect them to be palsy-walsy right away, and that isn’t the case.  Neither one of them “plays well with others”, especially with their underlings and overlings.  Yet I felt that Old Bones portrays both characters at their best (so far), and I’m guessing they both will be learning tact and finesse as the series progresses.

The mention of New Hampshire’s “The Old Man of the Mountain” brought back pleasant childhood memories.  It’s a shame that it has since fallen down.  You'll l;earn a little bit of French from the story, including a cuss phrase.  There’s even a small amount of the patented Preston-&-Child motif “is it natural or supernatural?”  No one does that better than those guys.

The ending is somewhat predictable yet suitably exciting.  There were a couple of plot twists to keep me on my toes, and I was only half-right about who the perp was.  Aloysius Pendergast only has a small cameo appearance, and it isn’t until the epilogue.  His main purpose seems to be toquickly and cerebrally solve the remaining unresolved puzzles.

Excerpts...
“How is it possible,” he asked, “that a man as experienced in the wilderness as Peel would fall off a cliff like this?”
“Late at night,” Wiggett replied.  “The moon had set.  He’s collecting rocks for his grave.  He’s agitated, upset, not thinking clearly.”
“Maybe even had a drink or two,” Clive added.
“Peel didn’t drink.”  (pg. 226)

He raised his head and cleared his throat.  “Samantha Carvilleae ossua heic.  Fortuna spondet multa multis, preastat nemini, vive in dies et horas, nam proprium est nihil.”
Corrie looked at Pendergast.  “What exactly does that mean?”
“Here lie the bones of Samantha Carville.  Fortune makes promises to many, keeps them to none.  Live for each day, live for the hours, since nothing is forever yours.”
“That’s rather dark,” said Corrie.
“It’s a favorite quote of my ward, Constance.  Besides, the graveside is no place for pleasantries.”  (pg. 362)

“You grow up thinking everything’s fine and bad things happen to other people, and then, out of the blue, life drops a piano on you.”  (pg. 147 )
There are a couple of things to nitpick about.  There’s some cussing in any Preston & Child novel, but here it felt excessive, especially in the early chapters.  I didn’t feel like it added much to the book’s “feel”, and I'm wondering if the authors are trying to establish a "tone" for the series.

Also, it seemed like it took a while for the storyline to get going.  The archaeology doesn’t start until page 143, and the first small bit of gold isn’t found until several pages after that.  But perhaps this is inevitable when starting a new series.  Characters need to introduced, their backstories need to be recounted, and settings need to be described.  But in any event, after the first gold coin is found, everything picks up nicely.

I also would’ve appreciated a “what’s real and what’s fiction” section at the end of the book.  There is a short “Note To The Reader” section included, but in a nutshell, it says some of this is true, some of this is made-up, go look it up yourself.  Which I did.

Overall, I think Old Bones is a solid start to new series by these two writers.  It won't outshine their Agent Pendergast series, but it's better than their Gideon Crew tales.  If you can make it through the first 150 pages of requisite world-building, you'll find the rest of the story to be of vintage Preston & Child quality.

7½ Stars.  If you’re not familiar with it, the “Donner history” is given in chapter 4.  I was surprised to learn that there were quite a few survivors.  The Wikipedia article (the link is here) says 48 out of 87 lived through it.  So while some cannibalism certainly occurred, it never got down to a “just the two of us left, and one of us needs to eat the other” dilemma.  Too bad.  That might have made for a fascinating story.
Posted by Hamilcar Barca at 3:07 PM