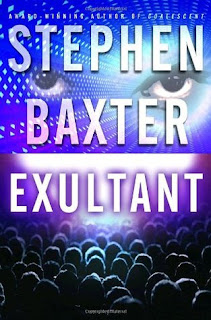 They captured a Xeelee nightfighter!  No one ever accomplished that before, and these two pilots – Dans and Pirius – somehow came up with a brand-new strategy that netted them an enemy starship.

What's more, the tactic used FTL (“faster than light”) technology, so it dumped them back in time two years, which means the human military forces have a bunch more time to study the nightfighter and figure out how to finally outmaneuver them in battle.  That’s never been done before either.

Sadly, Dans gave her life in the fight, so it’s only Pirius and his flight crew (a navigator and an engineer) that returned home.  Still, I'm sure they will be properly rewarded for their amazing exploit.

They were.  All three were tried in court, found guilty, stripped of their ranks, and banished to the vilest prison in the universe.  Their crime was unforgiveable – disobeying a direct order.  They’d been told to launch a suicide attack, instead, they turned, fled, and somehow ended up capturing their Xeelee pursuer.

To boot, Pirius’s “two-year younger self” (going back in time will cause these sort of temporal paradoxes) is also put on trial, for complicity, and found guilty.  After all, it’s obvious that the seeds of disobedience were already there, and we can’t allow some "future order disobeyer" to remain free.

What’s To Like...
Exultant is set 20,000 years in the future, and opens on the fringe of the gigantic black hole at the center of the Milky Way.  Mankind has marched its way across the galaxy, conquering all in its path, but now faces its greatest threat, the Xeelee, who have three distinct advantages over us:  a.) their star ships are better than ours, b.) they’re smarter than us, and c.) they have the power of “foreknowledge”, meaning they know what we are going to do even before we think of it.

The book is an ambitious attempt at “hard science fiction”.  Stephen Baxter builds a universe as realistic as possible, imagining technology that’s 20 millennia ahead of our time.  Huge advancements have been made in Quantum Mechanics, including FTL spaceflight and time-hopping, and I liked that, unlike most other sci-fi writers who eschew time paradoxes, Stephen Baxter revels in them.

I was intrigued by the core philosophy he proposes.  Mankind’s existence is at stake, and therefore adopts a “hive colony mentality”.  Innovation is deemed a crime, everyone is assigned a role in the hive, and you are expected to willingly give your life to preserve it.  That’s why Pirius’s decision to flee, instead of complying with the order to sacrifice his starship, results in such a draconian punishment.  Concepts like love and family are taboo; the hive has no place for anything that might interfere with one’s total submission and loyalty to it.

It’s fun to watch how both Piriuses (Baxter labels them “Blue” and “Red” for the sake of clarity) learn to coexist with their “other self”, including how to accommodate their bunkhouse “squeeze” Torec, who sleeps with "both of him".  There are critters aplenty, both on the microscopic and macroscopic scales.  Books are considered ancient artifacts, and described as “blocks of paper you hold in your hand”, and there’s even a small nod to synesthesia (a “green scent”).  And for those who like their sci-fi laced with quantum physics and cosmological stuff, there's lots of time-travel, time paradoxes, black holes, and dark matter in the story, plus an extended visit to Pluto and the Kuiper Belt.

The ending is both twisty and exciting.  For the moment, the day is saved for the good guys, although some of them perish in the ultimate battle.  The bad guys are pushed away, but not defeated, and no one doubts for one minute that they will return with a vengeance.  Which, one presumes, will take place in the book’s sequel

Excerpts...
To the Xeelee, humans were vermin – and they had a right to think so, for they were superior to humans in every way that could be measured.  And so, only if each human were prepared to spend her life without question for the common good would humanity as a whole prevail.  This was the Doctrinal thinking taught in seminaries and cadre groups and academies across the Galaxy: if humans must be vermin, humans would fight like vermin, and die like vermin.  (loc. 319)

“Perhaps I’m existing in somebody else’s memories, or dreams.  Perhaps Pirius Blue dreamed of Earth before he died, and everything I think is happening to me is happening inside his mind, in the last fraction of a second before the starbreaker hits –“
“And maybe you’ve got your pointy head so far up your own ass it’s coming out the other end.”  She punched his kidney, hard enough to make him yelp.  “Is that real enough for you?”  (loc. 5867)

Kindle Details…
Exultant sells for $8.99 at Amazon.  Books One and Three in the series go for $6.99 (Coalescent) and $7.99 (Transcendent).  ANAICT, Book 4, Resplendent, isn’t available at Amazon as an e-book, which is odd, and it looks to be a compilation of novellas set in the Xeelee universe.  Stephen Baxter has a slew of other sci-fi books, ranging from $2.99 to $10.99, including a number of collaborations with other prominent science-fiction authors.

In the quietest hours of the night, when the rats sang, you could still hear weeping.  (loc. 3756 )
There's a fair amount of cussing in Exultant, although I wouldn’t call it excessive.  Most of them are familiar terms, but I also liked the made-up ones, such as “Lethe!” and “My eyes!”

In the last/third section of the book, the chapters flip-flop between our macro-sized universe and a microscopic one, where a host of strange creatures – monads, quagmites, etc. – reside.  This felt clunky to me, although I wouldn’t be surprised if it impacts the events in the next book.

Finally, while there’s no doubt that the quantum physics concepts that the author proposes are deeply-researched and logically intriguing, the frequency with which everything grinds to a halt while they are explained slows down the pacing noticeably.  Thankfully, this habit is discarded for the ultimate battle, which makes for a great ending.

But fear not, Stephen Baxter’s writing skills more than make up for these quibbles.  The character-development is superb, and I found his technological predictions for a time 20,000 years to be absolutely fascinating.  And hey, it’s great to see a sci-fi writer who has no fear of temporal paradoxes.

7½ Stars.  The Destiny’s Children series is a subset of Stephen Baxter’s “Xeelee Sequence” series, which, per Wikipedia, totals 9 novels and 53 short pieces.  The only other book in this series that I’ve read is Book One, Coalescent, and I don’t think it's necessary to read it before this one.  Ditto for any of the other Xeelee novels; I was unfamiliar with them, but quickly grasped their role via-a-vis us humans.
Posted by Hamilcar Barca at 3:35 PM