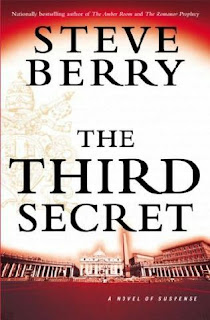 Overall Rating : B.
.
If you liked Dan Brown's Angels and Demons, you'll like The Third Secret. There's Vatican intrigue and nasty skullduggery as Cardinals wallow in politics to increase their odds of being the next Pope.
.
What's To Like...
Berry has throroughly researched several Marian Apparitions and Catholic Prophecies; and weaves them skillfully into the plot. He concentrates on three of them : The Malachy "Prophecies of the Popes"; the Three Secrets of Fatima, and the Ten Secrets of Medugorje. The Fatima secrets are by far the most famous, and the "uber-secret" Third Secret of Fatima provides the title to this book.
.
Amazingly, Berry manages to combine these three prophetic events into one coherent message, without compromising their historical background. All three are in fact non-fiction events, and can be found at Wikipedia.
.
I also like the "even treatment" Berry gives God and the Church. Most authors choose one side or the other. Either their book finds nothing good to say at all about Christianity, or else its a thinly-veiled call for you to get right with God. Berry's posture falls halfway between "Heaven and Hell", so to speak.
.
What's Not To Like...
If you're a loyal Catholic, you're not going to like this any more than you liked the Da Vinci Code and Angels and Demons.
.
Also, you go through almost the entire book waiting for The Third Secret to be revealed, and when it finally does... well... it's quite the anticlimax. In fairness, it has to be said that the Vatican's official version of The Third Secret is just as much of a letdown, fueling speculation that they gave us a red herring.
.
Finally, the protagonist is just too "pure evil" to be believable. I have no doubt that getting elected Pope is all about politics and nothing about seeking God's guidance, but the depths of the misdeeds here come off as too contrived.
.
Mail Hairy, Gruel of Face...
The Third Secret is not gonna bump Jurassic Park and The Da Vinci Code from the pinnacle of Cri-Fi. But it's a good read, about interesting subjects, and the Mary-sightings and Papal Prophecies are well-researched.
.
So we'll give it a solid "B", and refer you over to Wikipedia for some good readings on the "real" Fatima, Medugorje, and Malachy topics. The Vatican's stance on these sorts of things is surprisingly tepid.
.
It should be noted that the Malachy Papal Prophecies, which in theory give visions of the (at the time) next 112 Popes have now reached #111. Which makes you wonder if there's an implied "end of the world" or "end of an era" coming just around the corner. Berry weaves this nicely into the book, but the historical prophecies are almost more captivating.
Posted by Hamilcar Barca at 6:57 PM No comments: 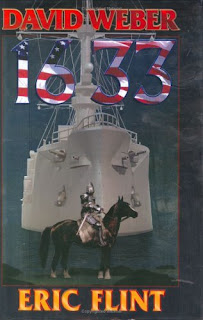 Overall Rating : B+.
.
The sequel to 1632. David Weber was apparently brought in to add a "big name" to the series. Which is kind of a waste, since I've never heard of him.
.
In 1633, our intrepid band of modern-day hillbillies have stopped slaughtering 17th century armies, and now are trying their hands at diplomacy & politics. There's not as much action as in 1632, but it's an interesting read neverthless.
.
What's To Like...
Again, the meticulous historical researching shows through. The historical figures of Oliver Cromwell, King Charles of England, Thomas Wentworth, Don Oquendo, and (Swedish) Princess Kristina are all introduced. Cardinal Richelieu is fleshed out, and if he can't be loved as the Ultimate Evil, he can at least be admired for his deadly charm and intelligence.
.
The French, British, Spaniards and Danes become the bad guys. The hillbillies, Swedes, Dutch and German peasants are the good guys. And unlike in 1632, some of the good guys actually die. albeit in a most heroic fashion.
.
The bad guys even manage some military victories, something sadly lacking in 1632. I have the impression that Weber's hand is to thank for the "evening-out" of characters, events, luck, victories, etc.
.
What's Not To Like...
Mike Stearns is still the consummate Ubermann. If he was the paragon of military perfection in 1632, here he makes 17th Century politics seem like childsplay. He may have to admit that Admiral Simpson now has some redeeming qualities, but Admiral Simpson has to admit that Stearns is perfect in everything he does.
.
More unsettling is the large number of "loose ends" here. Ollie Cromwell is introduced but is still imprisoned in the Tower of London at the end of the book. Amsterdam is under siege. The Danes are threatening to conquer Germany. Richelieu is conniving like crazy. One gets the feeling that Flint is going to pull a "Robert Jordan" - that is, resort to the never-ending sequel.
.
In conclusion...
It's still a very good Alternate History story. There are tedious parts (mostly when Flint gets to preaching his personal political philosophies), but David Weber supplies a much-needed counterbalance to Flint's sometimes too-shallow plot- and character-development. We can only hope that the loose ends don't go on for another 12 books or so.
Posted by Hamilcar Barca at 5:37 PM No comments: