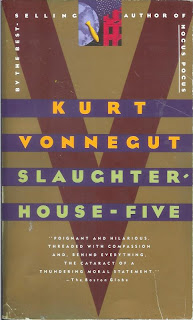 Overall Rating : A+.
.
Slaughterhouse-5 is arguably Kurt Vonnegut's most-famous novel. It explores a variety of great themes - free will; the absurdity of war; fatalism; and one of my pastimes - time travel.
.
Jason says I can call this a classic, since Vonnegut has now passed on. That's great, since "traditional" classical American Literature is the pits. We'll discuss that at a later date, probably when I review Thornton Wilder's The Bridge At San Luis Rey.
.
What's To Like...
It was an easy read. I devoured this book in three evenings. The main character, Billy Pilgrim, is a likeable, ordinary bloke. The aforementioned themes are dealt with extensively, but in such a way that you don't feel like Vonnegut is preaching at you. Indeed, it's hard to say just what the author's personal viewpoint is on fatalism and free will.
.
What's Not To Like...
The storyline jumps around a lot, time-wise. That's natural for a time-traveler, but it may take some getting used to if you've never read any Vonnegut before; and haven't come unstuck in time.
.
Characters from previous Vonnegut novels (Kilgore Trout, Eliot Rosewater) come into the story with little or no introduction. This is one of Vonnegut's recurring literary devices, and it drove me nuts some years ago when I trudged through his book on evolution, "Galapagos".
.
Listen : Billy Pilgrim has come unstuck in time...
It should be noted that Slaughterhouse-Five consistently makes the yearly 100 most-challenged books by the self-righteous "let's keep our kids brainwashed" crowd. Ostensibly, this is because there are some cuss words in the book, and because God is not given sufficient reverence by Vonnegut. In reality, I think they fear the anti-war (and Dresden bombing) message in S-5. Vonnegut is qualified to write on this - he was being held as a POW in Dresden on the night the Allies decided to fire-bomb the city just for the heck of it. The consequence of our nastiness (there were no military targets in Dresden) was that 20,000-100,000 innocent civilians perished.
.
Of course, the book-banning fundies have never wavered in their drive to tell others what to read, watch, and think. At present, Philip Pullman's The Golden Compass (both the movie and the book) is the target of their wrath. It is claimed TGC will turn any reader/movie-goer into a Satanist. Of course, everyone who read/watched any of the Harry Potter series is already a witch. I wonder which is worse. I guess I'll find out, since I've just started to read TGC.
.
But I digress. Slaughterhouse-Five is a fantastic book by a great American author. Read it today, just to tweak the book-burners. Then give it to one of your ditto-head friends as a Christmas present, and start to de-program him as well. It is worthy of an A+ rating. Poo-tee-weet!
Posted by Hamilcar Barca at 6:11 PM No comments: 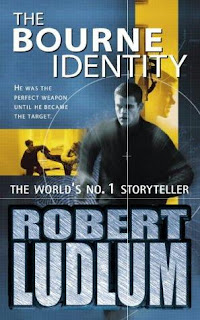 Overall Rating : A-.
.
Thanks to the Matt Damon movie, The Bourne Identity is undoubtedly Robert Ludlum's best-known novel. A bullet-riddled-yet-still-alive guy gets plucked out of the briny and discovers he's got a bad case of amnesia. He spends the rest of the book/movie trying to regain his memory; dodging bullets from (and then killing) a slew of professional assassins; and attempting to figure who is so all-fired anxious to kill him.
.
What's To Like...
The book is radically different from the movie, so there's a totally new plot and ending. In fact, the only similarities between the two are :
.1.) Our hero has amnesia.
2.) The heroine pulls a "Patty Hearst", gradually morphing from unwilling kidnappee to active GF and confederate of Jason Bourne.
3.) There is an outfit called Treadstone.
.
The plot is complex; the action is non-stop; and the book is a page-turner. There is both a good climax and a "door" left open for a sequel or two.
.
What's Not To Like...
I'm still nonplussed about the amazing foresight of Jason Bourne to have the number of his Swiss bank account implanted in his hip. Sheesh, how convenient.
.
The Treadstone in the book (which is very different from the movie's version) seems to be suicidally lax in security when it comes to high-level meetings.
.
Lots of other people b*tched about the movie being so different from the book, and this is probably valid if you read the book first. I didn't, so this isn't an issue for me.
.
Sequel, Threequel, Fourquel, Fivequel...
Ludlum of course mapped this out to be a trilogy, so one should expect some huge loose ends at the conclusion of Bourne-1. In addition to the Bourne Supremacy and Bourne Ultimatum, a guy named Eric van Lustbader has penned another two books in the series (after Ludlum was so rude as to die), titled The Bourne Legacy and The Bourne Betrayal.
.
So if you can't get enough of the saga, there's a couple thousands pages-worth of sequels out there. I'll take it one book at a time. Bourne-1 was a great read. We'll see if Bourne-2 can keep up the pace.
Posted by Hamilcar Barca at 1:17 PM No comments: