Harry Potter and the Goblet of Fire - J.K. Rowling 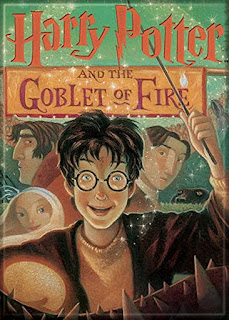 It’s going to be a great year at Hogwarts this year; Harry just knows it.  Even the summer break at the Dursleys hasn't been as bad as in previous years, now that they’re scared of what Sirius, Harry’s wizard godfather, might do to them if they torment Harry.

First up will be to attend the Quidditch World Cup, and that’s something that Harry’s done before.  This year it’s Ireland versus Bulgaria in the final, and that’s a great match-up.  Overall, Ireland’s the better team, but Bulgaria has the best player around – a young superstar named Krum.  It’s hard to predict which team is the favorite.

Then later in the school year, there’s some sort of top-secret competition that hasn’t happened for several hundred years.  Whatever it is, it involves Hogwarts and two other European schools of magic.  How awesome is that?!  Maybe Harry can swap spells with "foreign" students.

But beyond all this excitement, there's still one thing that troubles Harry.

Why is the lightning-shaped scar on his forehead burning like someone is pressing a hot wire into his skin?

What’s To Like...
With Harry Potter and the Goblet of Fire the series hits new levels of intensity   There’s a cold-blooded murder at the beginning, another one near the end, and the overall tone is markedly darker than the previous three books.  The forces of evil are focused and gaining power, and the forces of good seem to be doing the exact opposite.

But that just means the storyline is packed with action, with mysteries galore for Harry and his friends to try to solve, two tournaments to provide lots of excitement, and no slow spots to bog down the pacing.  There are a slew of characters to keep track of, more-or-less evenly split between new and recurring ones.  I liked the introduction of other schools of magic.  It stands to reason that Hogwarts can’t be the only academy for wizards in the world, and it was interesting to see both the cooperation and the rivalry between the different institutions.

There are some neat new gadgets, such as portkeys and omnioculars to try out; and some dangerous new spells, such as the trio of unforgiveable ones: Imperius, Cruciatus, and Avada Kedavra.  That last one should be used with extreme caution, but the Apparating/Disapparating spell is worth learning.  Critters abound: gnomes, witches, house elves, veela (huh?), leprechauns, goblins, blast-ended skrewts (what?), dragons (four different types), unicorns, grindylows, nifflers, and even a sphinx with her very own riddle for Harry to solve.

There's lots of witty dialogue to lighten things up, and a couple of J.K. Rowling’s hilarious puns, such as the "Pensieve" in chapter 30.  The mangled French made me chuckle (“bong-sewer!), and I could relate to Harry’s dread of having to learn to dance.  J.K. Rowling subtly sprinkles some serious themes throughout all the fun and mayhem, such as equal rights (for elves), bigotry (against giants and “half-breeds”), and trust.  I liked the fact that throughout all the mayhem, Dumbledore still has complete trust in Snape.

The ending is fantastic, including several twists plus the obligatory Harry-vs.-Voldemort showdown, which will keep even adult readers on the edge of their seats.  Evil emerges more powerful than ever before, and good will need to overcome their differences and prejudices and draw upon all their resources to even have a chance of thwarting Voldemort.

Kewlest New Word ...
Having him on (v., phrase) : persuading someone that something is true when it is not, usually as a joke.

Excerpts...
A thousand years or more ago,
When I was newly sewn,
There lived four wizards of renown,
Whose names are still well known:
Bold Gryffindor, from wild moor,
Fair Ravenclaw, from glen,
Sweet Hufflepuff, from valley broad,
Shrewd Slytherin, from fen.  (pg. 176)

“Excuse me?”
“Well – you know,” said Ron shrugging.  “I’d rather go alone than with – with Eloise Midgen, say.”
“Her acne’s loads better lately – and she’s really nice!”
“Her nose is off-center,” said Ron.
“Oh I see,” Hermione said, bristling.  “So basically, you’re going to take the best-looking girl who’ll have you, even if she’s completely horrible?”
“Er – yeah, that sounds about right,” said Ron.  (pg. 394)

“A troll, a hag, and a leprechaun … all go into a bar.”  (pg. 186 )
Harry Potter and the Goblet of Fire won a Hugo Award, so it isn't surprising that there's not much to quibble about.  Cussing-wise, I counted two “damns” and one “hell”, which seems acceptably tame for a YA novel.

The book is written in what I’ll call “Americanized British”.  The spelling and punctuation have been tweaked for us Yanks, but we still have to figure out words like swotty, manky, nutter, and kip, which I always enjoy.

Finally, one might call the storyline formulaic.  We start with the usual drudgery at the Dursleys, tag along with Harry as he commutes to Hogwarts, attend his new classes, sit through a quidditch game, and cringe as he locks horns with Voldemort.  Is this how things went in the previous book? Yes.  Does it work just as well here?  Yes!

I’m impressed with any YA series that can keep the interest of both teens and adults, and all the Harry Potter books thus far have done just that.  This one is fully deserving of winning the Hugo Award.  The only caveat is that you really should read these books in order.

9 Stars.  I did have one question after finishing Harry Potter and the Goblet of Fire, and I’ll try to make this spoiler-free.  In Chapter 33, a number of characters are revealed to be Death Eaters, including several Hogwarts residents.  Their names are later revealed to Dumbledore, yet no measures are taken to remove these minions of Voldemort.  Some of them even show up later to hassle Harry.  Is this a plot hole, or did I miss something?
Posted by Hamilcar Barca at 11:25 AM