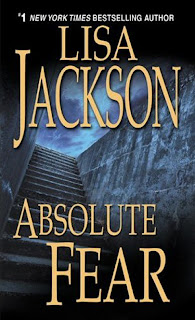 Overall Rating : C.
.
A serial killer roams Louisiana, killing men, women, and a few old nuns in ritualistic fashion. Eve Renner gets stalked and shot, and has to deal with the possibility that her jealous beau could be the shooter/stalker.
.
What's To Like...
The story starts out fast, and continues for 500 pages that way. There's lots of mysterious clues to reason out, and someone gets offed every hundred pages or so to keep you from getting too relaxed. I guarantee you won't figure out who's the Ultimate Evil until the end.
.
What's Not To Like...
The heroine obviously has a death-wish. There's a psychopathic killer stalking her, and she just can't think of enough reasons to go off to places by herself.
.
Everyone is amazingly dense here. The killer tattoos 3-digit numbers onto his victims, and no one can figure out what they mean. Hey, it took me two pages to deduce that one.
.
Finally, there's a slew of unresolved loose-ends left lying about at the end, and one doesn't get the feeling they're there in order to carry over into the sequel. For instance, once our intrepid heroes figure out what the 3-digit numbers stand for, you're still left with a giant "so what?". Are these clever MacGuffins, or just sloppy writing?
.
And if you don't know what a MacGuffin is, click here.
.
Wait! It's not Murder-Thriller! It's...
Think about where you found this book. Were there Nora Roberts and Danielle Steele books on either side? Maybe that should be telling you something.
.
Yes, folks. There may be blood, gore, moral outrage, death, and nunocide in this book, but at its core - it's Chick Fic. True love oozes from page to page, and threatens to overshadow the murder-mystery. I guess that's okay if you happen to be a chick, but male readers are hereby forewarned.
.
To sum up, Absolute Fear is overall an average novel. The unforeseen twists and action-packed chapters are offset by the IQ-challenged characters and the loose ends and McGuffins. We'll give it a C, keeping in mind that if you like Romantic Thrillers, you might rate this a lot higher.
Posted by Hamilcar Barca at 5:29 PM No comments:

A River Runs Through It - Norman Maclean 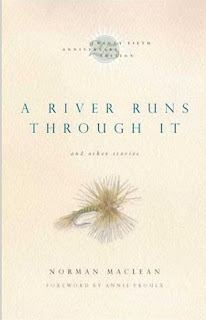 Overall Rating : C-.
.
73-year old Norman Maclean's debut novella was an instant hit. A semi-autobiographical (I love that term. It means, "I'm gonna write about my life, but I get to lie at times.") story about the family relationships, primarily between Norman, his dad and his younger brother. The setting is ...erm... fly-fishing. Pure and simple.
.
Being only 104 pages long, ARRTI is bundled with two other Maclean stories - one about a summer he spent in a logging camp; the other about a year he worked for the US Forest Service.
.
What's To Like...
Maclean has a nice, poetic style. If you like your storylines heavy on the drama and light on the action, you'll love ARRTI. I don't think anyone before Maclean ever thought to use fly-fishing as a metaphor for life.
.
Personally, I liked the two "add on" stories better. They have a bit more plot, a bit more action, and best of all, give a glimpse into what being a logger and a ranger was like 90 years ago. Daily life was a lot different then, and it's enlightening to get insight into it. In that respect, it reminded me a lot of Isaac's Storm, which was reviewed here.
.
What's Not To Like...
Did I mention it's light on action?
.
In truth, ARRTI is devoid of action.Plot-wise (PWP), little brother is self-destructive, and the 30-something author can't figure out how to help him. He asks his Dad, he of zero parenting skills, who also has nothing to offer. A lazy bum of a brother-in-law shows up, who at least puts the "fun" back into "dysfunctional" by boinking the town whore and drinking everybody's beer. The Maclean women's sole activity is nagging the Maclean men.
.
All-in-all, pretty uninspiring stuff. Alternatively, those who loved ARRTI call the book "dark". Oh, the book was made into a movie, starring Robert Redford, and my carpool partner (who has excellent movie tastes) says it's a yawner too.
.
Eventually, all things merge into one, and a river runs through it...
Judging from other reviews, I am in the minority when it comes to ARRTI. They gush about the poetry, the philosophy, the metaphysics, and the key to life, the universe, and everything else. Here's one example :
.
(ARRTI is) "detailed descriptions of fly-fishing and nature to engage with a number of profound metaphysical questions". Whoa! Way deep, huh?
.
El toro poo-poo. Maclean wrote about fly-fishing cuz it's one of the few things he knew something about. Anything can be hyped into being a metaphor for life. For instance, here's a quote from yesterday at MSNBC.com, coinciding with the advent of the baseball season :
.
"Bart Giamatti, the former commisioner of baseball, wrote eloquently about that journey that begins with the batter standing at home, trying first to leave it and then to get back - to be safe once again at home. For him, it was a grand metaphor of life, this circuituous journey that could be fraught with danger and obstacles, that could demand daring and bravery to complete."
.
Wow! More way deep stuff, eh? IMHO, they're both ridiculous, unless you happen to be a baseball or fly-fishing fanatic.
.
But I digress. For me ARRTI was a ploddingly slow read, lacking any plot and action, and saved only by the two add-on tales. I must admit it's well-written; now if Maclean could only have thought of some sort of storyline to drape his flowery philosophy around. If you want to see this sort of genre done much better, try The Thin Place, by Kathryn Davis, which we'll review in the near future.
Posted by Hamilcar Barca at 7:14 PM No comments: