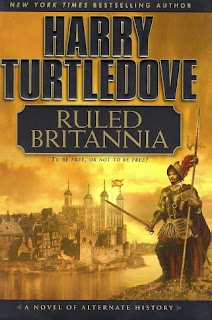 Overall Rating : B.
.
It's 1597. England seethes under a long Spanish occupation, following the success of the Spanish Armada in 1588. Queen Elizabeth is in the Tower of London. The state religion is once again Roman Catholic. The Inquisition is rooting out all Protestant die-hards and other heretics.
.
Will Shakespeare couldn't care less. All he wants to do is write and stage plays, and get paid for them. But karmic forces are in motion. The English insurgents hire him to write a nationalistic play ("Boudicca"), while the Spanish oppressors hire him to write a eulogistic drama to memorialize their dying monarch (Philip V). The tension mounts as Will reluctantly finds himself forced to play both ends against the middle, but becoming unexpectedly wealthy as he does.
.
What's To Like...
Shakespearophiles will love this book. Turtledove cribs freely from various plays of the the Bard himself, as well as some bits of Christopher Marlowe's Tamburlaine. The result is a fine piece of drama that will appeal to even those of us who weren't thrilled about having to read one of Shakespeare's plays every cotton-pickin' year in High School.
.
The author serves up a delightful cast of characters. There's the witty and punning Wil Kemp who will keep you groaning & chuckling. His counterfoil is the bombastic fellow-actor Richard Burbage. There's the Mitonesque detective Constable Strawberry, who can take a simple statement and embellish until not even the Queen herself can make out what he just said. And the lovable-but-lazy manservant Diego, employed by the womanizing Spanish soldier and wannabee-writer, Lope de Vega. And finally, at center-stage throughout, we have the but-I-never-wanted-to-be-a-hero Will Shakespeare.
.
What's Not To Like...
Did I mention it's a drama? Therefore, don't expect much action. The book starts promisingly, with a pleasant public burning-at-the-stake, but that's pretty much it for blood-spilling until around page 500. (Yawn)
.
Turtledove takes great pains to immerse you in 1590's England. But that includes that dreadful renaissance English that made reading The Merchant of Venice such a royal PITA. You will find yourself getting tired of being repeatedly subjected to words like fain, liefer, gramercy, certes, 'swounds, bethinks, belikes, and a whole slew of other verbs prefixed by that annoying "be-". Forsooth, it besucks.
.
Finally, if you're English and Protestant, you will probably find this to be an uplifting tale. But if you're Spanish and Catholic, you may take umbrage at the stereotyping of all the occupiers as being either stupid or evil.
.
To Be Free, or Not To Be Free...
Plotwise, the story ambles to a predictable conclusion. Spoiler Alert : The oppressors are ousted, the Queen is freed, and like Robert Asprin's Skeeve, Turtledove's Shakespeare somehow bumbles his way into becoming a hero.
.
Yet there is a subtle undertone to the story. In the end, as Shakespeare wanders through London observing the joyous celebrations of long-awaited liberty, he also notes that the English citizenry are treating the unfortunate remaining Spanish (and anyone perceived - justly or unjustly - as being a collaborator) with just as much brutality as the Spanish had doled out for nine years. Even the likable Diego, who has never done any harm to the English, and who only wants to sleep his way through life, ends up dead-as-a-doornail, a casualty in the name of Freedom.
.
But I digress. As a drama, Ruled Britannia rates an "A". As an action novel (hey, Mr. Turtledove! You at least cooda included the Armada's successful campaign against England in the story), it only rates a "C". That averages out to a "B", so that's what we'll give it.
Posted by Hamilcar Barca at 12:43 PM No comments: 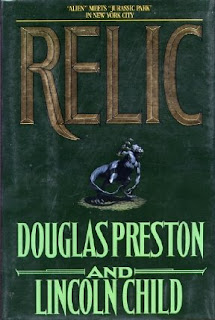 Overall Rating : B.
.
Something is slashing and gnashing people at the New York Museum of Natural History, and eating their brains. Is it human, animal, vegetable, monstrous, demonic, or alien? Whatever it is, Margo Green better find out quick cuz the museum wants to open a new exhibition in 4 days, and the Museum Management isn't about to let a few grisly slayings get in their way.
.
What's To Like...
This is a page-turner. It starts off fast; there are no slow spots; and you can finish it in a couple of days. There are a few twists to keep you on your toes.
.
The heroes aren't Mary Sues. (not sure what a Mary Sue is? See here). Indeed, the mayor of New York gets cast in a favorable light. When's the last time a politician got that treatment in a novel?
.
And the book actually comes to a conclusion! You don't have to read 10 sequels for everything to wrap up. Take that, Robert Jordan.
.
What's Not To Like...
Despite the twists, the story is somewhat predictable. The bad guys get chomped; the good guys live. The ending, although climactic, is also a let-down. Brain-Chomper gets his just desserts, but you don't get many details about his ultimate demise, and the Feds apparently snatch up the body before the authors can give you much of a description of the corpse.
.
Finally, you have to believe that life, and new exhibits, go on as always, despite employees and visitors getting mutilated and disembrained.
.
Oh Cri-Fi! Thy name is Crichton!
The teaser on the cover says it all : "Alien meets Jurassic Park". But as Cri-Fi, Relic just doesn't quite measure up to JP. Oh, there are some computer-generated read-outs, but one doesn't get the feeling that the authors made a lot of technical effort to make this scientifically believable. (*)
.
Still, it is a decent book, so we'll give it a B, and see if we can find its sequel, Reliquary, at the used-bookstore.
.
(*) : There's one glaring loose end to this story. A plane carrying most of the Amazonian expedition crashes early in the timeline, giving rise to the theory that a "Curse" is involved. But it becomes evident later on that Brain-Chomper wasn't on that plane. So why did it crash? Inquiring nit-pickers want to know.
Posted by Hamilcar Barca at 5:46 PM No comments: