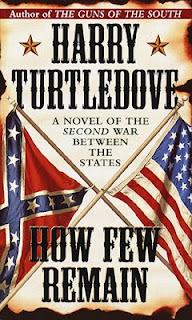 Overall Rating : C+.
.
Harry Turtledove is a prolific author of Science Fiction and Alternate History books. This was my first Turtledove book.
.
HFR is "pure" Alt-History in the sense that the timeline doesn't change due to some inscrutable cosmic event. Instead, McClellan's army doesn't intercept Lee's battle plans after Antietam. With the US army kept in the dark, Lee is victorious in the battlefield; England and France recognize the new nation; and the Confederate States of America gains independence. HFR is set in 1881, when the "second war of independence" erupts between the North and the South.
.
What's To Like...
The book is a great "What-If" novel. Turtledove weaves a detailed alternate timeline by following a number of historical figures. Abraham Lincoln is doing the speech-giving circuit and contemplating becoming a socialist. Teddy Roosevelt is a bronco-bustin' cowboy in Montana. James Longstreet is the president of the CSA. Frederick Douglass is giving anti-slavery rallies. Samuel Clemens runs a newspaper in San Francisco and rails against the folly of war. George Custer, Jeb Stuart, Stonewall Jackson, and even Geronimo are followed.
.
Some of the good guys die. Some of the bad guys live. And, unlike many other works of fiction, you can't predict who lives/dies by the author's character development (or lack thereof).
.
What's Not To Like...
Well, if the character-development is superb, the plot-advancement is non-existent. Mexico sells the states of Sonora and Chihuahua to the CSA, which for some unfathomable reason p*sses off the USA to the point of going to war. So far, so cool.
.
Alas, the total events of the war consist of a few CSA minor victories in Arizona; some skirmishes between the US and Canadians/Brits in Montana, a British naval raid on San Francisco, and the USA for some reason trying to take (of all places) Louisville, Kentucky. That's it. Failing in those endeavors, the USA calls off the war. Talk about a lack of resolve.
.
Turtledove tells the story from a pro-CSA POV, so the issue of slavery in the South is downplayed, almost to being ignored. James Blaine, the US President, is given short shrift. It would've been nice to understand the workings inside his head as to why he decided to quickly go to war, then just as quickly opted out.
.
Oh yeah, and the couple of sex scenes are incredibly lame and completely pointless. Were they put in there to titillate teenage male readers? If so, it failed miserably.
.
Why I've Been A Lifelong Alt-History Fanatic...
I read my first Alt-History book 45 years ago. It was titled "If The South Had Won The Civil War" (yep, same theme), and if you google that, you will find that it is by MacKinlay Kantor and was re-issued in the 1990's, and is still available from Amazon.
.
Looking back, it was a rather tepid attempt at Alt-Hist. The South wins; Texas secedes from the CSA; slavery again gets downplayed; and the three countries remain best-of-buddies for a hundred years. After a century of group-hugs and bonding, they all schedule a joint news conference, and it's strongly implied that Reunification will occur.
.
Okay, it was not a hard-hitting book. But I was in 5th or 6th grade at the time, and despite its lameness, I thoroughly enjoyed the "What If" scenario. That passion for Alternate History has stayed with me ever since. The genre is done much better nowadays, but I think it's fair to say that that's because science fiction & science fantasy as a whole are now being done so much better.
.
But I digress. Your opinion of How Few Remain will hinge on how important a plot is to you. For me, this was a fun read, and I enjoyed "getting to know" the various historical characters. But the story didn't go anywhere. The war came, the war went, and nothing really changed and/or progressed. I came away with the feeling that Turtledove only wrote this to set up the characters in his World War One Alternate-History series. The first book of that series (second if you count HFR) is on my "to be read" bookshelf, albeit, along with a dozen other "must-read" books. So eventually, I'll find out whether this tangential timeline takes off or fizzles out.
Posted by Hamilcar Barca at 5:18 PM No comments: