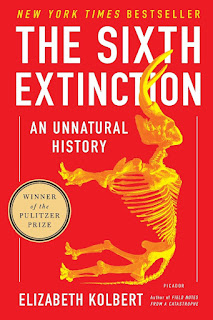 Over the course of history of life on Earth there have been five major extinction events.  Paleontologists have given them era-associating names – End-Ordovician, Late Devonian, End-Permian, Late Triassic, and the most recent one, the End-Cretaceous Extinction.

The kill-offs were caused by different things.  One was believed to be due to glaciation (caused by mosses, no less!), another due to global warming.  The evidence is pretty persuasive now that Extinction Number Five, the one that zapped all the dinosaurs, occurred when a large object, most likely an asteroid, slammed into the Yucatan peninsula.  But it wiped out a lot of other species too; almost anything that couldn’t fly or burrow into the ground perished.

It’s been a while, about 66 million years or so, since that happened, which begs the logical question – when will the next one hit?  Elizabeth Kolbert has a good-news/bad-news answer for this.

The good news is that you don’t really have to worry about figuring out when the next Extinction will hit.

The bad news is that’s because it has already begun.

What’s To Like...
The thirteen chapters of The Sixth Extinction are divided into two sections.  Chapters 1-4 give a quick history of the field of Paleontology and I was surprised to learn that it didn’t get started until the late 1700's, by a guy named Georges Cuvier, who concluded that some giant bones unearthed in Siberia belonged to animals (mastodons, as it turns out) that no longer existed.  The thought of plants and animals becoming extinct was revolutionary at that time.  Even Charles Darwin, who was comfortable with species adapting/changing/evolving to cope with new climatic conditions, didn’t accept that they might also sometimes completely die out.

Elizabeth Kolbert then uses Chapters 5-13 to present her central hypothesis: that the Sixth Extinction has already begun and its primary cause is the proliferation of Homo sapiens, with our incredible resourcefulness in crossing geographic obstacles (oceans, mountain ranges, etc.), inventing tools that enable us to be a threat to all other forms of life, and expanding to all corners of the globe (yes, that's an oxymoron), thereby becoming a convenient transport, sometimes unintentionally, for other plants and animals to invade new areas, which often resulted in them supplanting whatever fauna/flora was already there.

The chapters usually spotlight one particular plant or animal family to demonstrate a point.  The molar of a mastodon introduces the idea of “extinction”.  The great auk highlights the way humans have purposely killed off a number of animal species.  Coral reefs are threatened by both global warming and ocean acidification.  And the mass destruction of the Amazon rainforest may eventually kill off its main predator, humans.

There’s a bit of French in the book, something I always enjoy, and here thanks mostly to Cuvier.  A 1980's scientific experiment here in Arizona called Biosphere 2 gets a brief mention (sadly, it was a  failure).  Even the Belgian cartoon “Tintin” and the mysterious “Maastrict animal” (which the Netherlands has been waiting 200 years for the French to give back) are mentioned.  The book is shorter than it looks – thanks to 46 pages of “Extras” (Acknowledgements, Notes, Bibliography, Photo Credits, and Index) after only 271 pages of text, with .

Kewlest New Word ...
Lede (n.) : the opening sentence or paragraph of a news article, summarizing the most important aspects of the story.

Excerpts...
The bolide arrived from the southeast, traveling at a low angle relative to the earth, so that it came in not so much from above as from the side, like a plane losing altitude.  When it slammed into the Yucatan Peninsula, it was moving at something like forty-five thousand miles per hour, and, due to its trajectory, North America was particularly hard-hit.  A vast cloud of searing vapor and debris raced over the continent, expanding as it moved and incinerating anything in its path.  “Basically, if you were a triceratops in Alberta, you had about two minutes before you got vaporized” is how one geologist put it to me.  (pg. 86)

Archaic humans like Homo erectus “spread like many other mammals in the Old World,” Paabo told me.  “They never came to Madagascar, never to Australia.  Neither did Neanderthals.  It’s only fully modern humans who start this thing of venturing out in the ocean where you don’t see land.  Part of that is technology, of course; you have to have ships to do it.  But there is also, I like to think, or say, some madness there.  You know?  How many people must have sailed out and vanished on the Pacific before you found Easter Island?  I mean, it’s ridiculous.  And why do you do that?  Is it for the glory?  For immortality?  For curiosity?  And now we go to Mars.  We never stop.”  (pg. 251)

If 'Dicerorhinus sumatrensis" has a future, it’s owing to Roth and the handful of others like her who know how to perform an ultrasound with one arm up a rhino’s rectum.  (pg. 221 )
The Sixth Extinction won a Pulitzer Prize in 2015, so it’s not surprising that there's not much to quibble about.  You do run into the word “shit” a half-dozen times, mostly in the author quoting somebody.  Personally, I found the book to be a slow-but-easy read, mostly due to the technical nature of what Elizabeth Kolbert was presenting.  That’s fine by me since I’m a chemist by profession, and I like to read “sciency” stuff.  But if technical books turn you off, you might find this one a bit of a slog.

Overall, I think Elizabeth Kolbert presented a convincing case for her assertion that a massive die-off has already begun.  Yes, the book has a lot of technical details, it has to.  But the author includes enough non-technical anecdotes and insights so that even the average reader will  be both entertained and enlightened.  If nothing else, you’ll have a new appreciation for anyone having to run an ultrasound on a rhinoceros.

9 Stars.  Curiously, this was one of two books on my TBR shelf with identical titles, The Sixth Extinction.  The other one is a fiction thriller by James Rollins.  I suppose I ought to now read that one as well.
Posted by Hamilcar Barca at 3:19 PM