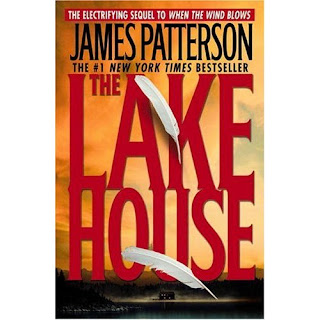 Overall Rating : D-.
.
This is the sequel to Patterson's 1998 book, When The Wind Blows, and is not to be confused with the film "The Lakehouse" (one word) with Sandra Bullock, which has absolutely no relationship to this book.
.
As in WTWB, six genetically-engineered "bird kids" get help from a (female) Colorado veterinarian and a (male) decommissioned FBI agent against an evil doctor intent on on turning them into lab rats.
.
What's To Like...
It's your typical James Patterson novel. Fast-reading, fast-moving, and the average length of a chapter is 3-4 pages. So if you're in the habit of reading before going to bed (like I am), you won't have to read very far when it's time to turn out the lights.
.
What's Not To Like...
Unfortunately, plenty. Like most readers, I thoroughly enjoy Patterson's "Alex Cross" detective series. But either he's burnt out on serial-killer thrillers, or else he thinks anyone can write a Cri-Fi novel.
.
Alas, he's no Michael Crichton. He takes no time to try to convince you of the scientific validity of the "genetic engineering" theme in these two books, so you never really feel like it could be real.
.
At least WTWB is moderately interesting. Alas, there's nothing new added by Patterson in the sequel. Same plot, same chase scenes, same type of bad guys (evil but bumbling), same ending. Except now, everything is more-sloppily done.
.
Dr. Nefarious has a lucrative "entire internal organ transplant" business going. He's rejuvenated 40 of the world's leaders, and is therefore both insanely rich and insanely powerful. Why he would want to jeopardize all this for 6 bird-kids is an unexplained mystery.
.
To boot, he's cloned himself. Four times, even. And apparently does a heap of Balco Barry steroids, cuz he's also incredibly strong. And he can tell your IQ just by looking at you when you're sleeping. But he's not too intelligent. After he (and his gang of clones, thugs and hired assassins) are out-smarted and out-fought several times by the bird-kids, including having one of his clone-selves eradicated, what does he do? Attempts to kill the chief bird-kid, all by himself, armed only with a scalpel. Go on now, guess who wins.
.
Nothing gets resolved at the end. The bird-kids kill one Evil-Doctor-Clone and one Rejuvenated-World-Leader; then the original Dr. Nefarious is killed at the very end. But you're never told what happens to the organ-tranplant rejuvenating business after that. Custody of the bird-kids is transferred from their natural parents (who want to retain custody) to the Vet and FBI-ex-agent, even though it's obvious from both books that this doesn't make them one bit safer. And the remaining three Evil Clones are left to do... well, whatever three now-leaderless clones do. Look for a fourth for a pinochle game, maybe?
.
And on, and on. A 7th-grader could do a better job of crafting a plot and tying up loose ends than Patterson does here.
.
When Border's Has A Book On Sale, It Means...
I found this book on sale at Borders Bookstore. Not on their regular bargain tables. Nope, TLH had its own table and was 30% off. That makes it a good deal, right?
.
Wrong. It's clear that based on Patterson's reputation, they bought tons of copies of this book, and the books weren't selling. Jimmy-Boy was pulling a fast one. My best guess is that he fooled the publishing company; the publishers then fooled the bookstores; and the bookstores then fooled the readers. I feel like Curly in The Three Stooges. Moe slaps Larry; Larry slaps Curly; and Curly discovers he has no one to slap.
.
But I digress. This is a stinker of a novel. When The Wind Blows is so-so, so if you want to see how Patterson fares at writing Cri-Fi, read it, and skip this sequel. And learn a lesson as to why Borders Bookstore gives books like this their own special sale.
Posted by Hamilcar Barca at 7:19 PM No comments:

Where Have All the Leaders Gone? - Lee Iacocca 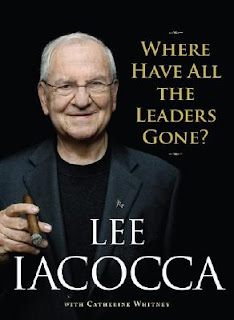 Overall Rating : B.
.A few months back, I received an e-mail titled "The Nine C's of Leadership". It basically slammed the daylights out of Dubnutz, and was purportedly written by none other than Lee Iacocca.
.
I was intrigued that one of our industrial giants might actually have the chutzpah to tell it like it is, but also little leery because of all the right-wing bullsh*t lies circulated by the repugnican chicken-hawks. So I went out on the Internet and found that this indeed was written by Iacocca, and was from his new book, Where Have All The Leaders Gone?
.
I'm not a big fan of celebrity-penned books (do we really want to hear Paris Hilton's philosophy of Life?), but went down to Borders and bought WHATLG anyway.
.
Oh, and I forwarded the 9-C's e-mail to all my ditto-head friends (you have a lot of these when you live in Arizona and work for a chemical manufacturing company), and waited for their rebuttals. But apparently Rush hasn't told them was to think about it yet, since I only got one response, and that in effect said that Lee should be more grateful since we bailed him out when he was the CEO of Chrysler. Talk about a tepid counter-point.
.
What's To Like...
The Nine C's of Leadership segment is eloquently written. In fact, the first third of WHATLG is all about politics, and the Chimperor and his lackeys fare very poorly. Talk about some wonderful chapters!
.
Lee Iacocca wrote the whole book in a "chit-chat" style, making it very easy to read. And he covers every topic you can think of - the environment, the auto industry, rising gas prices, outsourcing, medical research, running for office, etc. So if it's in the headlines today, chances are Lee has, and gives, an opinion.
.
What's Not To Like...
While Lee's take on politics is great, when he gets to discussing the auto industry (which is obviously near and dear to his heart), I was "able to put the book down".
.
He covers a slew of topics, but a lot of them are done with a cursory approach. Can you really solve the issue of "How To Deal With Rising Gas Prices" in a mere five pages?
.
There's also s lot of name-dropping in here. Wanna know what advice Lee gave the Pope? Do you really think the Pope was impressed?
.
If You Can Find A Better Book, Buy It...
Bottom line - it's a good book. You may or may not get tired of Lee's "chit-chat" style. And while you might have to plod through a couple of topics that you frankly don't care about, most of them are of high-interest.
.
There was one issue that really stuck with me - medical research. Lee's first wife died of diabetes, and he is determined to find a cure. To that end, he started a diabetes research foundation. What he discovered about MedRes is that no one is really interested in finding a cure. What's important is to get government grants year after year. So if/when your foundation actually happens upon a breakthrough (as was the case with Iacocca's group), the rest of the researchers in that field will not be happy. In fact, they'll be downright hostile.
.
What's the worst thing that can happen to, say, the American Cancer Society? You got it - finding a cure for cancer. Such an event would not only end their reason for existence, but also end their goverment $$$. I had this pointed out many years ago. About once a year, ACS will make an "exciting" announcement. New wonder drug - (insert random chemical compound here) - shows promise in curing some types of cancer in mice!! More tests are needed to see if it works on humans!!!
.
And then, that's about all you ever hear about it. Coincidentally, they make this announcement right about the time they have to apply for more grant-money from the government. Twelve months later, they make a new "exciting" announcement, touting a new wonder-chemical. Nothing is said about last year's exciting discovery.
.
Now that I've let you in on this, watch for the next "exciting announcement" from the ACS, and then sit back and be amazed how this scam plays out every year.
.
But I digress. Where Have All The Leaders Gone? is a good read. Give it as a Christmas present to all your ditto-head friends.
Posted by Hamilcar Barca at 7:06 PM No comments: