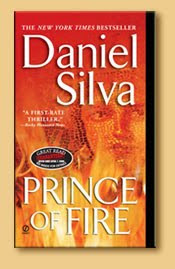 Overall Rating : D-.
.
The bombing of the Israeli embassy in Rome puts Gabriel Allon, a reluctant operative for Tel Aviv, on the trail of an Arab terrorist. The path leads all over Europe and the Middle East.
.
What's To Like...
It's easy to tell the good guys from the bad guys. No gray areas here. The Arabs are evil killers; the Jews are noble killers. At 376 pages, this is a fast read.
.
What's Not To Like...
The plot is hopelessly disjointed. The evil Arabs blow up the Israeli embassy in Rome. Somehow this leads to a raid in Milan, where a computer disc is found. Italian intelligence can't decode it, so they decide, "what the heck, let's give it to the Israelis". The Israelis magically decode it, and discover it lists, among other things, the personnel file of Gabriel Allon. Which somehow ties into the bombing. Allon assembles a think-tank team, and somehow they decide that the Ultimate Evil is an Arab named Khaled al-Khalifa. Meanwhile, the UE kidnaps Allon's vegetative wife in England, and instead of just killing her, has her smuggled into Paris so she can be blown up at a later date.
.
Confused? Don't worry. The obviousness of the plot and the simplistic black-&-white characters (Arabs = bad; Israelis = good) will put you to sleep long before you feel any urge to try to make sense of anything.
.
Born Under A Bad Zion...
The only way to comprehend this travesty is to recognize that it's merely a vehicle for the author to expound his Zionist viewpoint. This is really just a political diatribe with a sloppily-crafted plot thrown over it.
.
Silva seems to feel the Arabs are entirely to blame for the Middle East crisis. The millions of Palestinian refugees are to blame because they didn't take a better deal when it was offered way back in the 40's/50's. The various Arab governments are also to blame because they haven't expended vast amounts of money to assimilate these refugees into their own country.
.
Ultimately, Silva's philosophy can be summed up as, "the only good Arab is a dead Arab". Which is nice if you happen to be an Israeli, but not so nice if you're a Palestinian.
.
In real life, the Silva scenario is inane. If anyone is to blame for the Middle East crisis, it's Britain (who promised the same land to both the Palestinians and the Israelis), and the United Nations (who felt so guilty about the Holocaust, they mandated a new country where (unfortunately) millions of people already lived).
.
Jordan, Syria, and Lebanon are hardly wealthy nations. If anyone ought to throw large sums of money at the Palestinians, it's the UN. And the Palestinians can hardly be blamed for rejecting the earlier offer, since in essence it said they could keep a portion of Palestine provided they ceded a large part of it to Jewish immigrants. Is it surprising they turned down this deal?
.
But I digress. This is a wretched novel - both as a literary work and as a Arab-hating smear-job. If you're into blatant stereotyping - all Arabs are evil; all Chinese are brain-washed; all French are traitors; all Israelis are noble, etc. - then this book will appeal to you. Otherwise, don't waste your time.
Posted by Hamilcar Barca at 1:09 PM No comments: 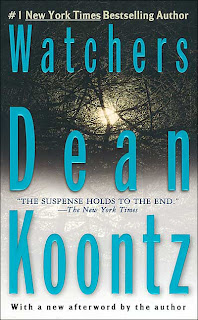 Overall Rating : A-.
.
Watchers is considered by most to be one of Koontz's better efforts. A depressed man comes across a remarkable Golden Retriever while hiking in the southern California wilds. The dog promptly saves the man from a menacing something, they bond, and thus begins a suspenseful book-long chase involving a monster, a psychotic hired hitman, and some duty-bound and therefore not-on-our-side NSA feds.
.
Oh yeah, there is a love-story too, but we'll ignore that as best we can.
.
What's To Like...
It's fast-paced. No 50 pages of introductory yawning here. By the time page 30 rolls around; you've already been introduced to the man, the woman, her erstwhile tormentor, the dog, the monster, and the hitman.
.
The central character - the high-IQ dog - is a joy to follow. What if one of our canine companions was as intelligent as us? The dichotomy (wow, I always wanted an excuse to use that word) of a human-like mind in a dog's body is a fascinating study.
.
Finally, ther are no slow spots. You'll find yourself staying up late to read more of Watchers.
.
What's Not To Like...
The characters are fairly shallow. The good guys are completely good; the bad guys are completely bad. The romance is straightforward. The central cri-fi theme - DNA manipulation - has been done by others, and in a better-researched manner.
.
The ending is hurried and tepid. After 450 pages of a great build-up, the evilnesses are disposed of with remarkable ease. You won't guess the ending, but that's simply cuz you'll be expecting more.
.
Finally, Koontz leaves so many loose ends that you'll be tempted to roll 'em up into a ball of yarn. The hitman murders - unresolved. The sabotaging of a top-secret government research project - unresolved. The reason that the book is titled "Watchers" - unresolved. The consequences of genetic manipulation - unresolved.
.
Genres? We've got genres coming out of our ears...
This book must be a librarian's nightmare when trying to think of where to file it. We could call it a Thriller, yet the monster's character is sadly under-developed. Indeed, his only purpose for most of the book is to do a random grisly killing about every 70 pages or so.
.
Or maybe we'll file it under Romance, although the love story is obvious and trite. The girl has head problems; the guy magically cures her with his love; and she never has any relapses again.
.
How 'bout Cri-Fi? Except that Koontz never really tries to make the science seem plausible. Maybe Mystery - but as mentioned before, half the killings are never resolved.
.
Perhaps the best fit would be to call it a Boy-And-His-Dog story, and put it next to Lassie. But I don't think little Timmy ever had to deal with monsters that liked to gouge out eyeballs and decapitate its victims; nor hitmen that fantsized about bludgeoning pregnant women.
.
But I digress. Watchers is a great read; yet I doubt I'll pick up any more Koontz novels. In his 3-page "Afterword", Koontz states, "I believe that we carry within us a divinely inspired moral imperative to love, and I explore that imperative in all my books". In other words, if you've read one Koontz story, you've read them all. I intend to stop at just one.
Posted by Hamilcar Barca at 12:59 PM No comments:

Against the Tide of Years - S.M. Stirling 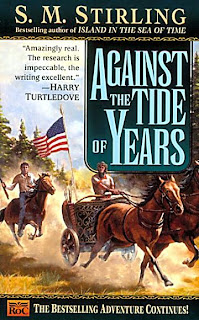 Overall Rating : B+.
.
ATTOY is the second part of Stirling's "Nantucket" trilogy, where that island gets zapped from present-day back to the 1250 B.C. Bronze Age. Volume One (Island In The Sea Of Time) was previously reviewed. ATTOY takes place 8-10 years after IITSOT. The bad guys have been building up an empire in the Mediterranean. The good guys have been sailing all over the globe, have turned the British Isles into an oasis of civilization, have started Lewis-&-Clarking the North American continent, and have decided it's time to have a showdown with the baddies.
.
What's To Like...
Like IITSOT, this is a fast-paced, action-packed book. The good guys go courting the Babylonians as allies (well, the Akkadians, actually) in an out-flanking maneuver. After disposing of the nasty Assyrians, they also go wooing the Hittites and the Trojans. How's that for some non-stereotypical allies?
.
Unlike Clive Cussler novels, bad things happen to the good guys. The Nantucket naval fleet runs smack-dab into a hurricane (with devastating results). The Babylonian venture is jeopardized by an outbreak of small-pox. The native priests blame it on the foreigners, and they might be right. It's never quite clear exactly how the outbreak started.
.
Meanwhile, the bad guys are actually doing some smart (and good) things. They overrun Sicily, they set up a fortified city at the straits of Gibraltar, and they reward some of their slaves by freeing them after years of faithful service.In short, the two sides are very equally balanced.
.
What's Not To Like...
The plot loses just a bit of steam in ATTOY, but that's inherent in the middle book of any trilogy, including Tolkien's The Two Towers.
.
The same minor irritations from IITSOT carry over - Stirling's penchant for the emptying of the bowels as people die in battle, the excruciatingly tedious details about the science of sailing, etc. And now, about 25% of the political hero's vocabulary seems to consist of one word : "Ayup!"
.
Finally, unlike Volume One, there isn't any great big climax to close out Volume Two. The tension builds, the two forces meet on the plains of Ilium, and... um... and it's time to buy Volume Three.
.
Why Theology And Time-Travel Don't Mix...
Stirling isn't a big one to go into the theological implications of dropping a bunch of Yankee Christians back into 1250 B.C. The good guys allow the proselytizing of the Bronze Age England natives, and Stirling touches briefly on the fact that inroads are made. It's never clear if the natives comprehend the dogma, or if they merely accept the gods simply because they came with the conquering heroes.
.
Which got me to thinking - just how would one go about preaching the Gospel? Do you ask the barbarians to accept Jesus as their Saviour, when He's not going to show up for another 12½ centuries? And if you die before He does show up (which is a certainty), exactly what happens to you? Do you get a "Get Into Heaven Early" pass? Do you get to sleep for 1250 years (putting Rip Van Winkle to shame)? And do you make a note to interfere with Biblical history in the future, to make the Gospel story come out different? Did God zap these blokes back 300 years as some sort of cosmic joke, or did He have a purpose? Or perhaps this is all better explained as being an example of the Butterfly Effect.
.
But I digress. ATTOY is still a good read, albeit not quite up to the lofty standards of IITSOT. Despite being a bit anticlimactic, you'll still want to immediately start into the 630 pages of Volume Three, to make sure Good does triumph over Evil. This is still the best Alt-History I've read so far.
Posted by Hamilcar Barca at 12:48 PM No comments: