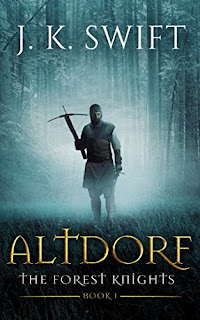 After decades of fighting against the Saracens in the Holy Lands, Thomas and his bedraggled band of crusaders have returned from the Holy Lands to their home in Switzerland.  Their losses over the years have been grievous, which is not surprising, since they were conscripted into active military service when they were just boys.

Everyone in Thomas’s little group has his own specialty.  Ruedi’s a marksman with the crossbow, Gissler is the best all-around fighter, Urs is a blacksmith, Max a herbalist, and Anton serves as the group’s medic.  Finally there’s Pirmin, Thomas’s best friend, who has the build of a giant and who’s the guy you want at your back when fighting in close quarters.

They are going to split up now, with each of them trying to find a new way to make a living.  Thomas is resigned to becoming a farmer in his home town of Schwyz, although he’ll keep an eye out for other career opportunities.  One thing he doesn’t want to do is fight for or against anybody anymore.  He’s seen too much killing and bloodshed.

But the Habsburg Austrians currently control Switzerland with an iron fist, and some of the locals yearn for freedom.  A few of them are even in active rebellion against the Habsburg rule.  They’d love to add Thomas to their ranks.  Thomas wishes they’d go away and leave him alone.

What’s To Like...
Altdorf – The Forest Knights is a reworking of the classic William Tell story, which, as the author points out in the “Historical Notes” section, is probably more legend than fact.  We all probably are familiar with the jaw-dropping display of archery at the end of the tale, but here it was a treat to learn the historical circumstances behind it.

The story takes place in 1314, and is set mostly in and around the town of Schwyz, the capital of the Swiss canton with the same name.  Thomas is the protagonist, but a lot of the secondary characters are well-developed and interesting, including the hot-headed rebel, Noll, and the village healer, Seraina.

I liked Thomas’s pragmatism.  He reasons that any acts of defiance by Noll and his pals against the overwhelmingly powerful Austrian troops will surely bring strong and lethal reprisals down upon the heads of the local populace.  So although Noll may be an idealist, he’s also a threat to everyone in Schwyz.

Three different religions – Christianity, Islam, and the pagan “Old Religion” – get attention here, and it was gratifying to see the way J.K. Swift treats them all with an equal degree of respect.  Seraina learned her healing lore from the Druids and Thomas learned his from Saracen doctors during the Crusades.  Combined, their medicinal knowledge is formidable.  OTOH, organized religion is portrayed as being both superstitious and corrupt, which is historically accurate.  Its measures, such as how to determine if a woman is a witch, are much grimmer than the Monty Python Holy Grail skit.

The story has a romantic subplot in it, but it doesn’t get in the way of the action-adventure main plotline.  The pacing is quick, even to the point of skipping over potential slow spots, and I thought the writing style, a storytelling-mode with just the right amount of wit and humor blended in, was well done.  Also, the plotline occasionally teases us with an element of “is all of this natural or is there some magic involved?”, and I quite liked that.

Everything leads up to a suitably exciting ending.  It’s a bit over the top (the “black-crested gull” part), but that’s not a criticism; it’s standard fare for most action-packed adventure novels.  The book ends at a logical spot, and sets up the sequel, but this is also a standalone novel.

Excerpts...
“If I had your youth, my lord, I would gladly be on that field winning my share of honors.”
“Honor is a myth.  The tourney was created to keep our warriors occupied in times of peace.  To prevent the dogs from turning on their masters, if you will.  A soldier is a tool of the nobility.  One that must be stored with care, mind you, and sharpened regularly, but nothing more.”  (loc. 622)

The old woman halted in front of Thomas and pushed back the hood of her cloak, letting much-needed light into eyes whitened with age.  She kinked her neck up at an awkward angle to look at Thomas and stared at him, her eyes scrutinizing his face and coming to rest on the pale jagged line running down the left side.  For all her physical ailments, her voice was surprisingly strong and clear.
“You would be the one they call the ferryman.  They said I could tell by the scar.”
“Or the ferry,” Thomas said, nodding at the barge he stood on.  “You looking to go to the other side, old woman?”
“Not yet,” she said, offended.  “I have a few more years in me.”  (loc. 934)

Kindle Details…
Altdorf – The Forest Knights is presently free at Amazon.  The other book in the series, Morgarten – The Forest Knights, sells for $5.99, and I think this is a completed series.  J.K. Swift has three books in a second, related series, Hospitaller Saga, and they’re in the $2.99-$5.99 range, plus several novellas in his Keepers of Kwellevonne series, which are in the $0.99-$1.49 range.

“Beware old ladies and children trying to kill you in your sleep.  (loc. 432 )
There are some quibbles, none of which are show-stoppers.  First and foremost, the book could really use another round of editing.  The persistent lack of commas when directly addressing someone (the “Let’s eat grandpa!” syndrome) was mildly irksome, and things like the two spellings of a character’s name (Mathias/Matthias) are just carelessness.

Most of the characters are either black or white.  The Austrians as a whole are without any redeeming qualities; the Swiss are mostly white-hats, with one or two baddies mixed in.

There’s a slew of cussing, a proxy deflowering, and a rape.  This is probably not a book for juvenile readers.  And while the “Historical Notes” section at the back was delightfully informative, it mostly just covers the "William Tell" angle.  I would’ve liked to have learned more about which of the historical events and places were factual and which were fictitious.  Oh well, that’s why the gods gave us Wikipedia.

But this is all nitpicking.  For me, Altdorf – The Forest Knights was an unexpected treat, covering a part of Swiss history that I, an avowed history buff, knew next-to-nothing about.  The e-book’s been sitting on my Kindle for quite some time, and I’m happy to have finally gotten around to reading it.