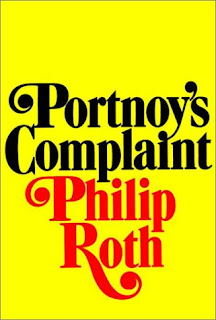 Overall Rating : C.
.
Philip Roth's best-known work caused a sensation when it came out in 1969, for its shock value, sexually-taboo subjects, and Jewish humor. The book is essentially a 300-page monologue by the book's protagonist, Alexander Portnoy, to his shrink, one Dr. Spielvogel. Alex recounts his life, in more-or-less chronological order, focusing extensively on his four favorite sex partners - "The Monkey", "The Pilgrim", "The Lieutenant" (attempted only), and his hand. We won't mention the liver, the cored apple, the bottle, and his sister's bra.
.
What's To Like...
If you like the Mel Brooks style of humor, you'll enjoy PC. One-line zingers abound, such as, "The perfect couple : she puts the id back in Yid; I put the oy back in goy."
.
The book was banned in Australia when it came out, which naturally stimulated sales Down Under. It is self-deprecating, and obviously semi-autobiographical; so you'll have fun trying to figure out how much of this was drawn from Roth's life. You'll meet his domineering mother, his Willy Loman-esque father, and his plain-and-patient sister. You laugh as Alex tries to cope with his Jewish heritage and survive in a goy world.
.
What's Not To Like...
It's a monologue. A very lonnnnnggggg monologue. Try imagining having to listen to a Mel Brooksian rant for, say, 12 hours straight. It may be funny at first, but it grates on one's nerves before very long.
.
There's no plot. There's little progression, other than Alex grows older. And if you're looking for Alex to impart to you some grains of experiential enlightenment, forgetaboutit!
.
So. Now vee may perhaps to begin, Yes?
I think the book's chief value lies in its ground-breaking impact when it came out. Up till then, American literature was pretty tame. And boring. No cuss words, nothing to offend the WASP and the Jewish communities, and above all, nothing about S-E-X. Portnoy's Complaint burst through all that phony Puritanical bullsh*t, and made people laugh while doing so. And the rabbis and Jewish leaders couldn't call it anti-Semitic, cuz Philip Roth is Jewish.
.
Nevertheless, the book didn't age well. The shock-threshold has long been exceeded, and without that, the limitations of a chapterless, 300-page monologue are exposed. As you tire of the same themes and the same humor, you'll find it difficult to keep reading the book. I did complete it, and I'm happy about that, but it'll be a long time before I read another Philip Roth book.
Posted by Hamilcar Barca at 5:38 PM No comments: