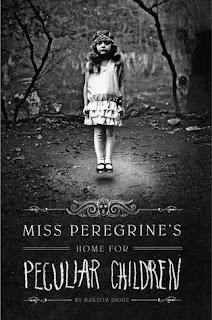 Those were Grandpa Portman’s dying words to Jacob, so they must be important.  Even if they don’t make a lot of sense.  Of course lots of things that Grandpa said recently were weird.  Strange stories about his youth, like fleeing from his native Poland during World War 2 to a children’s home in Wales, where there were a bunch of odd kids.  One was invisible, another had bees in his mouth, a third could rise off the ground like a balloon.  Jacob thinks Grandpa was trying to see how gullible he was.

And he had photos, too.  He showed a couple of them to Jacob once.  The picture of the levitating girl is on the book's front cover.  It's obvious the photos were staged, of course, and not very skillfully.

But now Grandpa’s bleeding to death – attacked by some weird being with tentacles coming out of his mouth.  Jacob saw him hiding in the bushes, yet strangely enough, Jacob’s friend Ricky says he didn’t see any such monster, and he was right there too.  And Jacob is a troubled teen, plagued by nightmares, so maybe his subconscious is imagining things.

Maybe he should see a shrink.

The book is written in the first-person POV (Jacob’s), and I found it to be an easy, straightforward read, which is the norm for YA.  The story is 352 pages long, plus some “extras” in the back, including Photo Credits, Acknowledgements, a “Conversation with Ransom Riggs (wherein the blending of old-&-odd photographs with storytelling is discussed), plus some photographs that weren’t used (those were really interesting), and the first couple pages of Book 2.

Besides having to deal with monsters, magic, and murderous mayhem, our protagonist Jacob also has to cope with an unhappy home life, including an alcoholic father.  Most of the book is set on Cairnholm Island, just off the coast of past-and-present Wales, and I thought Ransom Riggs, born and raised in the USA, captured the mystique of the Welsh culture quite nicely.  There are some quaint local expressions to figure out, such as “taking the piss” and “right bomper”, but the book is unmistakably written in “American”.  There’s a brief impromptu “Welsh rapping” session, which is not to be missed

Cairnholm Island is both fascinating and fictitious, and I liked the quite-real “bog bodies” (the Wikipedia link is here) being worked into the plotline,.  There's a British TV show I’d never heard of called “Father Ted”, and even a brief tie-in to America’s poster-boy cannibal, Jeffrey Dahmer.  Eerie critters abound, such as syndrigasts (better known as crypto-sapiens), wights, hollowgasts, flashlight fish, shadow beasts, and utterly intriguing “ymbrynes”.  Ransom Riggs handles the time-travel aspect in a most innovative way.

I liked the way the main story thread – trying to make sense out of Grandpa Portman’s last words – unfolds gradually.  For every answer that Jacob uncovers, several new questions arise, and this keeps the reader turning the pages.

The ending is suitably exciting, with Jacob and his newfound peculiar friends having to save the day, which is accomplished, albeit not without some losses.  The story stops at a logical point – Jacob finally grasps what is going on and has to choose a difficult path forward.  I wouldn’t call it a cliffhanger ending (I despise those), but there are a couple major unresolved threads, which presumably act as motivation to read the next book, Hollow City.  The story closes with a bittersweet epilogue, which I thought was particularly well crafted.

Excerpts...
“In some corners of the world we were regarded as shamans and mystics, consulted in times of trouble.  A few cultures have retained this harmonious relationship with our people, though only in places where both modernity and the major religions have failed to gain a foothold, such as the black-magic island of Ambrym in the New Hebrides.  But the larger world turned against us long ago.  The Muslims drove us out.  The Christians burned us as witches.  Even the pagans of Wales and Ireland eventually decided that we were all malevolent faeries and shape-shifting ghosts.”  (pg. 154)

“You’re right, Dad.  Dr. Golan did help me.  But that doesn’t mean he has to control every aspect of my life.  I mean, Jesus, you and mom might as well buy me one of those little bracelets that says What Would Golan Do?  That way I can ask myself before I do anything.  Before I take a dump.  How would Dr. Golan want me to take this dump?  Should I bank it off the side or go straight down the middle?  What would be the most psychologically beneficial dump I could take?”  (pg. 179)

“How many times must I tell you … polite persons do not take their supper in the nude!”  (pg. 165 )
Miss Peregrine’s Home For Peculiar Children is marketed as “YA fiction”, which gave some Amazon and Goodreads reviewers a bit of heartburn.  But what exactly is the YA age-range?  Well, Wikipedia defines is as “12 to 18 years of age”, with subject matter that correlates “with the age and experience of the protagonist”, and based on that, I’d call this book entirely appropriate for YA readers.

There was more cussing in it than what I’d expect in a YA book, but nothing that a teenager hasn’t heard in the hallways at school.  Jacob experiences “first love”, another common YA theme, but it doesn’t progress beyond some kisses.  There are no drugs, and the only booze around is consumed by Jacob’s alcoholic father.  There is some violence and bloodshed, too much to label the book a “cozy”, but not enough to call it “R-Rated”.

For me, the book started a bit slow, but that’s not uncommon in a “Book One” in any series, since it’s necessary to build a new world, introduce the main characters, and provide a backstory.  I’d recommend MPHFPC to any teen or adult looking for something just a tad bit darker than the Harry Potter series.  Just keep in mind you’re in it for five books’ worth, and should probably read them in order.

8½ Stars.  In the “Conversation with Ransom Riggs” section, the author describes this first book as “opening a door and discovering a world”, and the next one as “exploring that world”.  Books 2-4 are on my Kindle, and I’m looking forward to exploring this brave new world alongside Jacob.
Posted by Hamilcar Barca at 4:34 PM