The Spy in the Ointment - Donald E. Westlake 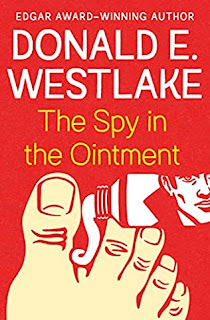 Acronyms can be confusing.  Sometimes a single letter can make a huge difference.

For instance, Gene Raxford is the National Chairman of the organization CIU, which stands for Citizens’ Independence Union.  That’s not as impressive as it sounds: because although they boasted 1400 members in 1952, that number's now shrunk to only 17, and 12 of those are on the “inactive” list.  CIU-ers are confirmed pacifists.  Mahatma Gandhi would pick a fight you sooner any of them would.

Then there’s the WCIU, which stands for World Citizens’ Independence Union, which has a radically different philosophy.  They like to bomb things, mostly people and places.  They’re just one of a bunch of small like-minded extremist groups in the greater New York City area.

Gene has just been invited to a tip-top super-secret meeting for violent subversive groups.  The people who invited him are confusing the WCIU and the CIU.  They’ve given him the time and place for the meeting, and Gene probably should skip it and let them know of their mix-up.

But then what?  Maybe the bad guys will see him as a security threat and send someone to kill him.  If only someone could tell Gene the safest thing to do.

Like the FBI agents that have bugged his phone, his table lamps, and his toilet tank.  Or the one hiding out in his basement.  Or the ones that empty his wastebaskets every day, in hopes of finding incriminating evidence.

What’s To Like...
The Spy in the Ointment was published in 1966, and can perhaps be best described as an “amateur secret agent satire”.  The story is told in the first-person POV, Gene’s, as he muddles through the training and execution of an undercover sting on behalf of the FBI.   He’s accompanied by his current squeeze, Angela, who’s blonde, rich, and said by Gene to be “as healthy as a horse.  But better-looking.  But not quite as bright”.

It was fun to be immersed in pre-computer technology again.  Your copier is a mimeograph machine, presentations are done with an easel and big poster cards, and telephone numbers are given as 7-character alphanumeric combinations such as: “CHelsea 2-2598”.

I liked Donald Westlake’s portrayal of 1960’s radicals.  The bad guys want to merge all the extremist groups (whether radical left or radical right; it doesn't matter) for strength in numbers, but their squabbling at the kick-off meeting is simultaneously hilarious, self-defeating, and sad.  I sat in a couple such meetings in the early 70’s, and watched each group wanting its own personal agenda to take precedence over everybody else’s.  It’s a wonder any demonstration was ever successfully carried out.

The plotline is sustained by Gene’s caustic wit and the mutual ineptitude of all involved parties: the FBI, the radicals, and even Gene and his friends.  You can put Gene through a grueling training program (but only for five days), and give him lots of super-neato spy gadgets (like James Bond gets at the start of each mission), but in the end you still have in incompetent civilian and a plan that has no chance of succeeding.

The ending is a mixed bag.  Donald Westlake throws in a couple twists, and our protagonist has to decide whether his self-proclaimed pacifist philosophy is worth compromising for the greater good.  Disaster is averted (well, you knew that was going to happen so it's not a spoiler), but not without some over-the-top action to make it so.  And just when you think everything's about to settle down, the Epilogue shows up with a fresh round of unexpected mayhem.

Excerpts...
“Take this.”
I said, “Why?”
“Bottoms up,” he said.  “We’ve still got lots to do.”
So I put the capsule in my mouth, downed it with water, gave him the glass back, and said, “Is it all right if I know what that was?”
“Certainly,” he said.  “A microphone.”
“A who?”
“You will excrete it,” he said, “in approximately three days.  In the interim, you will be able to record and broadcast all conversations held in your presence.”  (loc. 1521)

“Try to relax.”
“Sure.  The cops are after me, I’m on my way to join an organization of lunatics and bombers, I’m wired for sound, my necktie turns into a smokescreen, my handkerchief will make you throw up, my Diner’s Club card explodes, I’m the leader of a subversive terrorist organization composed entirely of undercover federal agents, newspapers all over the country are saying I killed my girl, and I’m on my way to meet a twenty-five-year-old Nazi built like Bronco Nagurski.  If relaxed means limp, don’t worry about it.  I’m relaxed.  I’m relaxed all over.  (loc. 1803)

“The thought of a lot of pacifists protecting me from a lot of terrorists … just somehow doesn’t fill me with confidence.”  (loc. 581 )
Not everything about returning to the 60’s is positive.  Racial pejoratives were both common and acceptable back then, and several of them show up here.  I recognize that Donald Westlake can’t be blamed for using such words in The Spy In The Ointment, but it’s still feels like fingernails-on-a-chalkboard when I read it.

Also, in 1966, Women’s Lib was either barely around or nonexistent.  Angela’s role is basically to be a ditzy dumb blonde female sidekick, and Gene is thoroughly happy with this.

Finally, as intriguing as the overall storyline is – hapless Gene infiltrates a terrorist cell and thwarts their evil plans – there really isn’t a lot of action.  If not for Donald Westlake’s writing skills, this book might have been a trudge.

But the Westlake wit saves the day, and since I grew up in the 1960’s, none of these quibbles were surprising.  Indeed, the book gives me an appreciation for just how far we’ve come in the last 50 years in race-relations, feminism, and satire novels.  I am a big Donald Westlake fan, mostly due to his Dortmunder books, but it’s a nice change-of-pace to read some of his other stuff every so often.

6½ Stars.  Donald Westlake (1933-2008) was a prolific writer whose career spanned a jaw-dropping 50 years (1959-2009, plus three more books published posthumously).  A Spy In The Ointment is #35 out of 115 books, if I counted right at Wikipedia and if their list is comprehensive.  It would be another four years before the first Dortmunder novel was published, and IMO that’s when he really began to hit his stride.
Posted by Hamilcar Barca at 5:14 PM