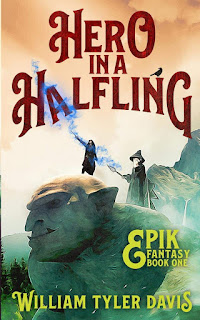 Epik is off to see the wizard.  He’s also off to see the big city of Dune-All-En.  He’s lived all his life in some hole-in-the-wall place called The Bog, and he’s all grown up now.   ”Grown up” is a relative term, though, since Epik is a Halfling.  To look him in the eye, you'd have to get down on your knees.  Even a dwarf would have to stoop a bit.

Epik’s dream is to become a wizard.  He’s been fascinated by magic ever since one of them popped out of nowhere years ago, sized up Epik, and declared him unqualified to be a wizard’s apprentice.  But the thought had been planted and halflings are not easily discouraged.

Sadly, the timing for Epik’s move to the big city couldn’t be worse.  King Simmons lives in a castle there, and is scheduled to die any day now.  It’s some sort of curse, exactly every ten years, whoever is on the throne dies, and King Simmons’s date with destiny is at hand.

Naturally, he'd would like to break that curse, and is understandably leery of any stranger who appears at the city gates.  All the neighboring kings are also suspect, and he's just outlawed all magic within the city limits, cuz you can't trust anyone who can cast a spell.  Most of Dune-All-En's wizards have already fled the city.

So Epik’s going to have a hard time even finding a wizard, let alone that will take him in and teach him the tricks of the trade.

What’s To Like...
Hero In a Halfling is set in a Tolkien-esque world, with lots of halflings, trolls, wizards, dwarves, elves, orcs, humans, and goblins mingling in among the sword-&-sorcery humans.  Tone-wise, this is more along the lines of The Hobbit than Lord Of The Rings.

But the literary nods go far beyond just Tolkien.  I caught references to Terry Pratchett’s Discworld series (most notably the Night Watch), to the movies The Princess Bride and Monty Python’s The Holy Grail, and to Walt Disney’s Snow White.  Even the setting, Dune-All-En, is a take-off of New York City, with locations like Jersy, Madhatten, Brook Glen, and Kings.

The pacing is rather slow at the start, although to be fair, William Tyler Davis has a world to build and a slew of characters and plot threads to introduce.  But about a quarter of the way through, Epik meets his wizard, and things hum along nicely thereafter.

The settings are pretty much limited to The Bog and greater Dune-All-En area.  The chapter titles are clever references to other fantasy titles, and with 310 pages covered by 36 chapters, it’s pretty easy to find a convenient place to stop reading for the night.  I liked the drinking song at 39%, and chuckled at puns such as “back-terra”, a new and potent poison.  There’s only a couple instances of cussing.  The Romance is no more than what you’d expect to see in a Discworld novel.

The ending is good.  It’s not the most exciting one I've ever read, but there are a number of twists to make up for that.  I was particularly amused by the way the love triangle (Epik – Gertrude – Myra) was resolved.

Kindle Details...
Hero In a Halfling is currently selling for $4.99, the same price the other two books in the trilogy go for.  Alternatively, you can pick up the whole trilogy as a bundle for only $7.99.

Excerpts...
Gertrude, Jed and Snow’s daughter, served as hostess and part-time bouncer.  She’d inherited her mother’s height, but her other features were of the dwarfish persuasion, giving her the look of a donkey without the hooves.  She was hairy, most of it damaged and frizzy, though the stray hairs on her face appeared feathery and light.  Her eyes had the golden brown sparkle of a cockroach in the sunlight.  They were watery and large like chestnuts.  (loc. 507)

The wizard brushed the tip of his nose and scratched his beard.  “You know,” he said, “I believe it’s time I teach you a spell.  Give you something to do with that thing.”
“You will?” Epik said incredulously.  He was still nonchalantly bobbing the wand between his hands.  “Now that we’ve already done all of this?  After we’ve beat trolls and orcs, saved the girl?  Now you’ll teach me something?”
“The timing seems right.  It never did before.”  (loc. 3033)

Two men, a giant, and a wheelbarrow, versus thirty men guarding a castle.  If only we had a wheelbarrow, he thought.  (loc. 2883, and a nod to The Princess Bride)
The quibbles are minor.  The footnotes didn’t work in my Kindle version, which was irritating.  But they’re all in their own section in the back of the book, so it was easy to work around this issue via the Index or with bookmarks.

I never did figure out the reason for the Collus/Coe mash-up.  Maybe it’s a reference to some fantasy book I haven’t read.  Sergeant Todder, a take-off of one of my favorite Discworld heroes, Sgt. Sam Vimes, has trouble with names of all of his underlings, but the Collus/Coe confusion was different.  Also, there was a reference to Christmas, at 46%, which felt awkward for an “otherworldly” fantasy setting.  I’m hard-pressed to think of any other fantasy novel I've read where Christmas is explicitly mentioned.

The most serious issue is the editing.  The mistakes were plentiful enough to be distracting.  A good proofreader/editor is always a worthwhile investment, even for an Indie author.  For example, although it’s short of being absolutely wrong, resume  looks downright funky when you’re trying to write résumé.  Here's a tip: Making those accented e’s is easy: just hold down the button while entering 0233 using the numbers pad.  You’re welcome.  J

7½ Stars.  Overall, Hero In A Halfling was an enjoyable read for me.  The wit and humor are clever, without being done to silliness.  The plotline was done well, and for what I presume is a debut novel, the writing was quite good.  If, like me, you’re always on the lookout for a book or author to satisfy your Discworld thirst, this one is worth your reading time.
Posted by Hamilcar Barca at 2:21 PM