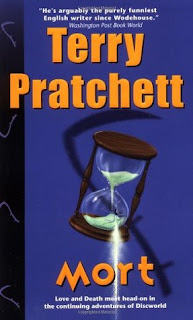 Everyone needs to take some time off once in a while.  Kick off the shoes, put aside the scythe, and just forget about the stresses of the job.  This is true, even if you’re Death.

Of course, you also need to have someone fill in for you while you’re away, especially if you’re Death.  It just won’t do to have the whole living/dying process put on hold. Time would grind to a halt, things would get crowded been should-be-dead critters, and there’s no telling what sort of Temporal Paradoxes would be spawned in the Multiverse.

But who can substitute for Death?  It’s not a profession that has a huge pool of practitioners, and it certainly wouldn’t do to have some amateur mucking around, screwing up the job.  It seems like there’s only one option available for Death.

Head out to the next job fair and hire an apprentice.

What’s To Like...
The three main story threads in Mort are a.) Mort learning on his own how to be Death’s  replacement (he gets zero on-the-job training), b.) Death’s R&R follies, and c.) the efforts to repair Mort’s first big career mistake.

Death’s antics, as he tries to understand what it means to be a human, are especially entertaining.  He applies for a job, goes fly-fishing, gets drunk, dances, and gambles, all in order to learn the meaning of “fun”.  You’ll be amazed at what the first job he finally lands is.

I always enjoy it when Multiverses show up in a story, and Terry Pratchett finds a unique  and imaginative way to handle the Temporal Paradox that Mort inadvertently creates here.  I chuckled at the Caroc Cards and the Ching Aling of the Hublandish, both fortune-telling devices, as well as Octarine, the magical eighth color of the spectrum.

The wizards at the Unseen University get a lot of ink, and that’s a plus.  I don’t recall meeting any dwarves, trolls, elves, or guards from the Night Watch, but there is a gargoyle and a princess.  Plus the Librarian makes an appearance (ook!!), with Rincewind serving as his assistant.

As with all Discworld novels, Mort is both a standalone story as well as part of a series.  There are a couple cusswords, but they’re few and far between.  You won’t miss much if you don’t read the Discworld books in their proper order.  As (almost) always, Terry Pratchett abstains from using chapter divisions, and sprinkles a fair amount of footnotes throughout the pages.  You don’t want to skip over those.  There are even “footnotes to footnotes”, which is something I don’t recall encountering before.

Excerpts...
Reannuals are plants that grow backwards in time.  You sow the seed this year and they grow last year.
Mort’s family specialized in distilling the wine from reannual grapes.  They were very powerful and much sought after by fortune tellers, since of course they enabled them to see the future.  The only snag was  that you got the hangover the morning before, and had to drink a lot to get over it.  (pg. 2)

The Disc’s greatest lovers were undoubtedly Mellius and Gretelina, whose pure, passionate and soul-searing affair would have scorched the pages of History if they had not, because of some unexplained quirk of fate, been born two hundred years apart on different continents.  However, the gods took pity on them and turned him into an ironing board (when you’re a god, you don’t have to have reasons) and her into a small brass bollard.  (pg. 110)

“You drunk I’m think, don’t you?”  (pg. 150)
The overarching theme of Mort is, of course, Death.  Even the title is a nod to this, since besides being short for the protagonist’s name, Mortimer, it’s the French word  for “death”.  Terry Pratchett’s thoughts on the subject here are both heartwarming and whimsical, yet theywere also sobering to me, since he’s no longer with us.

I thought the ending, which is primarily the resolution of the Temporal Paradox, was quite clever, although some nit-picky readers  might deem it a bit “convenient”.

In summary, Mort is one of the top-tier Discworld novels, highly entertaining, well-focused, and as good of a place as any to start reading this series.

8½ Stars.  It should be mentioned that Mort ranked #65 in the 2003 Great Britain reading survey called “The Big Read”.  Five Discworld books claimed spots in the Top 100 places, and fifteen in the Top 200, which is absolutely phenomenal.  You can read more about The Big Read here.
Posted by Hamilcar Barca at 3:26 PM