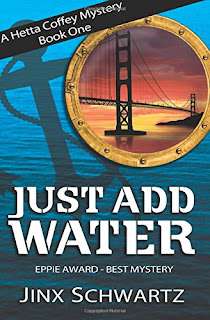 Hetta Coffey is on the prowl.  She’s looking for good-looking, rich, eligible men, and if they’re eligible and rich, frankly, that “good-looking” qualification can be overlooked.  Anything from young to old is fine, although middle-aged candidates might fit best, since Hetta is in that category, and she’s usually with her best friend and fellow-prowler, Jan, who is younger, perkier, curvier, and usually gets the pick of the prospective pack of suitors.

The trouble is, despite diligently hitting the local bars and nightclubs, the pickings of the prospective packs of suitors have been rather meager lately.  Part of this is Hetta’s fault, she still hasn’t gotten over getting dumped a couple years ago in Japan by one dastardly, smooth-talking (and married!) bastard named Hudson Williams.

But perhaps the average bar in Oakland, California is just not the best place to find quality potential lovers.  So maybe the time has come to find another pick-up perch.  Hey, I’ve got an idea!  How’s about going to a Yacht Club?  They serve lots of booze there, and all the clientele are going to be rich, boat-owning sailors.  In fact, there’s only one drawback...

To get into those clubs, Hetta will have to own a yacht.

What’s To Like...
Just Add Water is the Book One in the Jinx Schwartz “Hetta Coffey” series.  I read Book 6 last year (it is reviewed here), so it was neat to now go back and read how the overarching storyline began.  With the exception of the first chapter, which is actually a prologue, Just Add Water takes place in the greater San Francisco Bay Area, a lot of it on water.  I was tickled to see that Half Moon Bay gets a brief mention.  I’ve been there.

The book’s cover boasts it winning an “Eppie Award – Best Mystery”, but there isn’t a lot out on the Internet about that laurel.  I gather “Eppie” is related to the acronym of a now-defunct group called “EPIC”, which stands for “Electronic Publishing Industry Coalition”, and that they closed up shop this past May.

Having read two books in the series now, I’m gradually getting the feeling that it’s better to read these books as Women’s Fiction stories, than as Mysteries.  You’ll have more fun following the crazy lives of Hetta and Jan than trying to figure out whodunit.  Here, the murder-mystery itself doesn’t even show up until 52% Kindle, which means you’re clueless about the relevance of the prologue until you’re more than halfway through.

If you like perky female protagonists, you’ll love meeting Hetta.  Witticisms just flow from her lips.  Jinx Schwartz works a bunch of French phrases into Hetta’s dialogue thoughts, and I always like that.  Hetta and I also learned to be wary of anyone whose nickname is “Dilly”.

With the exception of the prologue, the book is written in the first-person POV (Hetta’s), and the 414 pages are split into 50 chapters, so you can always find a good place to stop for the night.  There is a bunch of cussing, but I thought that fit in well with Hetta’s sassiness.  Just Add Water is a standalone tale, as well as the first book in the series, and there’s a heartwarming Epilogue that ties up one of the threads.

Excerpts...
“Men ‘n’ dawgs.  Dogs ain’t worth a diddlydamn until they’re five, and men ‘til they’re fifty.  Canine maturity must have something to do with getting their pockets picked at an early age.  And they skip the infernal midlife crisis stuff.  Must be why dogs don’t buy corvettes and yachts.”  (loc. 370)

Chills.  Fever.  Dizziness, nausea and delirium.
Recognizing the symptoms, I hoped it was simply a reoccurrence of childhood malaria, but I suspected the dreaded love bug.
I was right.  Malaria, after several days of pure horror, goes away.  Love’s repugnancies burrow in.  Why can’t I throw up and get it over with?  And if falling in love is painful, falling into unrequited love is downright agony, although I’ve always found it does wonders for the waistline.  (loc. 3579)

Kindle Details....
Just Add Water sells for $3.99 at Amazon, which is the price for all the other nine books in the series.  Jinx Schwartz offers two 4-book bundles of the series for $9.99 apiece, and has one or two other books, unrelated to this series, available in the $0.99-$3.99 price range.

The world would be a much safer place if foreplay and hindsight could be reversed.   But boring.  (loc. 2573)
The ending is a mixed bag.  It’s suitably exciting and the Ultimate Evil wasn’t who I expected it to be.  OTOH, figuring out the reason why Hetta’s boyfriend jilted her was blatantly easy.  And if you’re hoping to figure out the whodunit before Hetta does, forget about it.  There aren’t any clues strewn about, and Hetta doesn’t give the whole thing much attention.

The manuscript needs another round of editing.  I can overlook spellchecker errors, particularly when reading something self-published and/or by an Indie author, but forgetting how you spelled the name of a company you just made up (is it Comtec or Comptec?) is sloppy, and misspelling Mean Joe Greene’s last name is just downright sacrilegious to this Pittsburgh Steelers fan.

Also, there’s a fine line between being wittily snarky and being annoyingly rude, and that line gets crossed a lot in Just Add Water.  One example: when a minor character who is Japanese gets introduced into the story, the background given is that he has a neighbor who’s Korean and he hates him because, well, you know, all Koreans are racists.  If this had been critical to solving the murder-mystery, then that would be justified.  But it wasn’t, which means it's just crass.

Finally, it doesn’t take a Fox newscaster to discern what the author’s political views are.  That might be okay for a political drama novel, but when I read a mystery, I’m interested in figuring out who the perpetrator is.  I don't care to know the author's political views, and I'm just as sure the author doesn't give a sh*t about mine.  Slipping one’s personal political views into the plotline isn’t clever, it’s amateurish.

7½ Stars.  Despite the right-wing bent to the book's banter, I still enjoyed Just Add Water.  So Just Add 1½ stars if, when you look in the mirror, your neck is red.
Posted by Hamilcar Barca at 3:27 PM