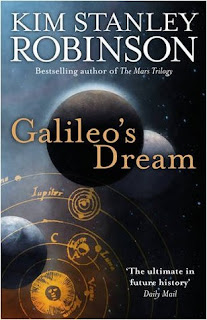 Galileo Galilei.  What a brilliant astronomer and physicist!  I read about him back in high school science class.  He was born in 1564, and died in 1633.  They called him “the first scientist” because he relied strictly on making detailed measurements concerning something, then developing conclusions and equations from his data.

I remember that he studied the speed and acceleration of things as they rolled down an inclined plane.  He also climbed up in the Leaning Tower of Pisa and dropped objects from there to the ground, carefully measuring how long they took to fall.  His conclusion was that objects always fell at the exact same speed, regardless of their mass,

He didn’t invent the telescope, but he greatly improved it, to the point of where he could see the moons of Jupiter, and eventually plot their courses.  He also studied sun spots and phases of our moon.  This eventually got him into trouble with the Church, since he concluded that Copernicus was correct – the Earth revolved around the Sun, not vice versa.  This contradicted scripture, and we all know God’s Word is infallible.

He was brought to trial by the Roman Inquisition in 1633, and given a chance to recant his heretical views.  But Galileo was a proud soul, and was unrepentant.  He was burned at the stake in 1634.

But wait!  I just read the Wikipedia article on him, and his biography reads differently there.  That’s impossible!  I’m sure I’m right.  Something’s changed!

I wonder how that happened.

What’s To Like...
Galileo’s Dream is Kim Stanley Robinson’s ambitious blending of science fiction into the biography of Galileo Galilei.  It starts at the point where he discovers (or “invents” as he asserts) the telescope, with some timely help from a mysterious stranger.  Galileo becomes passionate about observing the skies at night, which leads to some unexpected space traveling, followed by some head-butting with the Church.

I liked the way Galileo is portrayed.  Yes, he is a brilliant polymath, but he is fully aware of this and full of himself.  He knows he’s smarter than anyone around him, and assumes that he can boss them around, win all debates with them, and subtly mock them without them being aware of it.  He’s right about those first two, but dangerously wrong about that last one.

To a certain degree, this is “hard science fiction”; the mechanics of the time-traveling is done quite innovatively via the use of syncopes.  Yeah, I had to look that word up too.  The fact that the aliens are from 3020 AD means Kim Stanley Robinson can infuse quantum physics into the story.  So things like multiverses and the ten dimensions of time/space crop up.  The biographical parts are well-researched; I read Wikipedia’s page on Galileo after finishing the book and was surprised how many of the story's details were historically accurate.

The storyline flip-flops between Galileo’s life on Earth and a crisis up on Jupiter into which he’s drawn.  The aliens may be far more technologically advanced than us, but they suffer from the same human foibles present in both our and Galileo’s time.

The text is a wordsmith’s delight.  A couple of the more prominent fancy words are given below, but there were dozens more.  If you’re looking to expand your vocabulary, this book’s for you.  Learning the nuances of déjà vu, presque vu, and jamais vu was enlightening, as was attending a Jovian Carnivale with some Dionysians.

I thought the ending was so-so, but that’s probably because I was already familiar with Galileo’s life.  The final chapter deals with events going on a century after his death, and I thought it was quite powerful.  The “Author’s Note” after that is well worth reading.

Excerpts...
He had been so sure that the tides on Earth were the result of the ocean sloshing around in its basins of stone, shifting as the Earth both rotated and flew around the sun, creating differential speeds.  But here they said it was not true.  In that case, what causes tides?  The tug of celestial bodies – but that was astrology all over again.  And yet they seemed to be saying it was so.  Was astrology right, then, with its celestial influences and its action at a distance, action without any mechanical forces applied?  He hated such nonexplaining explanations.  (loc. 2851)

“Galileo has always had a remarkably strong sense of proleptic intuition.  Indeed, when judged by that rubric, of anticipating future developments, I’ve read commentaries that rate him as the third smartest physicist of all time.”
“Third,” Galileo scoffed.  “Who are these supposed other two?”
“The second was a man named Einstein, the first a woman named Bao.”
“A woman?” Galileo said.
Hera shot him a look so full of contempt and pity, disgust and embarrassment that Galileo cringed.  (loc. 3055)

Kindle Details…
Galileo’s Dream sells for $4.99 at Amazon.  Kim Stanley Robinson has a couple dozen other e-books for your reading pleasure, all of them in the science fiction genre, and ranging in price from $2.99 to $13.99.

“If I have seen less far than others … it is because I was standing on the shoulders of dwarfs.”  (loc. 2906 )
There are some quibbles.  There’s a lot of cussing, and while I’m sure people in the 1600s swore just as much as we do today, I didn’t feel it added to the story in any way.

The sci-fi-to-biography ratio is skewed heavily to the latter, so if you’re in the mood for some epic science fiction, you may be disappointed with Galileo's Dream.  There are a bunch of historically real Italian characters to meet and greet, and it was quite the challenge to remember who was doing what.  In fairness, I think Kim Stanley Robinson’s attention to historical accuracy at times constrained what he could do with the storyline.  A number of characters who really existed die at untimely times.

Also, the history-tampering ploy seemed obvious to me.  It’s the same literary device as was used by Jasper Fforde in The Eyre Affair.  But to be fair, if I hadn’t read that Fforde novel, I’d be praising the way Galileo’s fate was handled here.

Last, and most importantly, the Jovian crisis is never tied up.  We do get some hint at what's causing all the grief, but the conflict is still there by book's end.  Still, if you think that 2001 - A Space Odyssey had a great ending, you'll probably like this one as well.

6½ Stars.  Add 1 star if you have no idea who Jasper Fforde is.  Don’t let my quibbles deter you from reading Galileo’s Dream.  This was my first Kim Stanley Robinson novel, and I have a couple others of his on my Kindle.  They look like they’re straight-up science-fiction, so I’m looking forward to reading them.
Posted by Hamilcar Barca at 2:38 PM