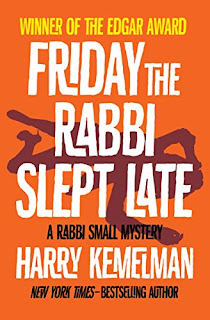 It was a shocking crime in a quiet, upstanding neighborhood.  The victim, a nice 20-something girl, was strangled with her own necklace, and the body dumped in a church parking lot.

Well, technically, it was a temple parking lot, since it was a Jewish house of worship.  The crime was committed late at night – the police say it was after midnight – and the body not discovered until the next morning because it was hidden behind an outside wall.

There was only one car in the parking lot that evening, and it belongs to the rabbi in charge of the temple.  But he’s known to often leave his vehicle there overnight and besides, a rabbi – like a Catholic priest or a Protestant minister – is pretty much above suspicion for a crime like this, right?

So why was the young woman’s purse found in the rabbi’s car, tucked underneath the front seat?

What’s To Like...
Friday the Rabbi Slept Late (and the whole series for that matter) is a mix of two genres: Jewish Literature and Murder-Mystery.  That may seem like an odd combination, so Harry Kemelman inserts a brief section called “The Creation of Rabbi Small” the the start of the novel, and I found it quite informative.  The book is an incredibly fast and easy read, with 28 chapters covering 198 pages.  The whole story takes place in the greater Boston area, more accurately a small fictitious seaside town called Barnard’s Crossing.

The murder-mystery is structured so that the reader can accompany our amateur sleuth, Rabbi David Small, as he tries to figure out whodunit.  The clues are there, along with lots of red herrings, for anyone to piece together.  I happen to like mysteries where I can vie with the protagonist to see who can solve the crime first.  Here, I’m happy to say that I correctly deduced the key clue, but failed to fit it together with other info to identify the perpetrator.

The book was published in 1964 and I really enjoyed going back to those times (I was 14 then) and seeing how much has changed.  Wives were generally homemakers, many couldn’t drive, and most of them, even the “white hat” ones, smoked cigarettes.  Males used hair gel for that “greasy kid” look, and some of those in management weren’t above patting female underlings on the rear, especially if they were attractive, a practice that was frowned upon by some, but not openly condemned by anyone.  A typical house in Barnard’s Crossing cost about $20,000, and Rabbi Small’s annual salary was $9,500.  Racial epithets were in common usage, and rock-n-roll was considered by adults to be crazy music.  Every car had two keys: one for the ignition and doors, and one for the trunk.

There are only a few cusswords, and although the murder occurs “onscreen”, there is no blood.  This doesn’t quite qualify it as a “cozy mystery”, but it comes close.  It also should be mentioned that anti-Semitic bigotry rears its ugly head when Rabbi Small becomes a suspect.  Not very nice, but very realistic, even in today's world.

The book was very insightful about Jewish practices.  One example:  their prayers are mostly about giving thanks, whereas the usual Christian prayer is more of a petition for something.  Even within the Jewish temple differences existed.  Rabbi Small is a Conservative (Orthodox) Jew and wants to emphasize what sets his religion apart from his Christian neighbors.  His congregation is more “modern” (Reformed), and would prefer to “blend in” with the surrounding gentiles by stressing what they have in common.

Kewlest New Word  ...
Obtrude (v.) : to become noticeable in an unwelcome or intrusive way.
Others : Upstumped (v., for which, surprisingly, Google doesn’t supply a usable definition).

Excerpts...
“They say he’s careless about his appointments, careless in his appearance, even careless in his manner in the pulpit.  His clothes, they’re apt to be wrinkled.  When he gets up to speak in front of the congregation, or at a meeting, it doesn’t look right.”
She nodded. “I know.  And maybe some of these critics blame me.  A wife should see to her husband.  But what can I do?  I see that his clothes are neat when he leaves in the morning, but can I follow him around all day?  He’s a scholar.  When he gets interested in a book, nothing else matters.  If he feels like lying down to read he doesn’t bother to take off his jacket.  (loc. 937)

“If you will tell me what happened, perhaps I can tell you what you wish to know, or at least be able to help you more intelligently.”
“You’re right, rabbi.  You understand that we’re bound be regulations.  My common sense tells me that you as a man of the cloth are in no way implicated, but as a policeman-“
“As a policeman you are not supposed to use your common sense?  Is that what you were going to say?”  (loc. 1125)

Kindle Details...
Friday The Rabbi Slept Late currently sells for $6.99 at Amazon.  All the other e-books in the series go for either $6.99 or $8.99, and if there’s a determining factor for choosing either of those prices, I don’t see it.

“Misfortune can happen to anyone.  Only the dead are safe from it.”  (loc. 2368)
Friday The Rabbi Slept Late garnered an Edgar Award in 1965 for “Best First Novel”, but I had some quibbles with it.

For starters, although I thoroughly enjoyed the inclusion of a plethora of Hebrew words in the storyline (Examples: minyan, Kaddish, Din Torah, kochlefed, Gaon, cheder, rebbitzin, S’michah, pilpul, and kipoh), less than half of them come with definitions.  Yes, I can certainly google them, but that’s still a minor PITA.  OTOH, the “7-WD stores” reference was both enlightening and hilarious.

The pacing is so-so.  The murder doesn’t take place until 30%-Kindle, so until then you pretty much have to content yourself with temple infighting and 1960’s daily life in Barnard’s Crossing.

Finally, the ending is anti-climactic.  Rabbi Small figures out whodunit, and conveys his reasoning and resulting conclusions to the local chief-of-police.  But the actual apprehension of the perpetrator is skipped over entirely.  One minute the rabbi is presenting his case, the next we’re in the epilogue, with everything already tied up.  Presumably the perp was taken in without incident and without protest.

7 Stars.  Friday The Rabbi Slept Late has to be rated in accordance with the state of murder-mystery novels in the 50’/60’s.  In that respect it does quite well, but like Science-Fiction, the genre has evolved significantly since then.  Amazon discounts select Rabbi Small e-books at times, and ISTR seeing the paperback versions in the bargain bins at Half Price Books.  If I come across another one in the series at a discount outlet I will certainly pick it up.
Posted by Hamilcar Barca at 5:35 PM