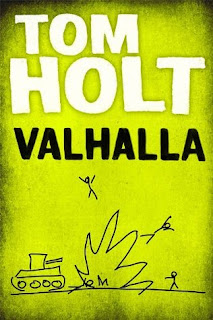 Valhalla!  A great hall located in mighty Asgard, administered by Odin, and every Viking warrior’s idea of paradise.  If you die in combat, the Valkyries will personally escort you there to spend the rest of your eternal existence in utter bliss.  But what exactly do dead heroes do to pass the time there?

Well, Valhalla is a drinking hall, so that’s one activity.  And since the Norsemen there have been fighting all their lives, that’s also what they probably consider to be a fun time.

But lately Viking warriors dying in battles are few and far between.  So The Valhalla Group Incorporated (they’re a business now) has branched out.  If one has enough money and the right connections, even common folk like you and me can enter Valhalla.  Odin will even tailor an afterlife to suit your fancy, at least to the best of his understanding of the modern way of life.

For instance, if you've been a cocktail waitress all of your life, you might end up as a serving wench in Valhalla.  For eternity.  Catering to Viking customers with some very outdated ideas about the role of women.

Or if you loved to play simulated war games with your buddies on weekends (think “paintball” or Civil War reenactments), you could find yourself doing the same sort of thing in Valhalla.  Except with real weapons and ammunition and getting blown to bits every day, then reincarnated every night.

What’s To Like...
Valhalla is one of Tom Holt’s mythopoeic stories, and those happen to be my favorite subgenre of his works.  I’ve read his hilarious takes on the Holy Grail myth (Grailblazers, reviewed here) and the Flying Dutchman (Flying Dutch, reviewed here) and found both of those to be quite entertaining.  Valhalla measures up nicely as well.

As with any Tom Holt offering, there are multiple storylines to follow, meaning readers need to stay on their toes to keep up with all the zaniness going on.  I noted five storylines in Valhalla.  They are:

1.) Carol finds herself wenching in the mead hall, and doesn’t want to do that for eternity.
2.) Her dad, Lin, an agent for the gods, pulls strings to rescue her.
3.) Howard plays real war games each day, every day, whether he wants to or not.  He dies a lot.
4.) Attila the Hun and other famous war leaders watch paint dry.
5.) Vinnie miraculously escapes death in disaster-after-disaster, no matter how long the odds.

Tom Holt is a British author, so Valhalla is written in English, not American.  You’ll travel on the M5, put on armour, be sceptical, get a flat tyre, become stroppy, put up with cissies, wear pyjamas, and use sellotape.

I’m a history buff, so I was happy to see the Battle of Chalons cited; it was the turning point for Attila’s invasion of Europe.  Ditto for the nods to Mithraism, Henrik Ibsen, and Robert the Bruce’s spider.  My present residence of Arizona gets mentioned twice, and I recall the Tesco’s stores from my visits to England, but had to look up  what “The Two Ronnies” is.  The “anti-thanaton displacement beam” may not be real, but it is way-kewl.

At 261 pages, the book is relatively short, and the 15 chapters average out to about 17 pages/chapter.  There’s a fair amount of cussing, but that’s about it for R-rated stuff.  Valhalla is a standalone novel, and not part of any series.

Excerpts...
It was bathtime; culture shock registering 10.9 on the Richter scale.  Not that old Attila had never got wet.  Far from it.  He could remember days and nights of unspeakable discomfort as the caravan trudged and squelched through snow and driving rain, the water streaming down the inside of his saturated clothes.  He’d always put up with it – no choice in the matter – but it stuck in his memory as one of the most wretched things he’d ever experienced.  Here, for some bizarre reason, they got wet on purpose; these people, with their amazing watertight roofs, had even built a special room just for getting wet in.  Perverts, the lot of them.  (loc. 1667)

“You hear the voice of Ronald McDonald inside your mind?”
“All the time.  Actually, he confuses me sometimes.  I remember once, we were besieging this castle in Normandy and nobody could understand why I kept ordering the artillerymen to bombard the walls with sesame seeds and dill pickle.  Still, he’s a bit more lively than the speaking clock.”  (loc. 3358)

Kindle Details...
Valhalla currently sells for $5.99 at Amazon, which is the price for most of Tom Holt’s e-books there.  You can find a couple going for $4.99, and his half-dozen or so most-recent e-books sell for $9.99.  Most, if not all, of Tom Holt’s novels are now available in Kindle format, which is a great thing, since finding them in the local used-book stores here in Arizona is a rare occurrence.

Your worst nightmare, if you’re a god: humanus ex machina.  (loc. 4560)
The ending is adequate and twisty, but not compelling.  All the disparate story threads mentioned above are deftly brought together and tied up, but to me things seemed rushed (it’s all done in a single chapter), and a case of humanus ex machina.

Still, Tom Holt novels are always steeped in absurdism, so this sort of ending should be expected, and might even be deliberate.  I’ve seen Amazon and Goodreads reviewers express difficulty in following the storylines in Tom Holt books, but that’s the essence of the absurd.

I tend to think Tom Holt books are an acquired taste.  They’re difficult to read at first, but once you get the hang of them, they’re delightful satires..

8 Stars.  If you end up reading Valhalla, like it, and want more of the same motif, I highly recommend Gods Behaving Badly by Marie Phillips (reviewed here).
Posted by Hamilcar Barca at 6:45 PM