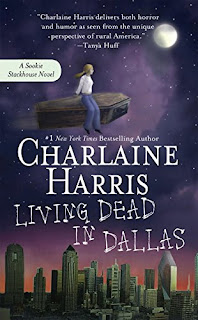 Sookie Stackhouse has been traded to Dallas!

Being a telepath makes Sookie a valuable commodity.  One of the Dallas vampires’ brethren has gone missing, and they’re pretty sure one or more of the humans that work in the vampire bar where he was last seen know something about his disappearance.  Of course, no mortal in his or her right mind would admit such a thing to their vampire employers, hence the need for Sookie.  You can keep the lips closed, but you can’t keep the mind from thinking about it.

So have fun in Dallas, Sookie.  Go read a couple minds, let the vampires know what you “see”, and come back to Louisiana and claim some easy money.

What could possibly go wrong?

What’s To Like...
Living Dead In Dallas is the sequel to the mega-popular Sookie Stackhouse book Dead Until Dark, and Charlaine Harris takes the opportunity to do some story-world and critter expansion.  Book 1 had only one vampire clan (Shreveport); now we’re treated to a second (Dallas).  There’s a couple more shapeshifters this time around, where there was only one before.  We meet a couple werewolves, although they seem to be a subspecies of the shapeshifters.  And we cross paths with a maenad, which is totally new.

There are three main storylines:  a.) the dead body in a car at the bar where Sookie works;  b.) the Maenad wishing to send a message to the vampires; and c.) Sookie’s stint with the Dallas vampires.  The action starts right away: the corpse-in-a-car is on page 5; and the pace never lets up.  Sookie gets beat up more times than Bruce Willis in a Die Hard movie, and when the bad guys aren’t pounding on her, they’re chasing her.

There’s a new set of baddies to deal with – The Fellowship of the Sun, and they’re a foe that’s both formidable and relentless.  I get the impression that they’re going to be around for a few more books too, and I’m looking forward to that.  The Fellowship of the Sun serves as the instigators of the main serious theme in Living Dead In Dallas: religious bigotry/fanaticism.  If that turns out to be a recurring theme, I could really start getting into this series.

Living Dead In Dallas is a standalone story, as well as part of the Sookie Stackhouse series.  All three plotlines get tied up by book's end, and the reader is left wanting to know where the Sookie/Bill relationship is going next, and who will be beating the crap out of Sookie in Book 3.

Excerpts...
“By the way, I haven’t heard an ‘I’m sorry’ from you yet.”  My sense of grievance had overwhelmed my sense of self-preservation.
“I am sorry that the maenad picked on you.”
I glared at him.  “Not enough,” I said.  I was trying hard to hang on to this conversation.
“Angelic Sookie, vision of love and beauty, I am prostrate that the wicked evil maenad violated your smooth and voluptuous body, in an attempt to deliver a message to me.”
“That’s more like it.”  (pg. 40)

I sighed deeply, and called Fangtasia, the vampire bar in Shreveport.
“You’ve reached Fangtasia, where the undead live again every night,” said a recording of Pam’s voice.  Pam was a co-owner.  “For bar hours, press one.  To make a party reservation, press two.  To talk to a live person or a dead vampire, press three.  Or, if you were intending to leave a humorous prank message on our answering machine, know this: we will find you.”  (pg. 241)

Kindle Details...
Living Dead In Dallas sells for $5.99 at Amazon.  The first book in the series, Dead Until Dark, goes for $2.99, the rest of the books in the series are all $7.99 apiece.  This is a completed series, the last book (#13) having been published in 2013.  Charlaine Harris has started several new series since then.

The three storylines aren’t cohesively woven together.  After the discovery of the corpse, that thread gets completely ignored while Sookie and Bill journey to Dallas, even though the victim was a close acquaintance of Sookie’s.  The maenad-with-a-message thread was also clunky, and my impression was that she was just a convenient means to disclose the killers so that Sookie and her telepathic talent didn’t have to snitch on anyone.

I kept waiting for the three storylines to eventually mesh, but they never did.  It’s almost as if the author realized that none of them would be long and complex enough for a full-length novel, so she just stitched them together piecemeal.  It was strangely similar to To Ride Pegasus, the review just previus to this one, but in fairness Living Dead In Dallas is a lot more entertaining and exciting.