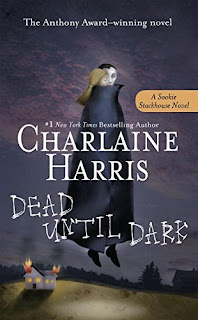 It was love at first fright for Sookie Stackhouse when Bill Compton came through the door at the restaurant/bar where she works as a waitress.  Not that Sookie’s an authority on the subject, since most guys tend to shy away from her because of her “disability”.

For it seems Sookie has the ability to read the thoughts of people around her and most guys, when they’re trying to hit up on a girl, really don’t want her to be able to do that.  You could call Sookie a telepath, although sometimes all she can read are emotions and feelings, not words.  Strangely though, she can’t read her boss’s mind, a fellow named Sam Merlotte.

Nor Bill's.  How her boss manages to mask his thoughts is a mystery, but that’s not so with Bill’s.  He’s a vampire.

Which is pretty creepy, except he’s a handsome, dashing, well-built hunk of a vampire.  And if nothing else, hanging around Bill is going to give Sookie some much-needed peace and quiet.  Hearing other people’s thoughts all the time can get quite noisy.  And tiresome.

What’s To Like...
I’m not a big reader of vampire novels, and I’m even less a fan of anything in the Romance genre, but I still enjoyed Dead Until Dark.  The writing is good and the mystery portion of the storyline was well-constructed.  I don’t recall any slow spots.  It’s easy to see why this became a hit series.

The story is told in the first-person POV (Sookie’s).  The chapters are long – only 12 of them to cover 327 pages, but it’s a fast-read, and there are usually several places in a given chapter where a scene-shift allows you to break off reading.

There are multiple storylines.  First off, there’s Sookie’s coming-of-age story, including a love triangle that she has to deal with.  But we also get to follow her as she tries to figure out who’s been killing a number of local women.  The victims all were strangled, but they also have bite marks on them, so any and all vampires quickly become suspects.

The overall tone of the book is light as Sookie starts to fall in love with Bill.  Both the reader and Sookie find the answer to questions such as “Can vampires do ‘it’?”, “Are they good at ‘it’?”, etc.  But there is a more serious theme explored - bigotry, as the residents of Sookie’s hometown of Bon Temps, Louisiana get used to “others” coming to live in their neighborhood.

There’s a lot of killing-off of characters, almost to a GRRM degree.  Most of the vampires, other than Bill, seemed only 'adequately' developed, but this of course could change as the series progresses.  Similarly, while there are lots of vampires, there’s only two other cases of “otherworldly” creatures.  I’m almost certain that list expands in the subsequent books.  I liked the coining of the word “fang-banger”, and chuckled at the choice of the main vampire’s name.  ‘Bill Compton’ is a revered figure in (my local) Phoenix music lore; as a DJ at the fledgling KDKB radio station, he made this city a national beacon for cutting-edge rock-&-roll music.

Dead Until Dark is a standalone story, as well as the introduction to a (completed) 13-book series.  The e-book ends at 88%, with the remaining 12% consisting of a preview of Book Two.

Kewlest New Word…
Codicil (n.) : an addition or supplement that explains, modifies, or revokes a will or part of one.
Others : Stertorous (adj.)

Excerpts...
I’d been waiting for the vampire for years when he walked into the bar.
Ever since vampires came out of the coffin (as they laughingly put it) two years ago, I’d hoped one would come to Bon Temps.  We had all the other minorities in our little town – why not the newest, the legally recognized undead?  But rural northern Louisiana wasn’t too tempting to vampires, apparently; on the other hand, New Orleans was a real center for them – the whole Anne Rice thing, right?  (loc. 46, and the opening paragraphs to the book)

I pulled a dress from the back of my closet, one I’d had little occasion to wear.  It was a Nice Date dress, if you wanted the personal interest of whoever was your escort.  It was cut square and low in the neck, and it was sleeveless.  It was tight and white.  The fabric was thinly scattered with bright red flowers with long green stems.  My tan glowed and my boobs showed.  I wore red enamel earrings and red high-heeled screw-me shoes.  (loc. 1512)

Kindle Details...
A Dead Red Heart sells for $2.99 at Amazon.  The next book in the series, Living Dead in Dallas, sells for $5.99, the rest of the books all go for $7.99 apiece.  This is a completed series, the last book (#13) having been published in 2013.  Charlaine Harris has started several new series since then.

“You won’t find a vampire in a Ford Fiesta.”  (loc. 3029)
I’ve been meaning to get acquainted with the Sookie Stackhouse series since eight years ago, when I was in a collaborative group book blog, and one of the other participants gave it a "highly  recommended" review/rating.  For some reason I was under the impression it was a YA series.  It is not.

There is some cussing and at least a discussion of child molesting.  Sex tapes also get mentioned, and there is a fair amount of sex itself.  So all in all, it is probably not something you want little Susie or Timmy reading at an early age.

That being said, there is nothing lurid or smutty about the sex scenes.  Indeed Dead Until Dark reminded me of a Stephanie Plum novel, but with vampires thrown in.  I seem to be  unintentionally reading a lot of this niche genre lately.

8½ Stars.  I concur with my former book blogmate and highly recommend Dead Until Dark.  I bought Book Three in the series, Club Dead, while it was discounted recently, and was happy to see my local library had 7 of its 10 copies of the first book available for the Kindle to borrow and download.  Maybe I’ll get lucky and find a copy of Book Two, Living Dead in Dallas, available as well.
Posted by Hamilcar Barca at 7:50 PM