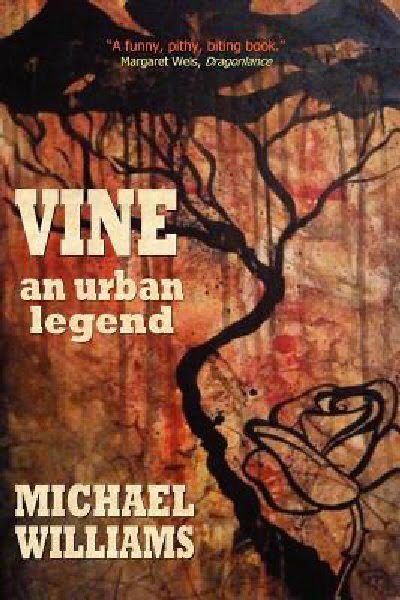 Stephen Thorne has decided to stage a play.   It is an ambitious undertaking – he wants to do an ancient Greek play called The Bacchae, and to stage it in Louisville, Kentucky, which happens to be Thorne’s old stomping grounds.

There is some competition – the nearby Baptist church is also working on putting on the play Our Town, and there are only so many people in Louisville with thespian aspirations.  But there are old acquaintances, and old flames, that Stephen can call upon to staff the cast and its understudies.

Interestingly, some of the old Greek deities have gotten wind of Stephen’s endeavor. In particular, the nine Muses have taken a keen interest in it.  Unfortunately, when Greek gods/goddesses meddle in the affairs of humankind, it’s almost always bad news for the mortals.

What’s To Like...
If you’re a Greek mythology buff (and I am), Vine : An Urban Legend will be a real treat.  In addition to the meddling Muses and main gods and goddesses, a bunch of minor myths are referenced, a lot of which I’d either forgotten or never heard of.

The same applies if you’re a Greek theater buff (and I’m not).  Michael Williams deliberately patterns the story in “ancient Greek play” format, including the Muses (and later, some of Louisville’s finest riffraff) as the requisite Chorus/Narrators.  I especially liked the way V:AUL is gradually subsumed by The Bacchae – the story about a play becomes a play within a play.

If you delight in new vocabulary words, this book will knock your socks off.  Williams is not shy about using obsolete or obscure words.  In lesser hands this could be tedious, but it works nicely here.  There is some subtle humor as well; including T. Tommy’s “Brischords” and an abductee who becomes somewhat of a PITA for his abductors.

There are some nice contemporary cultural references.  It’s been a while since I’ve seen the I Ching play a significant role in a book; ditto for Dungeons & Dragons.  And anything that pokes fun at Our Town is a plus.   I had to sit through it once way back in High School.  It was boring as all get out.

The characters are a pleasant lot, but not particularly memorable.  There is a very mild love triangle for those who like some romance in their readings.  Some of the language is R-Rated, but not to an excessive degree.  The ending is only so-so, but I suspect this is the way Greek plays are structured.  Pages-wise, the book is short, but I wouldn’t call it a quick read, thanks to the play-like format and the challenging vocabulary.

Kewlest New Word…
There were a slew of high-falutin’ words in the book.  Among the best were :
Callipygian (adj.) : Having well-shaped buttocks.
Others : Krater (n.); Insufflation  (n.); Empurpurated (v.); Piriform (adj.); Aleatory (adj.); Anagnoritic (adj.); Marmoreal (adj.).  I never did figure out a clear-cut meaning for Empurpurated.

Excerpts...
“Thunder grass: dope that creeps up on you, rumbles at your horizons, then climbs the back of your neck, sending warm consolation from your jaw to your ears and occipital, displacing you and paling the light by the courtside fountain until it becomes a summons to false bravery, a walk in the park in the dead of night when a man of 63 is subject to all dangers, from muggery to buggery to drowsing satyrs to coiled dragons guarding unspeakable treasure.”  (loc. 371)

Girls liked Jack, and there was something about him: he would stand well in the chorus, perhaps even lead it.
You have completely forgotten, Aron replied, that the chorus is women, and even if Jack Rausch likes that kind of thing I can’t imagine our chorus leader in drag…
To which the boys all laughed, reminding him that his was Euripides, that the women in Greek drama were played by men.  (loc. 3535)

Kindle Details...
Vine:  An Urban Legend sells for $2.99 at Amazon.  It appears it is “this” Michael Williams’s only offering for the Kindle.

”Sometimes you eat the god. … And sometimes the god eats you. ”  (loc. 5324)
For all its pluses, Vine: An Urban Legend has one major shortcoming – the pacing is incredibly slow.  Basically, nothing happens until the book is half over.  A brief, spoiler-free summary:

I’m guessing once again that this mimics classic Greek tragedies in general, and The Bacchae in particular.  However, the average, non-OCD reader will probably give up on the book long before the excitement commences.

Which is a shame, since the elements of this tale : cavorting gods, challenging vocabulary, homage to Euripides, and reality blurring with myth – are an innovative, ambitious, and alluring mix.

5½ Stars.  Add 2 stars if you are a fan of Euripides and have read The Bacchae.  I read the Wikipedia article on the play after finishing Vine, and wished I had done so beforehand.  Subtract 1 star if Greek gods and playwrights bore you to tears.
Posted by Hamilcar Barca at 6:26 PM