The Chickens of Atlantis - Robert Rankin 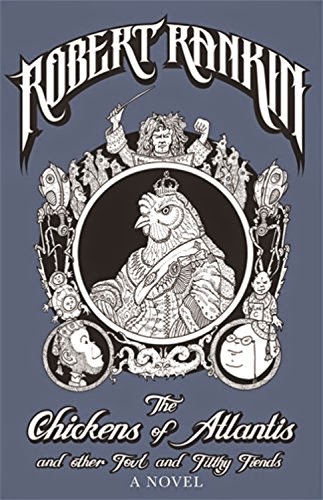 Meet Darwin, the Educated Ape.  He wants to travel back to 1824 Vienna and listen to Beethoven conduct his famous Ninth Symphony at its inaugural debut.

Meet Cameron Bell, Darwin's friend and partner in adventure.  He wants to save the world from the evil clutches of the Pearly Emperor, aka Arthur Knapton, aka a couple of other aliases.

Our two protagonists agree that dealing with the Pearly Emperor takes top priority, and after that there will be time enough for an evening of classical music.  Thwarting Evil's plans shouldn't be too hard, since our heroes have a retrofitted Martian time-ship and can chrono-hop to any convenient time-space spot to nab the villain.

But Arthur Knapton proves to be a slippery and crafty adversary, and has no qualms about messing with the past to change the timeline of History.  Then too, there are realms and dimensions that Darwin and Cameron can only dream about.

Including some wherein dwell the Chickens of Atlantis.

What’s To Like...
There’s lots of time-traveling and a passel of historical characters to meet and greet.  Our heroes travel backwards through Time, forwards, and sideways.  If you are tired of chrono-hopping stories where changing the timeline seems a no-no, then you’ll love The Chickens of Atlantis – all sorts of things get messed up along the way.

The Robert Rankin wit and craziness is still here, along with his usual literary memes like Fangio’s bar, the lady in the straw hat, and “gi-raffes”.  There are a bunch of footnotes that Terry Pratchett would be proud of, and some kewl first-letter drawings (there's probably a word for these) at the start of each chapter.  The text jumps between 1st-person and 3rd-person POV's, with Darwin being the narrator/author throughout.

If you’re a History buff, you’ll enjoy this story.  Winston Churchill is here, and Aleister Crowley too.  I particularly liked the way H.G. Wells was woven into the storyline.  Then there are the Martians and the Chickens, along with some other charming fictional characters.  But this isn’t one of those books that overwhelms the reader with somebody new every five pages.

The storyline seemed more coherent than usual for a Robert Rankin tale, and that can be viewed as either a plus or a minus.  For the most part, the setting can be described as “late Victorian steampunk’, which is way kewl.  The story ends nicely, and there is even –dare I say it – a “warm” epilogue given by Darwin.  Yet amongst all the zaniness, the reader will food for thought about things like Evolution, Creation Stories, and Alternate Timelines.

Excerpts...
“Are you not one of the faithful?” enquired my companion.
“I favour no particular credo,” said the barman, presenting Mr. Bell with his mug of ale.  “Rather I adhere to a syncretic world-view – that there is a little bit of truth to everything.  The rationalist within me holds to the opinion that he who claims to know everything labours under delusion, and that he who wishes to know everything would probably be better employed drinking ale and finding himself a girlfriend.  You will notice there, Mr. Bell, how I tempered wisdom with wit – to pleasing effect, I believe.”
Mr. Bell looked towards myself and we both rolled our eyes. ( pg. 52)

Some perhaps will say that it is “a missed opportunity”, that “the laughs were few and far between” and that it “simply petered out at the end”.  To those who would say such things, I offer my apologies.  I am sorry that my work did not please you, as I had hoped that it would.
But also I offer this warning, that should I ever meet face to face with any of the mean-spirited blighters who would say such cruel things and still retain the strength in my right arm -
Beware the flinging of faeces!  (pg. 339)

“It is best that we dismiss plot holes. … When dealing with time travel it is something of a free-for-all.”.  (pg. 134)
There are some quibbles.  The titular Chickens of Atlantis, while present, don’t really play a major part in the story.  The breaking of the “fourth wall” happens a bit too frequently for me; ditto for the number of self-references by Rankin.  The author also seems to anticipate some readers feeling the wit is neither abundant nor zany enough (see the second excerpt above), but frankly, I thought the tone and content worked rather well here.

This apparently is the fourth (and concluding) book in Rankin's series about Darwin the Educated Ape.  I wasn’t aware of this when I got the book at the library, but TCoA works just fine as a standalone novel.

Overall, I enjoyed The Chickens of Atlantis, despite it not being quite the “typical” offering from Rankin.  Personally, I prefer authors who can “change things up” a bit and aren't afraid to let their style “evolve” from one book to the next; so this book was a treat.  And if you’re a Rankin traditionalist, this is still close enough to the tried-and–true.
8 Stars.  Add ½ star if you read the other three books in the series in order.  Subtract ½ star if you were really looking forward to getting down with some Atlantean poultry.
Posted by Hamilcar Barca at 4:19 PM