To Journey in the Year of the Tiger - H. Leighton Dickson 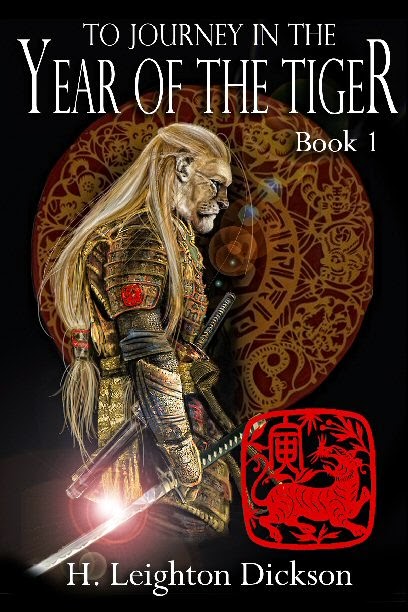 Someone – or something – has been killing the Seers.  One per night, every night.  No one knows why; no one knows how.  Originally, there were seven Seers.  Now there are only two.  It is imperative to find a solution, and quickly.  Especially if you are one of the two remaining Seers.

Kirin Wynegard-Grey, Captain of the Empress’s Personal Guard, has been given the task - Save the remaining seers.  He has a crack team - an Alchemist, a Scholar, his Geomancer brother, and a very competent fighter in Major Ursa – to assist him.

But is it enough?

What’s To Like...
The world-building in To Journey in the Year of the Tiger is original and convincing.  The setting is Earth in the distant future.  Cats, rats, and dogs are now anthropomorphic.  Our band of questers are felines of various persuasions – lion, tigress, cheetah, etc.  Humans are referred to as “The Ancestors”, and are nowhere to be found.

The writing is good; and the dialogue is oft times witty.  All the main characters are interesting. Outside of Kirin, one is never completely sure whether any or all of the others have hidden agendas.  There is also a sub-theme concerning racial purity.  Purebreds are good; mongrels are lower caste.  I’m not sure where the author intends to take this issue, but it makes for a timely topic.

TJitYotT is not a standalone.  Zero threads are tied up at the end of the book.  I normally find that off-putting, but here it was obvious that this was the start of a series, and at least the story terminated at a logical point, not with some banal cliff-hanger.

Excerpts...
The room smelled of leather, pine, and old ale, and he noticed the bottles also thrown carelessly across the floor.  He sighed.  If Kerris was drunk, this would be a problem.
The blankets began to stir.  Kirin nudged them with his foot.
“Wake up, dung beetle.”
“Mm. Go away.”
“The dawn sends you her greetings.  As does your Empress.”
“Kindly give the dawn, and Lyn-ling, my regards,” mumbled the blankets as a grey tufted tail whacked the floor in irritation.  (loc. 453)

“A cat-a-pult?”
“Yeah, I read about one once in a very old book.  It’s kind of a ground-based ‘sling for rocks.’  Apparently the Ancestors used to ‘pult’ cats.  Anyway, I tried it out, and it worked really well but when I tried to pult someone, he sailed up and away and into the sky and never came back.  Which was a shame, since he was my very first suitor and all.  My only suitor actually…  I never really figured out why, considering I have such pretty markings…”  (loc. 2464)

Kindle Details...
To Journey in the Year of the Tiger is a free download at Amazon.  Books 2 and 3 in the series both sell for $2.99 .  ANAICT, there will be more books in the series.

”If you snore, I will kill you.”  (loc. 2507)
There are some minor quibbles.  A map would’ve come in handy, especially when trying to figure out just how far “The Great Wall” extends.  The action is a bit sparse at times.  For most of the book, Mother Nature is the biggest adversary, and the bulk of the fighting consists of squabbling amongst the questers.  But patience is a virtue; at 90% we get a major battle, with H. Leighton Dickson proving she is more than capable of telling it in an exciting way.  And perhaps Book One’s raison d’etre is simply to introduce us to the protagonists and set the table for the rest of the series.

It is a risky task to use “Thundercats with Tails” as your main creatures in an Epic Fantasy.  But I thought it worked splendidly here, and it is refreshing to have a quest without any elves, dwarves, or hobbits.

8 Stars.  To Journey in the Year of the Tiger is the start of an ambitious, new Epic Fantasy series that succeeds admirably.  Here’s hoping the sequels are equally good or better.
Posted by Hamilcar Barca at 3:46 PM