The Eye of God - James Rollins 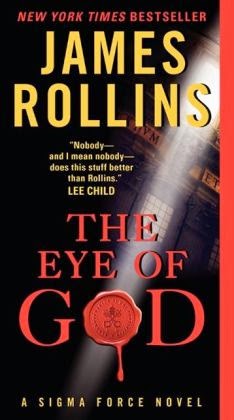 The end of the world is coming!  Okay, Doomsday prophets have been saying that for years.  But this time, Quantum Mechanics is saying it, so I guess we’d better take it seriously.

Oh yeah, QM has set a very definite “When” and “How” for the catastrophe.  Four days from now, via a comet.  So you might want to use up as much of your vacation time as you can.  Alternatively, we can call in Sigma Force to take save the world.

What’s To Like...
The Eye of God is the latest book in James Rollins’ “Sigma Force” series, and if you’re looking for fast-paced non-stop action, you won’t be disappointed.  If you like exotic settings, this is also your kind of book.  Our heroes hop all over the place – Rome, Macao, North Korea, the Aral Sea, Mongolia, and Lake Baikal.  Rollins doesn’t skimp of geographical details, so all these places have a “real feel” to them.

If history is your shtick, you’ve still come to the right place.  Attila the Hun, Genghis Khan, and Hungarian witch trials are all here.  And last but not least, Quantum Physics buffs will also be amused to find Dark Matter, Multiverses, the Geodetic Effect, and the dimension of Time woven into the storyline.

Everything builds to an exciting, if somewhat predictable, climax.  The good guys win, the bad guys get their just desserts, and civilization is saved.  But there is a way-kewl Epilogue that you’ll not see coming.

Action trumps believability quite often in TEoG, which for me is a drawback.  There are way too many incredible coincidences.  One hero gets himself “magnetic finger implants” right before entering into the fray, for no special reason.  Of course these become key tools in the quest.  Another hero splits from his commander during a firefight, only to end up in just the right spot, with just the right RPG-29  (rocket) launcher in his hands, just in time to save the day.  NSA apparently has the blueprints of every warehouse in Ulan Bator at their fingertips.  And don’t get me started on conveniently-placed crowbars and savior seals.

Excerpts...
“Time is not a linear function,” she continued, almost as if she were working something out in her head.  “Time is just another dimension.  Like up-down or left-right.  The flow of time can also be affected by gravity or by velocity.  So when space-time got ripped or wrinkled, it could have made time skip a beat, like the needle of a record player hitting a scratch in the vinyl.”
The fear in her eyes brightened.
Painter tried to stave off that panic.  “Since when do you kids still listen to vinyl?”  (pg. 59)

“And why this continuing fascination with wolves?” Seichan asked, clearly noting the same.  She stirred and stretched a long leg, baring her ankle.
“They are a good luck symbol here, especially for males.”  He had to clearly pull his gaze from her leg.  “Wolves also represent a lusty overabundant appetite.”
“How so?” Seichan asked, crossing her other leg, keeping the guy distracted.
“A wolf kills more than he can eat.  According to our stories, God told the wolf that he could eat one out of every thousand sheep.  The wolf misheard him.  He ate one out of every thousand sheep he killed.  (pg. 344)

“We’ve done stupider things.”  (pg.  476)
There is a fine-but-definite right-wing bent to Rollins’ books, particularly the Sigma Force ones.  The horrors of the North Korean episode will stoke wing-nut passions, but of course it could have been set anywhere.  However the basic premise here has an even more subtle slant to it.

The end of the world is threatened, and Sigma Force faces incredible odds of beating the 4-day deadline.  Those odds could improve significantly by contacting the Chinese government, since we’ll be traipsing through their backyard.  But hey, then they might gain access to the secrets of our (crashed) satellite, and we can’t allow that.  Small matter that if we don’t “change future history” in the next few hours, there will be no one left alive to give a sh*t about that satellite. Better Dead than Red.

To be fair, Rollins does a much better job of keeping his right-winginess low key than, say, Tom Clancy.  But coupled with the WTF believability issues, this made The Eye of God merely a good read, instead of an excellent one.  Still, “good” is better than “meh”, and Rollins can spin an action-packed story as skillfully as anybody.

8 Stars.  Add one star if you prefer Dirk Pitt to Cotton Malone. And another half-star if you happen to be of the politically right-wing persuasion.
Posted by Hamilcar Barca at 5:59 PM