Ravens in the Storm - Carl Oglesby 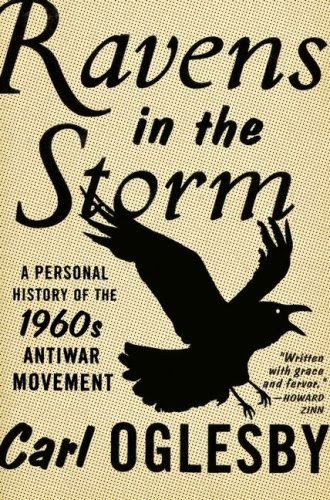 It was the mid-1960’s and the times, they were a-changin’.  Protests were springing up on American college campuses – for Civil Rights, for the War on Poverty, and more-and-more, against the conflict in Vietnam.  At the heart of these demonstrations as a group known as the Students for a Democratic Society, better known by their acronym, SDS.

But Carl Oglesby didn’t care much back then; he was no longer a student.  He had a wife, three kids, and a well-paying job with a Defense Contractor called Bendix.  But then he started researching the war effort (he was a technical writer for Bendix), and he came to a startling conclusion - the USA could never win the war.  SDS got wind of his essay, contacted him, and in a short amount of time, Carl Oglesby found himself elected president of SDS.  He held that position in 1965-66, which saw unprecedented growth in the SDS ranks.

What’s To Like...
Technically, this is an autobiography, and if you want to split hair even furthers, it’s actually Carl Oglesby’s memoirs about his days with SDS.  But since I only read a biography and 2-3 years or so (my last one, from 2011, is reviewed here), we’ll lump them all together and call them biographies.

The book is divided into three sections : Taking Off (How Oglesby and SDS crossed paths); Soaring (the heydays of SDS – protests, sit-ins, and pushback from the authorities); and Crashing (the self-implosion of SDS).  The writing is excellent, which is expected seeing that Oglesby was a writer by trade.  Just like a fiction novel, everything builds to the high-water mark – the Democratic National Convention in Chicago in 1968.  There’s an Index in the back of the book which came in handy as I was reading Ravens in the Storm.

Oglesby presents his years with the SDS, warts and all.  There were intramural squabbles – SDS faction against SDS faction.  There were intermural squabbles – SDS against other similar groups, like PC, LID, SANE, and SNCC.  And of course there was the aggression by governmental departments – FBI, CIA, and the White House – that ranged from surveillance (just assume your phones are tapped and FBI agents have infiltrated SDS) to downright dirty tricks -  "COINTELPRO" – provocateurs, slander, and rumor-mongering.

Oglesby gives some ink to his personal life as all of this was unfolding – the hell his family went through; the angry lectures from his right-wing family elders, etc.  He also devotes some pages to his expulsion from SDS, although curiously, there are no details about how he became ex-president of the SDS several years earlier.

Excerpts...
“We Vietnamese did not make the decisions that brought you here.  We Vietnamese did not divide Vietnam in half and make us go to war against each other.  But for your own sake as well as ours, if you understand nothing else, you must understand this.”  He opened his fingers and looked at us piercingly, speaking one word at a time.  “Any Vietnamese solution to Vietnam’s problems is better than any American solution.  If America refuses to see this, many lives will be lost for nothing.  I cannot say that I know America well.  But I think if you ignore this simple fact, you will lose something in your heart.  You will become something that I think you do not want to be.”  (pg. 72)

I decided at that windblown moment on the beach in the sparkling air and before that frothy, pounding surf and that totally new shoreline that if I could ever choose my own symbol for the movement at its best in the bad time that had just ended, it would be these birds – I will always think of them as Noah’s ravens – because of the way they took to the wind.
Ours was a movement of ravens, say I, a great flocking and soaring to and fro in the big storm of the American sixties.  Sometimes we could really fly.
When we crashed, it was from an enormous height.  (pg. 317)

Sometimes going crazy can seem the only sane thing to do.  (pg.  163)
Ravens in the Storm strongly resonated with me, because I was a freshman at Penn State in 1968.  My politics were different back then – I supported George Wallace for President – but SDS organized a demonstration that resulted in students occupying the President’s office for several days.

Later, at Arizona State, my politics changed, and I took part in demonstrations and saw firsthand the things Oglseby talks about – the squabbling among the various anti-war factions, the threats from drunken wing-nuts, and most importantly, government-planted provocateurs deliberately trying to incite violence.

I still maintain we won the anti-war struggle.  Vietnam became such an unpopular issue that Nixon was forced to end it.  But once that central rallying point disappeared, the protest movement collapsed for lack of a new, giant, unifying issue to focus on.

So it was heartening to see the “Occupy” movement take hold a couple years ago.  And even today, we march for Gay Rights, Immigration Reform, Pro-Choice Rights, and a host of other fixable problems.  RIP, Carl Oglesby.  You laid the groundwork; the struggle continues.  And time has proved you right – violence is not needed to achieve our goals.

9½ Stars.  Highly recommended, but subtract 1½ stars if you have no idea what SDS was, and the Vietnam War was something you read about in History class.
Posted by Hamilcar Barca at 5:00 PM