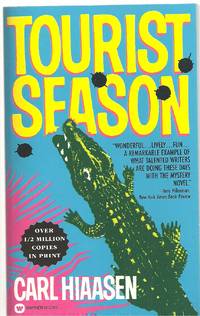 Florida is overcrowded.  Too many tourists and convention-goers come every year, to say nothing of the slew of geezers who have retired here permanently for the year-round sunshine.  Thanks to the Chamber of Commerce, swamps are being drained and artificial islands created, all to lure more visitors.

Someone ought to persuade all the interlopers to stay away or move back north.  The alternative is to simply start killing them off.  Come to think of it, the latter might just bring about the former.

What's To Like...
Tourist Season was published in 1986, 15 years before 9/11, when terrorists could still be portrayed as something other than utterly evil fanatics.  Here, the group is called Las Noches de Diciembre (The Nights of December) and they are inept, committed, funny, and ruthless.

The protagonist is Brian Keyes, a PI who used to be a journalist.  He's got strings to pull at both the newspapers and the Miami PD, and he somehow makes women want to go to bed with him.  Besides trying to stop LNdD, he has to bodyguard Kara Lynn Shivers, this year's Orange Bowl Queen.   Kara's a much stronger character than your stereotypical bikini-beauty-bimbo.

What's really kewl about Tourist Season is the equal treatment Carl Hiaasen gives to both the terrorists and the good guys.  Yes, LNdD are a bunch of psychopathic losers, but at least they have a noble cause.  Kinda.  You might even find yourself pulling for Pavlov, the trained crocodile.  (Do not call him an alligator!).

Kewlest New Word...
Insouciance : having or showing freedom from worries or trouble.

Excerpts...
It was two years ago that Jenna had dumped him for Wiley - Wiley, of all people!  Why couldn't it have been an artist, or a concert musician, or some anorexic-looking poet from the Grove?  Anyone but Skip Wiley - and right in the bitter worst of the Callie Davenport business.  What a couple: Jenna, who adored Godunov and Bergman; and Wiley, who once launched a write-in campaign to get Marilyn Chambers an Oscar.  (pg. 61)

The kennel club bomb actually was a small land mine, a rudimentary imitation claymore, which Jesus Bernal had buried on the second turn of the track.  The greyhound that triggered the mine was a speedy dam named Blistered Sister who went off at 20-to-1.  Literally.  One second there were eight lank dogs churning along the rail, and the next they were airborne, inside-out.  It was a mess.  The blast took out a sixty-foot stretch of racetrack and disrupted betting for hours.  Blistered Sister, whose brindle carcass landed closest to the finish wire, was ruled the winner...   (pgs. 177-78)

"Strangled to death is redundant, doesn't he know that?" (pg. 106)
Tourist Season made me laugh. and that's always a plus.  It was Carl Hiaasen's debut novel, and not surprisingly, it seems a bit uneven.  Some of the deaths are given in gory detail, others are curiously sanitized.  The struggle between the good guys and the bad guys is spotlighted throughout the length of the book, yet the ending itself dangles.

On a deeper level, though, Tourist Season is Carl Hiaasen's commentary on the state of the State of Florida - the urbanization, the eco-wrecking, and the loss of heritage.  In that regard, the book succeeds nicely.  7½ Stars, and Floridans can add another 1½ stars for topicality.
Posted by Hamilcar Barca at 6:22 PM