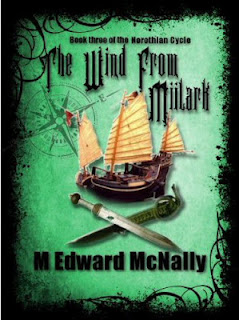 House Deskata is no more; John Deskata has arrived too late to lay claim to its throne.  Not that it would have made much difference, since he was banished from Miilark long ago.  He only came back for his Law Sister, Rhianne.  And to swear an Ukumir - a blood vengeance - against House Lokendah, a rival that profited greatly from the seizing of the Deskata assets.

What's To Like...
The Wind From Miilark introduces several new characters (Rhianne, Yu Pao, Gonderick) and some new species (gnolls, kobolds, a full elf, and 199 Miclantpal).  For a change, there is only one storyline, and its timeline, at least the start of it, parallels that of Book #2.  Basically we find out what John Deskata is up to while the rest of the gang defends Chengdea.

M. Edward McNally "broadens" the world still more, by bringing a number of new nations into the saga.  And I finally have some idea of where the Miilarkian Isles are located - way the heck west of the Norothian Channel, methinks.

For fans of the "old gang", Tilda, Zeb, and Phin show up about halfway through the book, and Brother Heggenauer makes a cameo appearance at the end.  There is enough action sown throughout to keep your attention, which helps when sailing on the boundless main with John and Rhianne.  The ending has a great twist which, in retrospect, I should've seen coming.

Excerpts...
Yu Pao's face clouded.  "What I was actually looking for was something along the lines of a history, but Mr. Beecha'osi's account was far more...narrative."
"That is typical of a Miilarkian travelogue.  They can provide a wealth of information about a land or culture, though it is generally secondary to the telling of a story."
"A story of boundless financial and sexual conquest," Yu Pao said with a neutral inflection that nearly made Rhianne chuckle.
"I am afraid that too is typical of the genre.  Miilarkians rarely travel without a goal in mind."  (loc. 914)

"And you think that this 'return' of Vod'Adia is the sign of something larger on the way.  Would that be a large good thing, or a large bad thing?"
"Have you ever heard of a prophecy that foretold something good?" Tilda asked him.  "It's always plague and pestilence and toads raining from the sky.  There is never a prophecy about the coming of a gentle breeze, or a perfect pair of boots."
"Pair of boots?" Phin asked.
"Apparently it is a female thing, I don't understand it either," Zeb told him.  (loc.3167)

Kindle Details...
I bought The Wind From Miilark for $4.99 at Amazon, the same price as Book 2, Death of a Kingdom.  The first book, The Sable City, is only $2.99, and you really ought to read these in order.

"I had lunch today with the man who is going to kill me,"  (loc. 1995)
For me, TWFM was darker than the first two books, primarily because John's future is quite grim.  House Lokendah is a powerful, energetic, and resourceful enemy.  Cross their path and die.

Nonetheless, there is still ample wit and humor.  Zeb can always be counted on to lighten the mood, and Phinneas seems to attract absurdity.  The reason for his being expelled (literally) from the Great Library is hilarious.  I enjoyed meeting the librarian, even if he isn't an orangutan.

The Wind From Millark has the same structure as the earlier books - steadily-building tension, adventure throughout, and a quest that you might still be trying to discern even when halfway through the book.  Not to worry; it's fun to tag along with our plucky heroes, and once again, the main plotline resolves itself nicely.

Best of all, the final section hints at bigger, better, and badder things to come. Fantasy is nice.  Epic Fantasy is a delight.  8½ Stars.
Posted by Hamilcar Barca at 6:39 PM

Thanks for reading the series, Hamilcar, very happy you are enjoying it. :-)

I'm looking forward to it! The series really has been fun to read.