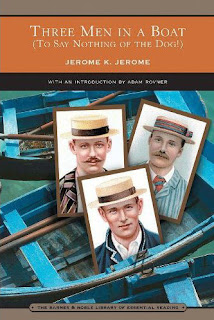 1889; 195 pages. New Author?: Yes. Genre : Classic Lit; Humor. Full Title : Three Men in a Boat (To Say Nothing of the Dog!). Overall Rating : 9*/10.
.
Three chums, convinced that they have every one of 107 maladies save one (the only one they don't have is "Housemaid's Knee"), decide it would be therapeutic to spend a fortnight boating up-then-down the Thames River. A terrier named Montmorency joins them, and misadventures arise.
.
What's To Like...
Despite his contemporary critics sniffing at it for being lowbrow, Three Men In A Boat was an instant hit with the Victorian reading crowd. Jerome K. Jerome (that's his real name) deftly combines (via his narrator) head-scratching (il)-logic, quaint understatement, absurd anecdotes, and the characters' self-delusion into a witty story that still holds up nicely today. Jerome gives some beautiful descriptions of the scenery along the Thames, as well as some of the rich history (such as the signing of the Magna Charta at Runnymede) that took place in the area.
.
There are 19 chapters, each with a helpful outline at its beginning and some awesome drawings that I presume were in the original edition. Jerome offers some delightful discourses; some tongue-in-cheek (such as odiferous cheeses and camping in the rain), others quite wistfully serious (such as the hustle and bustle of the 19th Century and the thrill of sailing on the River). Indeed, at one point he speculates about whether everyday items from his time (specifically, a tacky porcelain dog) will become prized antiques in the year 2000. He was uncannily accurate.
.
There really isn't much action, which disappointed some readers. So the book rests on the quality of the the narrator's tangential stories and pratfalls that befall our hapless hypochondriacs. IMNSHO, Jerome pulls it off wonderfully.
.
Kewl New Words...
Beanfeast : an annual dinner party, given by an employer for his employees. Weir : a low dam across a river to raise its level. Riparian : relating to the banks of a river. Mouch (n) : Freeloading. Here : "...to come and mouch round the lock with their dogs, and flirt, and smoke...". Gramercy : an interjection expressing gratitude. Dosshouse : a cheap lodging; a flophouse. Baccy : tobacco leaves. Bally : euphemistic for "bloody". As in "what a bally/bloody/flaming idiot".
.
Excerpts...
From the dim woods on either bank, Night's ghostly army, the grey shadows, creep out with noiseless tread to chase away the lingering rearguard of the light, and pass, with noiseless, unseen feet, above the waving river-grass, and through the sighing rushes; and Night, upon her sombre throne, folds her black wings above the darkening world, and, from her phantom palace, lit by pale stars, reigns in stillness. (pg. 14-15; an example of Jerome's descriptive talent).
.
In the church is a memorial to Mrs. Sarah Hill, who bequeathed &pound, 1 annually, to be divided at Easter, between two boys and two girls who "have never been undutiful to their parents; who have never been known to swear or to tell untruths, to steal, or to break windows." Fancy giving up all that for five shillings a year! It is not worth it. (pg. 140)
.
It always does seem to me that I am doing more work than I should do. It is not that I object to the work, mind you; I like work: it fascinates me. I can sit and look at it for hours. I love to keep it by me: the idea of getting rid of it nearly breaks my heart.
...
And I am careful of my work, too. Why, some of the work that I have by me now has been in my possession for years and years, and there isn't a finger mark on it. I take great pride in my work; I take it down now and then and dust it. No man keeps his work in a better state of preservation than I do. (pg. 152)
.
He would go out in a November fog and come home with a sunstroke. (pg. 53)
Jerome originally set out to write a serious travelogue about the sights and history of the Thames. Luckily for us, he changed his mind and went the humorous route. His comedy was ground-breaking, and influenced British humorists (such as P.G. Wodehouse and Douglas Adams) for generations to come.
.
TMIAB could stand on that alone. But it also captures the "spark" of the late-Victorian era, and gives us a wonderful look at life in 19th-Century English life : before the age of planes, cars, and MacDonalds. What a literary delight! 9 Stars.
Posted by Hamilcar Barca at 5:34 PM