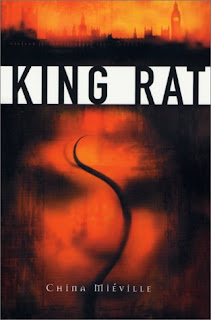 1998; 318 pages. New Author? : No. Genre : Horror Fantasy; and the more generic "New Weird". Awards : Nominated for the Bram Stoker Award, and the International Horror Guild Award. Overall Rating : 8*/10.
.
Saul Garamond's father takes a dive out of the window in his high, top-floor apartment. Inspector Crowley thinks Saul might have given him a push. Saul quickly finds himself cooling his heels in a London jail, while the police continue their investigation. But a strange being, King Rat, shows up and teaches him how to squeeze through the jail door and effect a miraculous escape. Ah, but the adventure is only beginning...
.
What's To Like...
The tension starts quickly (the police are already banging on Saul's door at page 20), and builds throughout the rest of the story. The storyline itself, a strange goth fairy tale, is masterfully done. The relationship between Saul and King Rat is complex and changing. But best of all is Miéville's descriptive skill. When he has finished detailing some seedy part of London, you just want to grab a towel and wipe the soot off your arms.
.
There are a few rough edges. The characters of Inspector Crowley and Loplop (the Bird King) are developed nicely, only to see both of them fizzle into oblivion before the climax. And when Saul saves Loplop from certain death at the hands of the Ultimate Evil, you'd think the method used would give our heroes a clue as to how to win the day. It doesn't.
.
There also are a lot of pages devoted to a music genre called "Drum and Bass"; including a six-page sermon on pages 206-211. I'll grant that D&B is an important part of the story, but I frankly didn't need to be told all the technical minutiae of it.
.
Kewl New Words...
There were Britishisms, Cockney slang, and Miéville's fabulous vocabulary. Whids : slang for a line of malarkey. (I think). Kip : to sleep. Glutinous : sticky, gooey. Crepuscular : dim, like twilight. Entresol : a mezzanine; an intermediate floor in a building. Cynosure : something that provides guidance. Sardonically : sarcastically. Scran : a collection of things to eat. Cagoule : a lightweight parka. Solipsism : the (self-centered) philosophy that the self is all you need to know to exist. Skedge : a lookout (?) Here, "on we trog, slower now, on the skedge for a place to set us down". Cosseting : pampering. Gormenghast : a fictional castle of enormous proportions. Used here in a figurative sense. Darkmans/Lightmans : the dark/the light. Funambulism : walking on a tightrope. Subaltern (adj.) : lower in rank or position. Ineluctably : inescapably. Insouciance : the cheerful feeling you get when nothing is troubling you. Bathetic : effusively or insincerely emotional. Shufti : a quick look around (slang). Fe : slang for ??. I never did figure out exactly what.
.
Excerpts...
He read Lenin's exhortations that the future must be grasped, struggled for, molded, and he knew that his father was trying to explain the world to him. His father wanted to be his vanguard. What paralyzes is fear, his father believed, and what makes fear is ignorance. When we learn, we no longer fear. (pg. 27)
.
"You can't go back, you know." King Rat looked at Saul from under his eyelids. ...
"I know it," he said.
"They think you did your pa, and they'll do you for that. And now you've slung your hook from their old Bucket they'll have your guts for garters." (pg. 53)
.
I'm the one that's always there. I'm the one that sticks. I'm the dispossessed, I'll be back again. I'm why you don't sleep easy in your bed. I'm the one that taught you everything you know, I've got more tricks up my sleeve. I'm the tenacious one, the one that locks my teeth, that won't give up, that won't ever let go.
I'm the survivor.
I'm King Rat. (pg 319; closing sentences)
.
"...let's put the 'rat' back into Fraternity" (pg. 317)
This is a horror story told in comic-book hero style; and it works beautifully. The tale's the thing here, therefore the few technical flaws ought to be winked at. King Rat is a great first-effort by China Miéville, and by all accounts, he gets even better in stories like Perdido Street Station and The Scar (neither of which I've yet read), and Un Lun Dun (which I have). Eight Stars.
Posted by Hamilcar Barca at 7:22 PM

I like the sound of this author's name. Kewl. :)
Also, I think Loplop's nickname The Bird King is quite regal. Lots of interesting names in this book it seems.

he's a gifted author, and this isn't even considered to be one of his best works.

i highly recommend his "Un Lun Dun" book. it's much more "accessible" to first-time readers than King Rat.