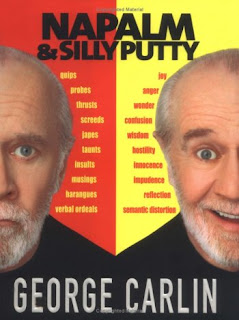 2001; 269 pages. According to the cover, it's a "#1 New York Times Bestseller". Genre : Humor. Overall Rating : C.
.
A collection of short pieces by Carlin, and for the most part (ANAICT) taken from his past stand-up routines. It is better organized than its sequel, When Will Jesus Bring The Pork Chops?, which is reviewed here.
.
What's To Like...
The tone of N&SP is lighter than that of WWJBTPC. More importantly, it's funnier too. The best parts are once again the one-liners, dubbed "Short Takes". Some of the longer routines, such as the "Food" one (pg. 132), will make you laugh. Others, such as the one about "Time" (pg. 163) are both funny and thought-provoking.
.
Alas, as with WWJBTPC, a lot of the stuff here is shock comedy. Carlin wants to show you that he can be witty about anything, including topics like rape and OJ Simpson. He wants you to know all the things that p*ss him off, which families he loathes, and why all kids are ugly. There's also a not-so-funny interview with Jesus. Some of N&SP works. Some of it doesn't.
.
New/Cool Words...
George Carlin is not a good resource for expanding your vocabulary. The only N/C word was : Zeitgeist - the spirit of an age; the spirit of the times.
.
Excerpts...
People who say they don't care what people think are usually desperate to have people think they don't care what people think. (pg. 9)
.
I hope no one asks me to show them the ropes. I have no idea where they are. Maybe I could pull a few strings and find out. (pg. 189)
.
(re airplane announcements) "Place the mask over your face and breathe normally." Well, no problem there. I always breathe normally when I'm in an uncontrolled 600-mile-per-hour vertical dive. I also sh*t normally. Directly into my pants. (pg. 15)
.
Good, funny, occasionally smart, but essentially drivel...
That's a snippet out of the "Acknowledgements" section of the book, and probably a good, honest 7-word summation of it. N&SP tapdances the whole way between funny and crude. I have a feeling this is one of those rare books where it's better to listen to it as an audiobook (which I believe he narrates himself) than to read it. George Carlin was a talented stand-up comedian, and an absolute master of timing, wordplay, and inflections. All of that is lost here.
.
We'll give this a "C", because it's better than WWJBTPC, which earmed a "D+". Read it only if you don't have access to his albums, DVD's, and/or audiobooks.
Posted by Hamilcar Barca at 1:03 PM

That's kind of how I feel about most Carlin stuff - that sometimes it's funny and sometimes it feels overly shock-value. I can take him in small doses. I have a lot of respect for him, but i don't think I want to read a whole book, you know?

i agree. there's a third book of his out there - Brain Droppings - that supposedly is the best of the three. but i have no desire to read it.