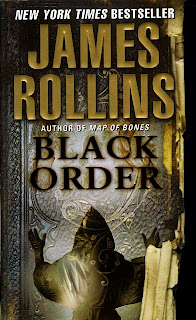 2006; 506 pages. #3 in the "Sigma Force" series. Author's real name : Jim Czajkowski. Genre : Action, Adventure. Overall Rating : "B".
,
At a monastery in Nepal, the lamas go beserk - killing and eating each other, and drawing weird signs on the walls with their blood. In Copenhagen, Denmark, someone wants an old Bible enough to burn down a bookstore and kill the proprietor. In South Africa, a mythical man-eating beast (a ukufa) seems to be prowling a game preserve, and munching on little old ladies. The prologue is set in the closing days of WW2 Poland, where we find Nazi scientists trying to destroy their secret research project before the Russian forces overrun them.
.
How do all these storylines connect, and who or what is the Black Order? That's what Sigma Force wants to know.
.
What's To Like...
There's non-stop action and the characters are interesting. The Cri-Fi puzzles are believable and there are some "gray" bad guys (is that an oxymoron?). The Sigma Force folks are kind of a combination scientists and spec-ops agents. How cool is that? And because the storyline follows a team of protagonists (instead of just a single hero), there is bad-a$$ action happening in several places simultaneously.
.
At times, the good guys and their exploits can stray just a bit too close to being a Dirk Pitt knock-off. And after 450 pages of constant chases, fighting, mystery, and escapes; the ultimate resolution kind of staggers to a finish.
.
Kewl/New Words...
Provenance : a history of the ownership of something. Etiology : in a medical sense, the study of causes. Paroxysmal : accompanied by a sudden outburst of emotion or actions. In this case, it was shivering.
.
Excerpt...
"A bit of the old bait and switch. Took me all day to find a Bible the right size and shape. Course I had to tinker with it a bit afterward. But then all it took was lots of tears and shouting, a bit of fumbling..." She shrugged. "And Bob's your uncle, it was done." (pg. 153). What can I say - I love the phrase "and Bob's your uncle".
.
And take a little off the top...
This was my first James Rollins book. The heroes, especially their against-all-odds escapes were at times a bit too over-the-top for me. But that's a personal opinion only. The style reminded me of a cross between Steve Berry (who I like) and Clive Cussler (who I find to be so-so). If you like both those authors, you'll probably find Black Order to be great.
.
Ditto for the climax, where they're trying to find a cure for what ails one of the heroes. I found it a letdown; you might not. Overall, this was a page-turning book that kept my interest until the very end. We'll give it a "B" and endeavor to see how other books by Rollins compare to this.
Posted by Hamilcar Barca at 12:23 PM

And bob's your uncle - that is awesome! My dad's a big Cussler fan and I wonder if he'd like Rollins. Sounds sortof like a Dan Brown plot.

And I knew what etiology was and am now oozing with pride because of it. hee hee

the action takes precedence over the puzzle-solving in Black Order. So i think Cussler fans will like the book more than DaVinci Code fans. but that's just a guess.

"provenance" and "paroxysmal" are words i've seen before, but keep forgetting what they mean. i'm hoping including them in the review will help me remember them.

"etiology" was a totally new one for me.