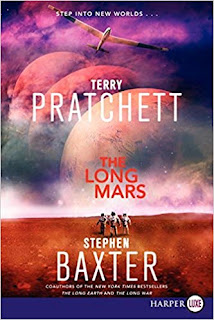 You and I would call them “Multiverses”, but in the near future (2040 AD or so), when humans first learn how to transverse them (which they call “stepping”), the preferred term is “the Long Earth”.  Each parallel world is different, often only marginally so, but you are always in the same geographic spot.  If you "step" from Oshkosh, by gosh, you still end up in the same geographical spot on the neighboring "Earth".

Oshkosh may or may not be there, of course, depending on how the timeline played out in that particular dimension.  So here’s a handy tip:  Don’t ever go stepping from the basement of a house.  In the next Earth, you may find yourself ten feet underground, buried alive.

Just how many multiverses are there?  No one knows, but earlier “stepping voyages” have made it across millions of Earths.  Perhaps the answer is “infinite”.  Or maybe we should say “double infinity”, since you “step the other direction” and return through the worlds you came from.

Now there is a new revelation.  If you journey to Mars (in a few select multiverses) and “step” away from there, you come across what appears to be a whole new set of multiverses, based on the timelines of Mars, not Earth.  And it’s pretty obvious what we should call that phenomenon.

What’s To Like...
There are three main storylines in The Long Mars, each one getting about equal time.  1.) Captain Maggie Kauffman heads a two-ship expedition across the Long Earth determined to set a new record for the number of multiverses in one direction.  There are whispers that some of her passengers have ulterior motives for making the journey, but no one has any details.  2.) Sally Linsay and two others start the inaugural voyage across the Long Mars, and it's anybody's guess what to expect on that trip.  3.) Joshua befriends a precocious-but-troubled youth named Paul Spencer Wagner to try to figure out why he’s so extraordinarily bright.

I thought the writing was well done, which you’d expect from Terry Pratchett and Stephen Baxter.  The story takes place mainly in the US, which is impressive given that both authors are British.  The story is written in English, not American, so your flashlight is called a torch, your grey and ageing plough might be made of aluminium, and you have tyres on your car.

I liked the nods given to other writrs of science fiction and fantasy, including Tolkien, Niven, Clarke, Asimov, and Herbert.  There was an obscure (for me) nod given to one Chesley Bonestell, which I had to look up in Wikipedia to understand.  The Russian cosmonaut Yuri Gagarin, also gets a nod, and I smiled when some Dune-esque sandworms appeared.

The emphasis here is on “Hard Science Fiction”, and I think the aim of the authors was to give some idea of what it might be like if we ever did discover how to explore multiverses.  The inclusion of the “beanstalk” apparatus was a nice touch in this regard.  There is a minor story thread concerning rejuvenation, which I’m hoping will be followed up on later in this series.  And the brief mention of canisters of sulfur dioxide and hydrogen sulfide gave me a chuckle; I’ve worked with them both in my career.; they make thiosulfates.

There are lots of space beasties to meet and avoid being eaten by.  The trolls, elves, kobolds, and “First Person Singular” are all from the previous two books; now we get to deal with talking cats, beagles, sentient crustaceans, and “the Next”.  And thanks to multiverses, we learn that the Plural of Mars is “Marses”.

Kewlest New Word. . .
Extirpation (n.) : the act of totally destroying or killing off of something.

They weren’t like ordinary kids in the way that the nearest of them immediately rounded on Joshua when he stepped in with Paul, all armed with bronze knives, and a couple further out with raised crossbows.
“It’s OK,” Paul said, hands held high.  He squirted out some of the high-speed babble.
Joshua was still subject to suspicious stares, but the knives were lowered. (…)
“What did you say to them?”
“That you’re a dim-bulb.  No offence, Joshua, but that was obvious to them already.  Just from the way you looked around, with your jaw slack.  Like you showed up dragging your knuckles, you know?”
“A dim-bulb?”  (pg. 261)

“You look as blank as a chimp faced with a banana fitted with a zip.”  (pg. 212 )
Sadly, the disappointments I encountered in the previous book in this series, The Long War, reviewed here, continue in The Long Mars.  There is no advancement of the overall plot of this series, whatever that might be.   Even worse, the story is almost devoid of any action, a sci-fi requisite.  Here’s a list of every bit of excitement (without spoilers) over the course of the book:

a.) one gunshot is fired, but it's of no consequence,
b.) the survivors of a wrecked spaceship are found, with minimal intrigue ensuing.
c.) a being dies, onscreen no less, but it has no consequence on subsequent events,
d.) there’s a jailbreak, but it happens off-screen and we aren’t given the details.

That’s it.  The rest of the book is predominantly character interaction and world(s)-building.

The ending is mediocre at best.  The three storylines are hastily tied together, but nothing gets resolved.  Things close with Maggie listening to a scholarly debate about the plusses and minuses of extirpation.  Yawn.  Overall, it felt like the only purpose for The Long Mars is to set up events in the sequel.  At least I hope it does that.

One last disappointment: The Chinese depicted in the book are markedly stereotyped. They're uncooperative with Maggie and her crew, only give vital food shipments for a starving Earth if attached political strings are complied with, and should first and foremost be remembered for their  repression of Tibet.  It would've been nice if some of them were a bit "gray" in character.

4½ Stars.  I’m beginning to think this is one literary collaboration that just didn’t work out well.  The Pratchett wit is completely missing here, along with any semblance of a story.  Maybe each author was afraid to mess up whatever plotline the other was planning.  Two books remain in this 5-book series, and there's no doubt that I’ll read them.  But I no longer expect much out of this series.
Posted by Hamilcar Barca at 2:24 PM