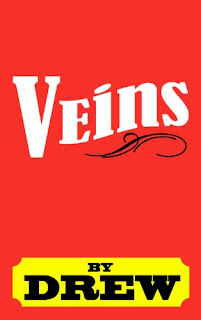 It’s the beginning of his freshman year in high school, and he just wants to be called by a cool nickname.

His first name is Michael and for some reason he doesn’t like the sound of both Michael and Mike.  His initials are M.R., but that’s not any better.  What he’d really like people to call him is Dude, which is very cool.  But fat chance of any other students, especially upperclassmen, calling a freshman that.

But sometimes Fate can be a fickle thing.  When the school pictures are taken in that freshman year, there’s something in his portrait that really sticks out.  Everybody notices it.  His veins.

So that’s the nickname that everyone now calls him by.  Veins.  Even his high school teachers start to call him that, so he’s stuck with it.  For a short time, it gets replaced by Tinkles, but that’s even worse, and there’s a story behind that.  Oh well.  What’s the worst that can happen?

Well, somebody can write a book about you, and use “Veins” as the title.

What’s To Like...
The author of Veins is the single-named “Drew”, who is perhaps better known as the guy who creates the two fabulous cartoon strips, Married To The Sea and Toothpaste For Dinner.  If you’ve never heard of these, google them and get a taste of Drew’s wacky sense of humor, which manifests itself in this book..

The book is written in the first-person POV (Veins’), and recounts our protagonist’s high school travails, plus the years following his dropping out of school, where he is introduced to the world of mind-numbingly menial and low-paying jobs.

I liked the book’s structure. There are 93 "chapters", but they’re really vignettes, each covering some sad episode in Veins’ life.  The book is only 147 pages long, which means these incidents average out to being 1-2 pages in length.  This is an incredibly fast and easy read, so if you need to read something and do a book report on it by tomorrow, and you haven't even started, Veins is your saving grace.

The story is mostly set in the 1980’s, and abounds in cultural references to that era, such as snap bracelets, Ponderosa cafeterias, and Renaissance festivals.  I could relate to taking the SAT tests and the “career placement” tests, and I’m sad that my high school had no chess club back then.  Both Veins and I stole forks from restaurants, sweated through employment drug tests, and thrilled to the mishaps of amateurs setting off fireworks inexpertly.

There are some R-rated portions of the book, including Veins’ first and second sexual encounters, both of which freaked him out.  Veins also likes to smoke pot, and all I can say is, judging from his highs, the stuff he smoked must’ve been considerably more powerful than what we had in the early 70’s.

The book closes with the high point (low point, actually) in Veins’ life at the time, which we shall simply call “the Wendy’s incident”.  You can read all about it in the book.

Excerpts...
We started moving the chess around and he kept telling me “You can’t do that” when it was my turn.  But that’s not how I look at life.  Everyone has their own chess, and they can move their own color how they want.
The teacher came over after the other guy was complaining, and he touched my shoulder and said “Veins, each one can only move a certain way.”  I told him it sounded like Russia to me, because in communism they tell you what your job is, and that’s all you can do.  (loc. 65)

I started to get tired after about 10 minutes, and I didn’t see anyone.  I took a rest on a log and started looking at the hiking magazine.  I didn’t realize until I tried to hike, but hiking is just walking, except they try to sell you expensive shoes, and a walking stick, and a hiking hat.  That’s like if you said swimming was called Watering, and you made people buy an inner tube that was $150, and you made them subscribe to Watering Monthly, and told them the best oceans to go in.  (loc. 945)

Kindle Details...
Veins presently sells for $4.99 at Amazon.  It is not part of a series.  Drew offers two other e-books, one for each of his comic strips, Married to the Sea and Toothpaste for Dinner.  The former is priced at $14.99; the latter goes for $2.99.  Being a one-name author really mucks up the Amazon search engine.

Sandpaper is like life.  If it wasn’t rough, it wouldn’t be worth anything.  (loc. 338)
My main quibble with Veins is the protagonist himself.  He’s self-centered, obnoxious, and a master at rationalizing that nothing is ever his fault.  He reminds me a lot of John Kennedy Toole’s Ignatius J. Reilly in A Confederacy of Dunces, reviewed here.  But Ignatius had a modicum of charm about him; Veins doesn’t.

Also, while the storyline is entertaining throughout (which tells you a lot about Drew’s writing talents), there’s no character growth.  Veins is a clueless ne’er-do-well loser when the book starts, and he hasn’t changed one bit by the book’s end.

Still, I enjoyed reading Veins, if only because it reminded me that my high school days, which were filled with teenage angst.  I was heartened by the fact that, overall, my experiences were noticeably less traumatic than what Veins went through.

5½ Stars.  One piece of trivia to close this review.  I suspect that the complete title/author combination here, Veins/Drew, has got to be the shortest entry in Amazon’s vast library of e-books.  Nine letters.  If there's a shorter one, I can't think of it.
Posted by Hamilcar Barca at 11:21 AM