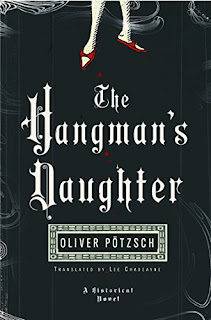 Poor little 12-year-old Peter Grimmer is dead.  It looks like he drowned in the river, but perhaps it wasn’t an accident.  Say, didn’t he hang out with those orphan kids down at that midwife’s house?  I never liked her anyway, so maybe she killed him.  And she uses strange herbs to heal people, so I bet she’s a witch.  Yeah, that’s why she killed little Peter.  Witchcraft is afoot!

Let's lock her up and call for the Hangman.  We can’t burn her at the stake until she confesses, and torture is part of the Hangman’s job.

But what if she’s innocent?

Really, it’s better that the midwife confesses quickly and is burned at the stake immediately thereafter.  Otherwise the town will work itself into a witch-hunting frenzy, and all sorts fingers will get pointed at all sorts of townspeople.  And who knows how many innocent people will die then?

So, Hangman, your job isn’t to determine whether or not she’s a witch.  Your job is to get a confession out of her, the sooner the better.

What’s To Like...
The Hangman’s Daughter is a pleasant combination of historical fiction and murder-mystery.  The setting is a small (and real) town in southern Germany ("Bavaria", back then) called Schongau in the 1600’s, when witch-hunting was rife in both Europe and the colonies in America.  I’ve always wondered how such craziness could flourish, and Oliver Potzsch certainly presents a plausible mindset for it.

The historical aspect – life in Bavaria in medieval times – is well done.  The descriptions set the scene nicely, and we learn about things like dwarfs' holes, what the people ate, and the various roles a hangman had to assume to earn his keep.  It’s also enlightening to compare modern medicine with what was practiced in the 17th century.  Finally, in a time of high mortality rates during childbirth, the issue of what to do with the town’s orphans is examined at length.

The murder-mystery is also handled deftly.  This isn’t so much a whodunit, as it is a “why done it”.  There are lots of questions to probe beyond why someone's started killing kids.  Who burned down the stadel, and why?  Why does someone think there’s something valuable buried on the lot where the leper house is being built?  And why do all the victims have a witch’s mark tattooed on their shoulders?  Hey, maybe there really was witchcraft involved!

There’s a handy Cast of Characters at the beginning.  Bookmark it, you will be using it more than once.  There’s lots of action, and some torture, adult language, and assault.  There are some way-kewl illustrations, done in black, white, and red, but on the Kindle they are very small in size.

The three main characters – the hangman, his daughter, and the young physician – are all developed nicely.  I didn’t realize this was part of a series when I picked it up, and if this trio of protagonists becomes a sleuthing team in the books that follow, then count me in for reading more of them.

Excerpts...
Though autumn had already come, the sun was shining brightly on that part of Bavaria they call the Pfaffenwinkel – the priests’ corner – and merry noise and laughter could be heard from the town.  Drums rumbled, cymbals clanged, and somewhere a fiddle was playing. The aroma of deep-fried doughnuts and roasted meat drifted down to the foul-smelling tanners’ quarter.  Yes, it was going to be a lovely execution.  (loc. 99)

The hangman looked angrily across to Simon.  “Did you tell?”
The physician held up his hands trying to calm him down.  “I never!  I only told her about poor Johannes … and that you had examined the fingernails very closely.”
“You idiot!  You must not tell women anything, above all my daughter.  She’s too good at reading between the lines and figuring things out.”  (loc. 3660)

Kindle Details...
The Hangman’s Daughter presently sells for $4.99 at Amazon right now.  The other four books in the series all also see for $4.99.  Oliver Potzsch has another half-dozen or so novels for the Kindle, ranging in price from $3.99 to $14.99.

“A rumor is like smoke.  It will spread, it will seep through closed doors and latched shutters, and, in the end the whole town will smell of it.”  (loc. 861)
The ending is a mixed bag.  The tension builds steadily to the final confrontation, but then we miss out of actually getting to watch/read about it.  The Hangman emerges victorious, of course, but his adversary was no slouch, and I was mildly disappointed in only hearing about their last encounter secondhand.  Also, the resolution of the various mysteries is not particularly twisty.  But I suppose from a historical standpoint, that’s a logical outcome.

OTOH, the epilogue is excellent, and the Author’s Note (Oliver Potzsch calls it “A Kind of Postscript”) is most enlightening.  In the 1600’s, most careers were hereditary, and the author apparently has a number of hangmen in his family tree.

Lastly, mention should be made of the translating.  Oliver Potzsch’s native tongue is German, and I thought Lee Chadeayne succeeded nicely at putting the “feel” of the writing into English.

8½ Stars.  The Hangman’s Daughter was a treat – both as Historical Fiction and as a Murder-Mystery.  It’s always nice when a book with multiple genres does them all well.
Posted by Hamilcar Barca at 1:08 PM