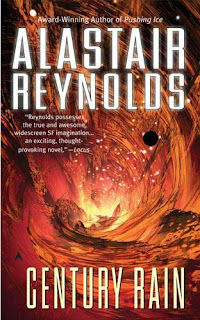 Paris, 2266 AD.  In a setting devoid of any life, archaeologist Verity Auger leads a team looking for priceless relics from a bygone age: a page from a newspaper, a piece of a map, or perhaps even a bit of printed matter ripped from an ancient (21st century) book.

Risks are inherent in the toxic environment.  But when one of her underlings nearly dies in an ill-advised mishap, Verity finds herself facing a trial where, if she’s lucky, all she’ll lose is her job and career.

Paris, 1959 AD.  Private detective Wendell Floyd (call him “Floyd”) and his partner André Custine are asked to investigate the death of an American tourist named Susan White (from Dakota) who died after a 5-story fall from her apartment balcony.  The police call it an accident.  But maybe she was pushed.  Or maybe the balcony railing was defective.

Well, since the person wanting to hire them is the landlord of the apartment, let’s hope that that last scenario is not the cause.

But the space-time continuum can be a quirky thing.  The paths of Floyd and Verity are about to cross, with confusion running amok since they have different agendas for resolving the mystery of Susan White’s demise.

And of course, it doesn’t help that someone’s trying to kill both of them.

What’s To Like...
Alastair Reynolds is a top-tier “Hard” Science Fiction writer, and Century Rain is clever blending of Murder-Mystery with his forte genre.  There’s even a bit of Romance in the story, but don’t worry, this is first and foremost a Sci-Fi tale.  It takes a while for Verity and Floyd to meet up, and until then the storyline flips between the two perspectives.  There’s also a kewl mystery that involves trying to figure out why someone wanted three giant, precisely-fabricated aluminum spheres set up – one in Berlin, one in Paris, and the third in Milan.

You’ll run across a slew of acronyms and catchphrases.  The former includes ones like “UR” (Universal Restorative). “USNE” (The United States of Near Earth), and my favorite, “ALS” (Anomalous Large Structure).  The latter includes The Forgetting, The Nanocaust, Silver Rain, Neotenic Infantry, and the fascinating “Amusica Virus”.  Reynolds usually defines each of these when he introduces them, but jot them down anyway, because he expects you to remember what they mean when they pop up again 50 pages later.

I thought the world-building was fantastic and delightfully detailed.  The 23rd-century solar system is divided into warring factions: the Slashers and the Threshers, and it is also obvious that some vastly technologically superior beings were here many millennia in the past.  You’ll enjoy the “language app”, a nanobotic way to instantly learn a new language, although it degrades with time (a tip of the hat to Flowers For Algernon?).  And you’ll discover what Guy de Maupassant thought of the Eiffel Tower, and how he expressed his feelings about it.

The book is written in “English”, not “American”, and I always enjoy that.  Cuss words are common in the dialogue, as would be expected in the real world.  As with any Hard Sci-Fi novel, Alastair Reynolds spends a lot of time explaining the Quantum Physics of the 23rd-century cosmos.  I found it mesmerizing, but if you find technical tangents tedious, a book in the  Space Opera subgenre may suit your fancy better.

It won’t take you long to notice some anomalies in the 1959 Paris, so it’s not a spoiler to say this is also an Alternate History tale.  Yet all the genres fit together nicely for an epic story.  This is a standalone novel, and is not set in Reynolds’ signature Revelation Space cosmos.

Excerpts...
“The moons offer the perfect strategic platform for defending the planet against Slasher incursions.  Given the existing security measures already in place, they’re also a perfect venue for conducting any sensitive business that might come our way.”
“Do I count as sensitive business?”
“No, Auger.  You count as a pain in the ass.  If there’s one thing I hate more than civilians, it’s having to be nice to them.”
“You mean this is you being nice?”  (pg. 114)

”According to the late Mr. Blanchard, and judging by what I saw when he let me into her room, your sister had a mania for collecting things.  Her room was a holding area for huge numbers of books, magazines and newspapers, maps and telephone directories.  It looked as if she collected just about anything she could get her hands on.”  Floyd waited a beat.  “Pretty odd behavior for a tourist.”
"She liked souvenirs.”
“By the ton?”  (pg. 313)

“(Y)ou don’t know a wormhole from your butthole.”  (pg. 429)
The ending is good but not complete.  The main plotline issue – why did someone kill Susan White? – is answered nicely (the “whodunit” aspect is resolved fairly early), but several threads are left dangling.  The Verity/Floyd relationship is not over, Custine still has the cops on his tail, and the Slashers and Threshers have an uneasy truce at best, all of which is surely good fodder for several more books’ worth of thrills and spills.

Alas, per Wikipedia, this is a one-off novel, and Alastair Reynolds has stated that there will be no sequel.  So the Furies, the Censor, and the Hyperweb will not be explored any deeper, and the other loose threads will not be tied up.

I, for one, am disappointed, since I thoroughly enjoyed Century Rain.

8½ Stars.  Subtract 1 star if you prefer the “Science” in Science Fiction to be downplayed.  Add 1 star if Alastair Reynolds changes his mind and pens a sequel.
Posted by Hamilcar Barca at 5:58 PM