The Girl In The Spider's Web - David Lagercrantz 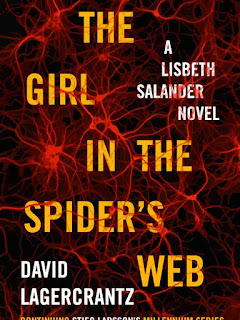 Frans Balder is turning his life around.  Once a deadbeat father, he’s now determined to give his son, August, a stable life.  It won’t be easy; August is an autistic child.  And it will be a full-time undertaking, so he quits his lucrative job at Solifon.  But anything is better than leaving his son with his ex-wife and her has-been movie-star boyfriend.

Ah, but Frans’ work at Solifon was both confidential and ground-breaking.  And his ex-employers have a sneaking suspicion that when he walked away, he took some of his top-secret notes along with him.

Those notes are worth retrieving, no matter what the cost.  They might even be worth killing for.

What’s To Like...
The Girl In The Spider’s Web is the long-awaited fourth book in the Lisbeth Salander “Millennium” series, and the next installment after the initial trilogy finished up in 2010.  Stieg Larsson is dead, of course, but David Lagercrantz does an admirable job of taking over the authorship.

The storyline is complex.  Mikael Blomkvist is trying to revitalize his career by finding something riveting to investigate.  The NSA’s computers are hacked (wanna guess who did it?) and they’re not going to rest until they find the perp and figure out how the hacking was done.  Frans is caring for his autistic son, and the Millennium magazine is trying to figure out if their takeover by Serner is a good thing or a bad thing.  And last but not least, there’s a second hackers' group called the Spiders, hence the title of the book.

There’s a Cast of Continuing Characters at the front of the book in case this is your first Lisbeth Salander book, or if you’ve forgotten who’s who in the last five years.  It’s actually been 4 years since I read Book 3, so this was a handy resource.  Lagercrantz also spends a lot of time filling in the backstory, which is necessary, but slows down the storytelling somewhat.

Autism is examined in depth, and I found that enlightening, although it is used in the usual clichéd way.  The (translation of) the book is written in sort of a blend of “English” and “American”, and I was amazed to find a couple of typos - “wonting to know” and “empty reads” (empty roads) – that made me feel that the editor just loafed on the job by running the manuscript through Spellchecker.

All the characters – new and continuing – are developed thoroughly.  I especially liked the treatment of Ed The Ned and Camilla.  The tension builds steadily to a good, but somewhat hurried ending.  The storyline stops at a logical place, and also sets up the next book in the series.  As with the first book in the initial trilogy, the UE lives to fight another day.  Nevertheless, this is a standalone novel, and the last few pages are a way-kewl epilogue of sorts, letting you know what happens next to the various characters.

“You think you’re pretty tough, don’t you?” he said.
“I don’t like surprise visits.”
“I don’t like people who break into my sytem, so we’re square.  Maybe you’d like to know how I found you?”
“I couldn’t care less.”
“It was via your company in Gibraltar.  Not too smart to call it Wasp Enterprises.”
“Apparently not.”
“For a smart girl, you make a lot of mistakes.”
“For a clever boy, you work for a pretty rotten organization.”  (pg. 385)

“How come all lunatics and murderers are religious these days?”  (loc. 450)
The Girl In The Spider’s Web is a decent, but not spectacular continuation of the Larsson's series.  When I made it to about page 100, I realized that there had been almost zero thrills and spills, and that Lisbeth, who's the main reason we all read these books, had gotten hardly any ink at all.  But looking at my reviews of the first three books, I was surprised to see that this was true of all the Larsson-penned books as well.  Being able to deftly copy the first author’s style is a worthy goal, but it's not always a good thing.

Also, as mentioned earlier, the main storyline could’ve ended better.  After raising the tension to page-turning heights, we are left with a telephoto view of the climactic ending, which for me fell somewhat flat.

But don’t let the negatives stop you from picking up this book.  If you make it to page 100, all hell breaks loose, and it's non-stop action from there to the final page.  Most Salanderholics will be happy they read it.  It’s not perfect, but frankly, neither were Larsson’s offerings.

8 Stars.  Add 1 star if you liked Larsson’s habit of slowly setting the scene before unleashing the excitement.
Posted by Hamilcar Barca at 5:46 PM