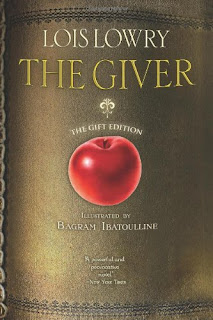 It’s an exciting time for 11-year-old Jonas.  The “Ceremony of Twelve” is coming up, when he and all the other Elevens will be assigned their lifelong careers.  Most Elevens have at least some idea of what career they will be assigned.  The Elders of The Community give this a lot of thought, and Jonas has no doubt that they’ll pick the correct one for him.

But although he’s spent a lot of time musing about it (and what Eleven doesn’t?), Jonas has no idea about The Elders will choose for him.  Hopefully the Elders don’t know about a couple weird vision issues he’s had lately.  Anything that deviates from Sameness is frowned upon.

Ah, Jonas.  You have a lot to learn.  Very little escapes the attention of the Elders.  And there are some community positions that are filled only on rare occasions.  Such as one they call The Receiver.

What’s To Like...
The Giver is dystopian literature in its purest sense – the powers that be really are trying to build a utopian society, and have taken extensive steps to create a world without strife, pain, prejudice, hunger, poverty, rudeness, and injustice.  To their credit, they’ve been largely successful, but, as in any dystopian novel, there is a price to be paid by the citizenry, and here it is being closely monitored and obeying a myriad of rules, all enforced by the carrot-and-stick application of “Sameness” and “Release”.

The main theme of the book is an oft-asked classic question in this genre: does a person have the right to make choices, even if some of them turn out to be wrong?  The natural answer is always “yes”, but Lois Lowry probes deeply into the consequent ramifications.  How does this impact the Communal Ideal of sameness and predictability, and whose welfare takes precedence – the Individual or the Community?

The storytelling is powerful – you’ll bond with both Jonas and The Giver, yet Lowry manages to do this in a “YA” easy-to-read writing style, and a relatively short book.  This particular edition also came with some way-kewl illustrations, which was a nice touch.

The ending is either brilliant or disappointing, depending on how much resolution you expect in dystopian fiction.  I thought it was very good.  If included in your edition (here, it was the book’s final chapter), be sure to read Lowry’s acceptance speech from winning the Newbery Award.  Her talks are every bit a thought-provoking as her writing.

The quibbles are few.  Some of the technical issues are unresolved.  The significance of having pale eyes was never explained, and I couldn’t help but wonder how they controlled the climate and manipulated colors.  But let’s remember the target audience was YA’s, not science geeks like me.

Kindle Details...
The “vanilla” version of The Giver sells for $6.99 at Amazon, with the other three books in the series all in the $3.99-$5.99 range.  The “illustrated” version, which is what I read, sells for $11.49, which seems pretty steep for just a couple pictures added in.  But this is a very popular book, so if your local library offers e-books, you might look there first.

Excerpts...
“There are good things each year,” Jonas reminded her.  “This year you get to start your volunteer hours.  And remember last year, when you became a Seven, you were so happy to get your front-buttoned jacket?”
The little girl nodded and looked down at herself, at the jacket with its row of large buttons that designated her as a Seven.  Fours, Fives, and Sixes all wore jackets that fastened down the back so that they would have to help each other dress and would learn interdependence. (loc. 473)

“Why don’t we have snow, and sleds, and hills?” he asked.  “And when did we, in the past?  Did my parents have sleds when they were young?  Did you?”
The old man shrugged and gave a short laugh.  “No,” he told Jonas.  “It’s a very distant memory.”
(. . .)
“But what happened to those things?  Snow, and the rest of it?”
“Climate Control.  Snow made growing food difficult, limited the agricultural periods.  And unpredictable weather made transportation almost impossible at times.  It wasn’t a practical thing, so it became obsolete when we went to Sameness.”  (loc. 937)

“Fun doesn’t end when you become Twelve.”  (loc. 240)
Like A Wrinkle In Time (reviewed here), I was interested in reading The Giver because it is both a highly-acclaimed, award-winning YA novel and a book that is always in the “most frequently requested to be removed from libraries” lists.  Unsurprisingly, the rationale for banning both books is remarkably inane.  Apparently, there are parents out there who live in mortal fear that their dear little kiddies might be encouraged to think for themselves and arrive at their own conclusions.

Most of the plotlines are not resolved, and Lois Lowry has indicated this was deliberate.  In the years since 1994, she’s penned another three books set in the same world, but my impression is they involve new characters, and we never will learn the rest of Jonas’ story.

I’m okay with that; I can’t think of any dystopian novel where all the woes are cured and life becomes all peaches and cream thereafter.  My local digital library has the other three books, but I may or may not get around to reading them.

9½ Stars.  I found The Giver to be a masterpiece of YA literature, fully deserving of the many awards it has garnered.  I recommend it highly for young adults and older persons alike.  Read it and then tell me what sensible reason can be given for wanting to ban this book.
Posted by Hamilcar Barca at 6:02 PM