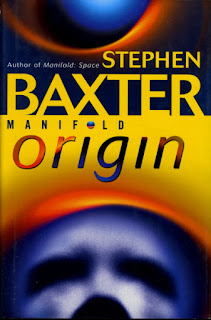 It all happened in a flash.  A blue flash to be exact.  One moment, Emma Stoney is in a T-38 jet with Reid Malenfant, flying towards a reported UFO sighting over Africa.   But this is not your everyday flying saucer UFO, it’s a huge blue ring, many miles in diameter.  And when it puts the T-38 in danger of crashing. Malenfant wisely hits the button to Emma’s emergency ejector seat.  Whoosh!  Out she goes.

But things rapidly go awry, and instead of being parachuted to safety, Emma finds herself sucked into the blue ring.  Into a new place.  Maybe into a different time.  Perhaps into a different dimension.  But the air is breathable, and there even are other humans in this strange new planet.  Well, not humans, exactly; more like cavemen.  Kinda.

But the weird thing is – they speak a few words of pidgin English.  Jeez, who the heck would’ve taught them that?

What’s To Like...
Manifold: Origin is the final book in Stephen Baxter’s “Manifold” trilogy.  Whereas the first two (reviewed here and here) deal with the Time and Space aspects of Quantum Physics, this book focuses on the fascinating concept of Multiverses.  Baxter spotlights one of the popular Multiverse theories – that whenever a key event occurs in our world, the universe splits off into one or more possibilities.  Since there are many crucial events (such as a comet crashing into the Earth and obliterating the dinosaurs), you end up with infinite universes.

In Manifold: Origin, the multiverses occur along Earth’s timeline, and rather than having our protagonists dimension-hop on their own volition, Baxter comes up with a big blue portal to scoop up beings from various universes and deposit them on its accompanying red moon.

If you’re a Sci-Fi reader who’s not into Quantum Physics, don’t despair.  You can just as easily read this as an alt-history novel where all the long-gone hominids (Cro-Magnons, Neandertals, and a host of earlier species) still exist, along with homo sapiens snatched from various points in our recorded history.  It may seem like our modern-day heroes would have a natural advantage, but when they’re transported without warning, they're carrying very few technological gadgets,  They're forced to be hunter-gatherers, which means every other critter is on equal footing.

The chapters are titled according to whichever character’s POV will be followed, and this inherently leads to rich, deep character development.  It was a pleasant change to read about a world where homo sapiens are not the smartest species around.  The book is superbly structured.  Stephen Baxter blends in each new species/tribe gradually, allowing the reader to get to familiar with each of them before introducing a new set.  There are lots of plot twists and “hard science” to ponder.  That new moon is 4x bigger and 20x heavier than our old moon, and its tidal effect on Earth is humanity-threatening.

The storyline is gritty, and includes things like rape, flatulence, shitting, periods, cannibalism, erections, hand-jobs, and cold-blooded murder.  I think it made for a realistic tale - life in paleolithic times was indeed brutal - but if you’re the kind who got upset when the lions catch and eat the poor antelopes in those old nature documentaries, you may want to skip this book.

Excerpts...
“Are you religious now?”
“No.”  He had tried, for the sake of the priest, Monica Chaum, as much as anybody else.  But, unlike some who came back from space charged with religious zeal, Malenfant had lost it all when he made his first flight into orbit.  Space was just too immense.  Humans were like ants on a log, adrift in some vast river.  How could any Earth-based ritual come close to the truth of the God who had made such a universe?  (pg. 90)

When Manekato was two years old she had been shut in a room with a number of other children, and a handful of artifacts: a grain of sand, a rock crystal, a bowl of water, a bellows, a leaf, other objects.  And the children were told to deduce the nature of the universe from the contents of the room.
Of course the results of such trials varied – in fact the variations were often interesting, offering insights into scientific understanding, the nature of reality, the psychology of the developing mind.  But most children, working by native logic, quickly converged on a universe of planets and stars and galaxies.  Even though they had never seen a single star.
Stars were trivial mechanisms, after all, compared to the simplest bacterium.  (pg. 252)

“A pinch of observation is worth a mountain of hypothesis.”  (pg. 210 )
The storyline builds to a plausible ending, but it is happy, sad, hopeful, and bleak all at the same time.  Stephen Baxter even supplies an original and imaginative possible answer to the Fermi paradox (if there are other beings in the Universe, why haven’t we seen evidence of them?).  I liked that.

Not all of the threads are tied up.  We never do find out who taught the various hominids their rudimentary English; who built the blue portal and red moon and why (although we are given some hints); or what became of The Ancients.  The most important goal – to stop the moon and portal from wreaking their multidimensional havoc – is not achieved; and we never learn why someone built the people-scooper/moon-dumper.  At least one loose plot thread, Maxie, stays unresolved, although it is obvious this was deliberate on the author’s part.   Yet I don’t believe Baxter has any plans to add a fourth book to this series.

But I wouldn’t expect an epic story on the cosmic scale of Manifold: Origin to wrap everything up.  That’s not the way the real world works – no matter which dimension you find yourself in.

9½ Stars.  The whole Manifold series is a fine read, but I thought Manifold: Origin was the most coherent of the three, and therefore the best.  Stephen Baxter is a fantastic Sci-Fi writer, and if you like this genre, particularly “hard” Science Fiction, by all means pick up one of his books.
Posted by Hamilcar Barca at 6:13 PM