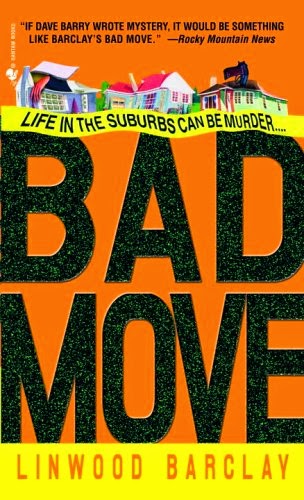 Science Fiction writer Zack Walker is tired of living in the city, what with its druggies, hookers, and street hoodlums.  So he sells his house and moves his family (wife, two teenage kids) to a place called Oakwood, in the ‘burbs.  To a development with the impressive name of Valley Forest Estates.

It’s a quiet place, a perfect environment for finishing his next novel.  A pleasant little Eden.  Well, except for the leaking plumbing in his new home.  And the Mississauga Salamander in Willow Creek.  And the body he finds there.

What’s To Like...
There’s plenty of thrills and even a couple of spills.  After a slow start (the first 10% or so), the plot moves along at a fast pace.  But really, the story plays second fiddle to the wit and antics.  The action and plot-twists are often over-the-top, but that’s in keeping with the tone of the book.

I liked Zack Walker.  He’s not the brightest bulb in the candelabra (in fact, he may well be the dimmest), but he’s funny and means well.  He cares about his family, although his OCD nature often makes him a PITA for others to tolerate.  Most of his “plans” go amiss, and most of his mental conclusions are wrong.

With one exception, the rest of the characters are black and white.  You easily fathom out all the baddies, but figuring out which ones did which bits of evilness is a fun challenge.

Cusswords are commonplace, but not excessive.  There is some sex.  This is a light read for adults, but probably shouldn’t be given out to the kiddies.

All the threads get tied up, and this leads to a stutter-step ending.  The main issue is resolved around 90%, and I kept wondering what the last 10% was going to deal with.  Bad Move is a standalone novel, but also part of a series.

Excerpts...
“It’s not that big of a job.  I might be able to do it myself.”
“You’re joking.”
“I could take a shot at it.  I’ve got the caulking gun.  I could put some stuff in the corners of the shower, see if that took care of the problem.”
“I’ve seen what you can do with a caulking gun.  There should be a three-day waiting period before people like you are allowed to own one.”  (loc. 750)

As we drove to General Mart, I found myself looking in the rear-view mirror more than I usually do.  I figured someone would be after me.  Someone should be after me.
I had, after all, stolen something.  But I was not, I told myself, a purse snatcher.  Not technically.  A purse snatcher was someone who ripped handbags from the clutches of their owners, usually little old ladies who didn’t have the strength to hang on to them and who got knocked down in the process, suffering a broken hip.  I had broken no little old hips.  (loc. 1738)

Kindle Details...
Bad Move sells for $5.99 at Amazon.  The other three books (so far) in the series sell for the same price.  Linwood Barclay has another dozen or so books available.  Most seem to be more serious-toned crime novels, but there are a couple of humor books, including the hilariously titled Mike Harris Made Me Eat My Dog.  I borrowed the Kindle version of Bad Move from my local library.

”How many times have we told you not to pretend you’ve killed yourself?”  (loc. 850)
Bad Move seems to have carved out a niche of its own, genre-wise.  It’s not a whodunit; you don’t “solve” the case alongside Zack.  Nor is it a Murder-Mystery, since the perp of one of the killings is revealed early on.

I list it as a “Crime-Humor” story; but it’s different from a Carl Hiaasen or Donald Westlake offering.  The best comparison I can make is it’s kinda like the old television series Kolchak, but with the main character resembling Monk.

Once I got the genre issue straightened out, Bad Move became a page-turner for me.  I will probably read some more in the series, since the library has them available as e-books.

8 Stars.  Full disclosure.  This book was recommended to me by my cousin Janet, and I have yet to be steered wrong by her.  It helps to have someone close by with excellent literary tastes.
Posted by Hamilcar Barca at 6:26 PM