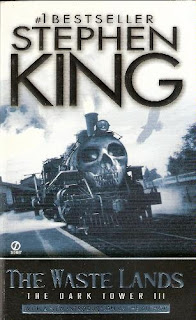 With Eddie and Susannah having been extracted and enlisted for Roland's search for the Dark Tower in Book 2 (The Drawing of the Three), the quest now begins in earnest.

The direction is easy - there is a subtle but persistent "beam" showing a straight path heading southeast; but the distance to be traveled is mind-staggeringly huge.   And the journey of a thousand miles begins with a kill-or-be-killed encounter with a cyborg bear.  So it's time to get moving.

What's To Like...
The first half of the book deals with adding two more questors - one familiar, one new.  There are thrills and mysteries; riddles and choo-choos, and of course, some patented Stephen King horror episodes.

Once the band has been assembled, it's on to a geezer village to rest and stock up.  Cuz next stop is the city of Lud, and that's where the action really heats up.

There are strong characters-with-disabilities throughout this series, reminiscent of Robert Heinlein stories.  And the billy-bumblers are delightful.  It is somewhat strange to combine an epic fantasy quest with horror, but King handles it adeptly.

Excerpts...
This is the way he was when he still had wars to fight and men to lead and his old friends around him, she thought.  How he was before the world moved on and he moved on with it, chasing that man Walter.  This is how he was before the Big Empty turned him inward on himself and made him strange.  (pg. 319)

"They must have been the Supreme Court, or something," Eddie said, uneasily scanning all those thin lips and cracked, empty eyes.  "Only judges can look so smart and so completely pissed off at the same time - you're talking to a guy who knows.  There isn't one of them who looks like he'd give a crippled crab a crutch."  (pg. 483)

"This time-travel business is some confusing shit, isn't it?"  (pg. 93)
To be honest, there are a couple slow spots in the first half of The Waste Lands but there are enough action sequences to keep your interest.  Some of the episodes, such as the geezer village and "the house", seem disconnected from the main storyline.  Maybe they get tied in at a later point; maybe not.  But this is a minor quibble; even Tolkien had his Tom Bombadil.

The second half of the book is excellent.  The excitement is nonstop, and the attention stays focused on the quest.  My only beef is the tawdry use of a cliffhanger ending.  -½ Star for that.  I will read the next book, Mr. King, but that's due to the overall merits of this one; not because of some hung cliff.

The Waste Lands is the best so far in this Dark Tower heptad.  We shall see if Book 4 (Wizard & Glass)  maintains the pace.  8½ stars.
Posted by Hamilcar Barca at 6:22 PM