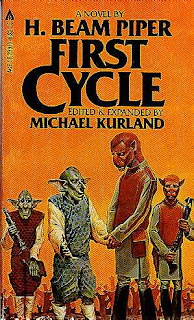 Hetaira and Thalassa are twin planets in a foreign - yet strangely familiar - solar system.  First Cycle is their history, from Day 1 (literally) until the present.  And the present is just a cosmic eyeblink since they discovered sentient life on each other.

What's To Like...
Hetaira and Thalassa may be twins, but they're not identical twins.  One of them (Thalassa) got the lion's share of the available water when they formed, and this influenced both planets' evolutionary patterns.

There are other differences as well.  One uses gods and magic to guide them; the other relies on reasoning.  One has a centralized government; the other is just a bunch of decentralized clans.  And the beings on one have five fingers (just like us); while the natives on the other planet have six (a kewl extra opposable thumb).

What is impressive is the even treatment of these differences.  As communication between the races improves, mutual incomprehension increases.  In the end, their actions - whether imparted by deities or derived from logic - are remarkably similar.

Despite being only 200 pages long, this is an epic tale.  We start with the planets' formation, and their long paths of evolution are recounted.  Interesting, but it comes at a cost of a slow start and most characters appearing only briefly before blinking out.

Kewlest New Word...
There were none that floated my boat.

Excerpts...
They had no gods, and the very concept of a supreme being was incomprehensible to them.  They asked questions, and they accepted nothing on faith.  They asked:  What is it?  What holds it up?  How far away is it?  What is it really like?  They of Hetaira had escaped the two blind alleys of religion and magic; they had already learned that things of nature had natural causes, and that if one were smart enough to ask the proper questions, nature would not withhold its secrets.  (pg. 29)

"But their attitude, and their behavior; I don't know how long I can stand it.  They have no sense of shame or morality.  They degrade women by letting them do men's work."
"They do seem to have complete equality of the sexes," Skrov-Rogov said.
"Disgusting!" the priest said."And have you seen how they behave toward each other?  Running around naked; both sexes bathing together.  And they certainly like to bathe - they're the cleanest beasts I ever saw."  (pg. 170)

"They riot for bread - and they begin by destroying the bakeries!"  (pg. 111)
There are joint authors.  First Cycle was published in 1982.  H. Beam Piper is listed as the author, but he died in 1964.  Michael Kurland "expanded and editied" it from an outline found in Piper's papers after the latter's death.  It is a nice balance between Science and Fiction.  It is also very ambitious and complex, so if you view it as 50's Sci-Fi, it is decades ahead of its time.

First Cycle has a more serious than Piper's "Little Fuzzy" series.  It has a lot to say about religion, government, science, philosophy, etc.  It even takes a prehumous (as opposed to "posthumous") poke at the efforts of the SETI folks.

Life evolves, and so does Literature.  There are science fiction books today that are more "epic" than this, but none do it in only 200 pages.  First Cycle is one of the few books that can be called a "Short-Winded Saga".  7 Stars.
Posted by Hamilcar Barca at 5:44 PM