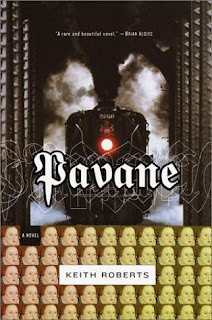 In an alternate timeline, Queen Elizabeth 1 is assassinated, the Spanish armada conquers England, there is no Protestant Reformation, and the Vatican is the unquestioned ruler of all of Western civilization for centuries thereafter.

Until the present.  Now, in 20th-century England, the seeds of revolt begin to take root.

What's To Like...
Pavane was written in the 60's when Alt-History was mostly simplistic pap.  So it is a quantum leap forward for the genre.  Keith Roberts creates a dark, somber England, where only a privileged few are wealthy and everyone else is happy just to be able to put food on the table.  The Church has outlawed electricity and gas-powered engines, so Pavane is a also kewl forerunner of the Steampunk genre.

The book consists of six short stories (musical "measures" in a pavane), which cover several generations of a family as they gradually begin to question and then resist the absolute authority of Rome.  It is much in the style of How The West Was Won, if you've ever seen that movie.

There is some action (particularly in the last story), but not a lot.  The emphasis is on the people, and their evolving mindset, not on blood and gore.  Mass communication is done by a kewl Semaphore system (is this where Terry Pratchett got his idea for the semaphores in the DiscWorld universe?).  The "good guys" are well-developed, but the "bad guys" are mostly without redeeming values.

Kewlest New Word...
Bumph : Reading materials that you must read and deal with, but which you think are extremely boring.

Excerpts...
It was odd; but now, he felt he could talk to the old man.  Now he could explain his hopes, his fears...  Only now was too late; because Eli was dead and gone, six foot of Dorset muck on his chest.  Was that the way of the world?  Did people always feel they could talk, and talk, when it was just a bit too late?  (pg. 26)

"Yes", she said.  "It's like a ... dance somehow, a minuet or a pavane.  Something stately and pointless, with all its steps set out.  With a beginning, and an end..."  She tucked her legs under her, as she sat beside the fire.  "Sir John," she said, "sometimes I think life's all a mass of significance, all sorts of strands and threads woven like a tapestry or a brocade.
"So if you pulled one out or broke it, the pattern would alter right back through the cloth.  Then I think... it's all totally pointless, it would make just as much sense backwards or forwards, effects leading to causes and those to more effects... maybe that's what will happen when we get to the end of Time.  The whole world will shott undone like a spring, and wind itself back to the start..."  (pgs. 247-48)

Time is forever and scurry and bustle can wait.  (pg. 62)
Pavane starts slow, and the early lack of action will be off-oputting to a lot of Alt-History fans who pick up this book.  A lot of readers also didn't like the ending (the "Coda"), but I thought it completed the story beautifully.

If you're looking for a slash-and-bash Alt-History tale (and I for one enjoy those), then it's best to skip Pavane.  But if you want to observe how the mindset of a populace slowly-but-steadily learns of, accepts, and finally embraces rebellion (which is historically true in most revolutions.  A single act, such as Bunker Hill, is simply the flashpoint), then you may find this to be an excellent novel.  7½ Stars.
Posted by Hamilcar Barca at 6:21 PM