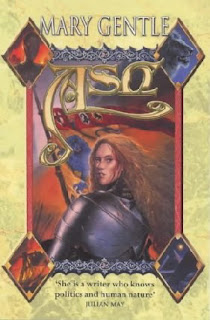 Oh, Ash.  You and your band of mercenaries are holed up in 15th-century Dijon.  Actually, you command all the forces there, about 2,000 fighters all told.  Unfortunately, there are 15,000 Visigoths besieging you.

They have catapults, Greek fire, and giant stone Golems that are nearly indestructible.  You don't.  They have food; you don't.  They have reinforcements on the way; the northern armies you were counting on have been annihilated, with their leaders' severed heads tossed on your doorstep.  The author has made it clear - there will be no deus ex machina.  Whatcha gonna do, Ash?

What's To Like...
The siege has been going on since 1/3 of the way through Book #3.  A lot of Book #4 is more of the same.  Mary Gentle keeps it interesting, even though Ash is at her best when she's hacking and slashing, not hunkering down behind city walls.

The Alt-History is realistic and fascinating.  Mithraism is a major religion.  The Turkish Saracens come off as un-stereotypically noble-minded.  Ms. Gentle even deftly weaves the modern-day issue of gays in the military into the storyline.  The constant detailing of every weapon and piece of armor may be off-putting to some, but I thought it enhanced the believability of the novel.

Excerpts...
I think that I had almost come to believe in Vaughan Davies's theory out of sheer desperation - that there actually has been a 'first history' of the world, which was wiped out in some fashion, and that we now inhabit a 'second history', into which bits of the first have somehow survived.  That Ash's history was first genuine, and has now been - fading, if you like - to Romance, to a cycle of legends.  (pg. 783)

White showed in his priest-cropped hair, as well as his beard.  He reached for his Briar Cross with his free hand; large, capable, and scarred.  A workman's hand.  His eyes were dark as the sow's, and each detail of his face was clear to her, as if she had not seen him for months and now he suddenly was before her.
"You think you'll always remember the face," Ash whispered, "but it's the first thing to go."
-You think there will always be time.
"You try to fix it in your mind..."  Ash stirred, on the mattress.  Like water sinking through sand, the clear dream of Godfrey Maximillian in the snow sank away.  She tried to hold it; felt it sliding from her mind.  (pg. 984)

"You hunted a myth.  I made it real."  (pg. 780)
Burgundy Lost is Book #4 of the Ash Chronicles, but I never did find it.  Instead I came across a copy of the British edition, which is a 1200-page, all-in-one tome.  The page numbers in the Excerpts reflect that, as does the book cover image.  British readers apparently have longer attention spans than us Yanks.

The pacing is a bit uneven.  Book #3 covers only two days, and a large chunk of Book #4 stalls on Christmas Day, 1476.  There is a second storyline, the present day, told via e-mails.  A lot of people didn't like this, but I found it to be an effective set of entr' actes, nicely separating the chapters.

Then there's the ending.  What a fantastic way of wrapping up an epic!  This is a spoiler-free blog, so we'll refrain from giving details.  But it truly is an innovative resolution of what to do with our doomed heroine.

You can call this series (or 'this book' if you're reading it in England) Alt-History, or Historical Fiction, or just plain, old Fantasy.  It excels in all genres.  9 Stars, and that applies to both Burgundy Lost and the series as a whole.
Posted by Hamilcar Barca at 6:18 PM