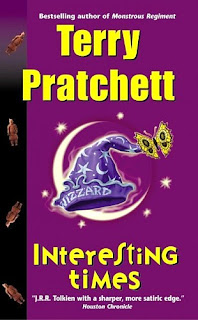 When the inscrutable Agatean Empire on the faraway Counterweight Continent sends a message tio Ankh-Morpork requesting "the great Wizzard", they can only mean one person.  That would be Rincewind, who is so thoroughly incompetent that even the one word on his hat is misspelled : "Wizzard".  Why would the Agateans want such a schlep?  That's inscrutable.

What's To Like...
It has Rincewind, who's probably my favorite Discworld character.  It has The Luggage.  It has Cohen the Barbarian and his Silver Horde.  DEATH makes a cameo appearance.  And we meet up again with Twoflower, whom we hadn't seen since Book #2.

The Agatean Empire is an obvious embodiment of China, so that's a big plus for me.  There are lots of references to Chinese culture and history, as well as the Mandarin language itself.  It verges on stereotyping, but I'll give Pratchett the benefit of the doubt, and assume it's all tongue-in-cheek.

This is mostly a light-hearted tale, but woven within is some subtle commentary about revolutions ("Meet the new boss; same as the old boss") and lessons that geriatric geezers can still teach young 'uns.

Kewlest New Word...
Leylines : Alleged alignments of a number of places of geographical or metaphysical interest.  (Who knew there was such a term?)

Excerpts...
Cohen smiled proprietorially.
"Truckle used to be reckoned one of the biggest badasses in the world," he said.
"Really?  Him?"
"But it's amazing what you can do with a herbal suppository."
"Up yours, mister," said Truckle.  (pg. 84)

Agatean was a language of few basic syllables.  It was really all in the tone, inflection, and context.  Otherwise, the word for military leader was also the word for long-tailed marmot, male sexual organ, and ancient chicken coop.  (pg. 92; and very true of Mandarin)

"How about Organdy Sloggo?  Still going strong down in Howondaland, last I heard."
"Dead.  Metal poisoning."
"How?"
"Three swords through the stomach."  (pg. 333)

"When many expect a mighty stallion they will find hooves on an ant."  (pg. 118)
At  book #17, Interesting Times is a "tweener" in Terry Pratchett's Discworld series.  The early books were pure tale-telling; and the later ones deal with heavier themes, such as hooliganism and bigotry.  This is a nice blend of those two motifs.

The storyline moves along nicely, and builds to an exciting and unexpected (unless you're Rincewind) climax.  The only things it's missing are the complex and divergent subplots that are typically present and which Pratchett always deftly weaves into a coherent conclusion.  I am of course in awe of his ability to do this, but their absence here seems to allow Interesting Times to stay more focused than usual throughout.  9 Stars.
Posted by Hamilcar Barca at 8:34 PM

plots:
1 intention to take over Ankh-Morpork
2 different attempts to take over Agatean Empire: 1 by main villain, 1 by professional barbarian hero
1 induced but also becoming real native revolt against Emperor
1 ongoing attempt to survive by Rincewind
1 naive author who takes revenge for the loss of his wife
1 romance of a many-legged entity

good point about the plotlines! for the most part (outside of The Luggage), they involve Lord Hong and his many ambitions. but his plans for power literally span the globe. well, span the disc anyway.

in any event, Interesting Times is a top-tier Discworld story - right up there with Guards! Guards!; Night Watch, etc. and i still haven't read most of the ones starring the Witches and DEATH.