In The Garden of Iden - Kage Baker 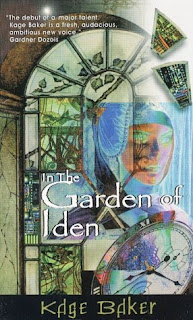 1997; 294 pages. Genre : A mixed bag (see below). New Author?: Yes. Book #1 (out of 8) in Baker's "Company" series. Overall Rating : 7½*/10.
.
In 1541, a five-year old girl called Mendoza is about to die in the Spanish Inquisition, when she is rescued and turned into a cyborg immortal via drugs, hormones, implants, and training. She now works for the Company, a shadowy 24th-century organization who has mastered time-travel and is into acquiring lost works of art and relics, as well as extinct plants and animals.
.
After 15 years of prepping to be a botanist, Mendoza is part of a team of operatives sent to England during the time of the Counter Reformation (the 1560's). Her assignment is to acquire a number of valuable (and soon to be extinct) plants, without the pitiable mortals knowing it. But at the estate of Sir Walter Iden, Mendoza discovers several things : lousy English weather, lots of priceless plants, a unicorn, unsanitary food, religious fanaticism in several colors, and one Nicholas Harpole, who makes her cyborg heart (other other bodily parts) go all a-twitter.
.
What's To Like...
The book starts out being a sci-fi time-travel story. After about 50 pages, it decides instead to be historical fiction. And after another 75 pages, it morphs into a romance novel instead. So if you don't like the genre, just wait a few pages and it will change. There are also some adult themes (violence, sex, etc.), despite this being classified a YA book. And it has both serious and funny moments.
.
The characters are likeable. Besides Mendoza, the cyborg team consists of animal-collector (and confidante) "Nef", technical pro Flavius (who stays in London and issues some hilarious radio reports), and wise-but-cyinical team-leader Joseph. Sir Walter is a clueless hoot, and Nicholas is a troubled-yet-lovable soul.
.
The time-travel and immortality rationale is cleverly done. But for me, the best thing about the book was the attention to the historical setting. In the Garden of Iden made me feel like I was there in 16th-century England. Not many alt-history books do that.
.
If you're looking for lots of sci-fi, killing and bloodshed, or graphic sex; you might be disappointed. This is "drama" (except for the very beginning and very end), and a set-up to the rest of the books in the series. Even romance-lovers may feel a bit let down.
.
Kewl New Words...
There were a bunch. Prognathous : having a projecting lower jaw. Settle (n) : a long wooden bench with a high back. Gibbet : a gallows. Catamite : a boy kept by a pederast (this in a YA book??). Pomander : a mixture of aromatic substances, enclosed in a bag and used for protection against odor or infection. Caitiff : a cowardly or despicable person. Biretta : a stiff cap with ridges across the crown, such as worn by Roman Catholic clergy. Sophistry : plausible but false argument. Quondam : former; erstwhile. Here : "quondam countrymen". Maunder : to wander aimlessly. Dandle : to playfully dance or bounce a child up and down on one's knee or in one's arms. Pullulating : swarming or teeming (like a hive of bees). Posset : sweet, spiced milk curdled with ale or beer.
.
Excerpts...
It was a good decision because I really loved the things I grew. The leaf that spreads in the sunlight is the only holiness there is. I haven't found holiness in faiths of mortals, nor in their music, nor in their dreams: it's out in the open field, with the green rows looking at the sky. (pg. 46)
.
"I remember one of mine once. Golly. She was a sweet thing, you know, and I was just nuts about her, but she had this devotion to Ishtar and you simply could not argue with her. I had to become an initiate, go the whole route. When she finally died, I was heartbroken, really, I just moped around for weeks, but on the other hand - it was so nice not to have to paint my ass blue and go whack the heads off doves at the temple every night. Always date atheists, that's my advice." (pg. 173)
.
"Funny thing about those Middle Ages," said Joseph. "They just keep coming back. Mortals keep thinking they're in Modern Times, you know, they get all this neat technology and pass all these humanitarian laws, and then something happens: there's an economic crisis, or science makes some discovery people can't deal with. And boom, people go right back to burning Jews and selling pieces of the true Cross." (pg. 192)
.
A few words about Kage Baker...
Born in 1952, Kage Baker burst into the sci-fi spotlight in 1997 with In The Garden of Iden, and her "Company" series garnered several sci-fi awards over the next decade. Alas, the light has gone out; she passed away in January of this year.
.
This is the purpose of my life. Men burned; flowers were rescued. (pg. 236)
Although In The Garden Of Iden teetered on the edge of too much "icky romance", it never quite fell off. Genre-mixing is always a risk, but somehow it works here. The big question is whether the rest of the series reverts back to its sci-fi roots (that's where I found it at my local library) or instead devolves into a two-bit pulp romance, like Auel's Clan of the Cave Bear series did. We shall see. 7½ Stars.
Posted by Hamilcar Barca at 4:55 PM

I think this is really interesting about the genre-mixing. That would be risky and hard to pull off but it sounds like it worked here. I like what you said: So if you don't like the genre, just wait a few pages and it will change.

it would be interesting to see if romance novel readers like this book. in that respect, it had (for me) an unexpected ending.