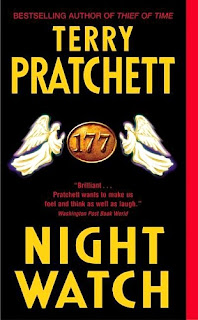 2002; 408 pages. Book 29 in the Discworld series. Awards : #73 in the Big Read; Prometheus Award winner - 2003; nominee for Locus Award - 2003. Genre : Fantasy; Humor. Overall Rating : 9*/10.
.
Just as (Captain of the Night Watch) Sam Vimes is about to nab a psychopathic killer, both of them are transported 30 years back in time. It is a different Ankh-Morpork that they find themselves in. The Night Watch bumbles; policemen ponce, the Patrician oppresses, rebellion seethes, and plotters plot. It's a bad place for a good cop, but a killer can make a killing here.
.
What's To Like...
There is time-travel, albeit without much control. There are zen-like History Monks trying to put everything back in order. And there are 30-years-younger versions of a number of Ankh-Morpork's finest citizens - Nobby Nobbs, Fred Colon, Havelock Vetinari, Cut-Me-Own-Throat Dibbler, and naturally, a pair of Sam Vimes - the naive rookie and the grizzled veteran.
.
The plot itself takes center stage in Night Watch, which is unusual for a Discworld book. Normally the themes (such as Basketball, Diplomacy, Football Hooligans, etc.) or the zaniness (such as the crazy antics of Rincewind or the Witches) are in the spotlight, with just enough of a plot to hold things together. Not so here.
.
There's not much to quibble about. If you've never read a Discworld book, this is probably not a good one to start with. That's about it.
.
Kewl New Words...
Prima Gravida : a woman pregnant for the first time. Shonky : cheap, shoddy, and with a social stigma. Used here, "a shonky shop". Pastille : a lozenge, a cough drop. Ponce : to take with permission, but in an "extortion" sense. Gormless : stupid, dull (British slang). Skiver : a slacker, a loafer, a do-nothing (British slang).
.
Excerpts...
"Slidey Harris was unlucky at cards last night, that's all. Played the ace of hearts."
'That's an unlucky card?"
"It is if Big Tony knows he didn't deal it to you. But I'll soon have it removed." (pg.138)
.
"I have no idea of how things are going to turn out! I mean, doesn't it change history even if you just tread on an ant?"
"For the ant, certainly," said Qu. (pg. 240)
.
Maybe the monks were right. Changing history is like damming a river. It'll find its way around. (pg. 306)
.
Ave! Bossa nova, similis bossa seneca!
(Here comes the new boss, same as the old boss) (pg. 360)
Night Watch is darker and more serious than most Discworld books. There aren't as many ha-ha's, and there's no discernible theme. It's almost as if Pratchett wanted to demonstrate that he could write literature, if he so desired.
.
Being out of his element, this really shouldn't have worked. But it does. Nine stars.
Posted by Hamilcar Barca at 5:44 PM